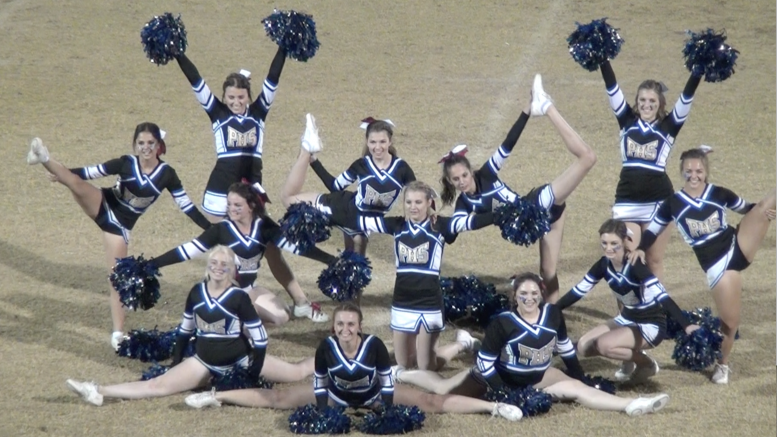 Jon Johnson Photo/Gila Valley Central: Pima had a lot to cheer about Friday as it beat Morenci 30-0. The Roughriders will host Gilbert Christian on Saturday in its opening game of the playoffs.

PIMA – Known for its big-play air attack, the Pima Roughriders (8-2 overall, 4-2 section) utilized its ground game coupled with a stifling defense to mystify the Morenci Wildcats (5-5 overall, 2-4 section) to the tune of a 30-0 victory Friday night at Edd Hubbard Field in Pima.

“The kids played strong,” Pima head coach Jace Hancock said. “(It) was a good finish for us.”

Pima’s defense bent but never broke, stifling Morenci to three punts and two turnovers on downs in the first half and a punt and three turnovers on downs in the second half. Morenci moved the ball at times – entering Pima’s red zone at least three times – but couldn’t cross the end zone, including a goal line stand by the Roughriders when the Wildcats had a first and goal from the 3 yard line stuffed on four straight runs.

“We just didn’t execute,” Morenci head coach Gary Sandoval said. “That’s what it comes down to. Pima did a good job, and we just (have) to work on the small things and get after it.”

Pima scored touchdowns on three of its four first possessions in the first half with senior Aaron Judd breaking the ice with a 10-yard touchdown run with 5:11 to go in the first quarter.

After a turnover on downs, it took just two plays for Pima to score as Joshua Whitaker connected with Jarrett Kartchner for a 48-yard touchdown. The pair would connect again later in the second quarter, when Whitaker’s passed zipped by the defense and Kartcher couldn’t be caught on his way to a 60-yard touchdown reception as Pima led 18-0 at the half. 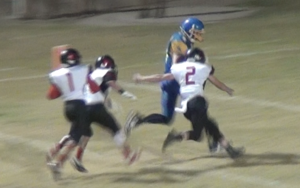 Morenci made some big plays on the night, including a huge first down pickup by Kyle Sarrett in the second quarter after he fumbled the snap in punt formation. And on defense, Morenci’s Gavin Chavez intercepted Whitaker twice on the night. Chavez should have gotten the hat trick, however, as his first interception on Pima’s opening drive was deemed out of the back of the end zone even though the defender actually had possession of the ball and both feet in bounds. 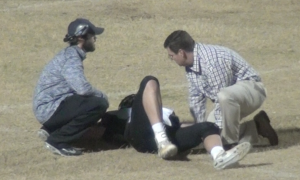 The Wildcats’ biggest loss on the night might have been to their quarterback Kyle Swan, however, who left the game early in the second quarter after coming down awkwardly when hit by the Pima defense. Swan clearly expressed severe pain as he was attended to by Pima’s medical staff and had to be assisted off the field. He later left the area in a personal vehicle during halftime, presumably to receive medical attention.

Pima had its only punt of the night on its opening drive of the third quarter. After forcing a Morneci punt, Pima drove the ball down the field and were aided by a big 25-yard run by Aaron Judd and a 25-yard gain on a screen pass from Whitaker to Emilio Molinar. Judd then finished the drive, scooting 5 yards around the left side for his second rushing touchdown on the night, and Pima was comfortably up 24-0 with 6:07 left in the third quarter.

After keeping Morenci out of the end zone with a goal line stand that started with first and goal from the 3 yard line, Pima gave the ball right back to Morenci on Chavez’s second interception of Whitaker. Pima’s defense held again, however, and Morenci turned the ball over on downs as Pima’s Brayden Brown broke up a pass that was destined for a touchdown an fourth and 6 from Pima’s 20-yard line.

The Roughriders took advantage of the turnover that time, and Whitaker hit Brown on a deep pass that traveled about 50 yards in the air. Brown leapt up and snagged the ball and came down with it at the Wildcats’ 6 yard line.

After a Whitaker quarterback sneak brought the ball to the edge of the goal line, Molinar finished off the drive with an easy plunge, and the Roughriders finished off Morenci, 30-0. 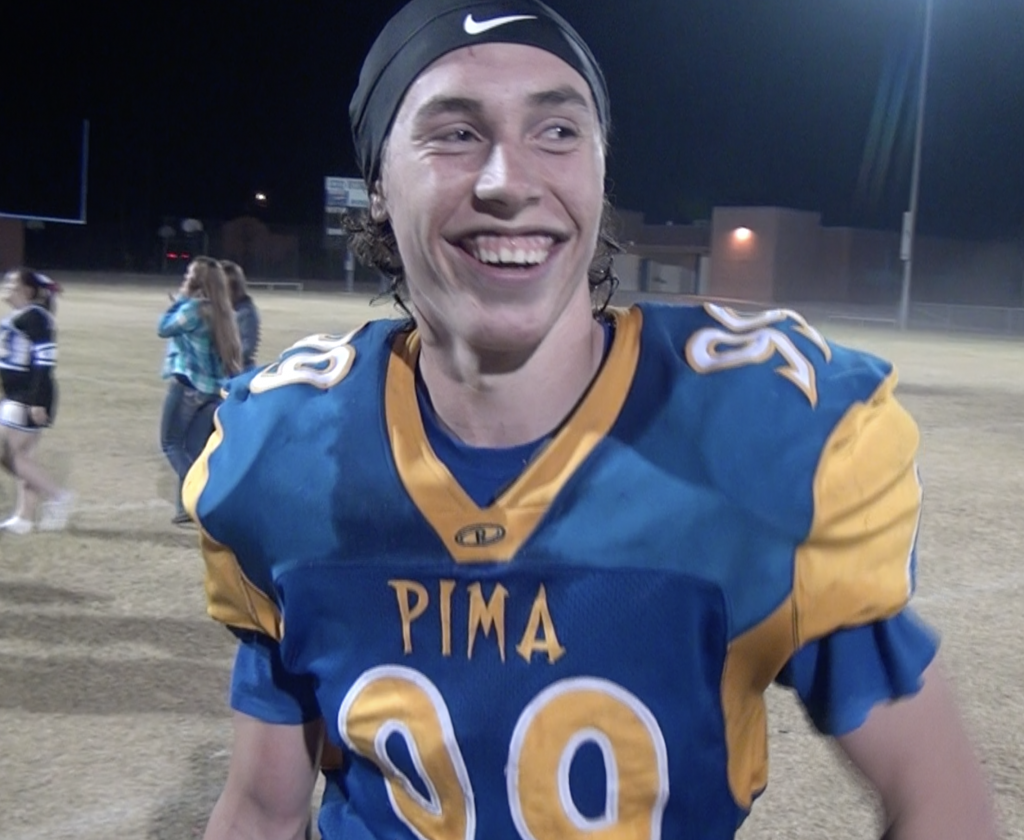 The victory capped a successful season for the Roughriders, who seamlessly made the transition up from 1A, 8-man football to the 2A East, 11-man football division. The only losses Pima had all year were a blowout loss to Thatcher that Pima had to play without its starting quarterback and a last-second loss to Round Valley. Thatcher and Round Valley are ranked number two and one in all of the 2A Division, respectively.

“It’s been a good season,” Hancock said. “I think we at least met everyone’s expectations and maybe exceeded a few, but 8-2 is not bad . . . We learned a lot; the kids had fun and we’re still pushing forward. Hopefully, we’ll have another four games in us.”

“I just think that we have what it takes to take a state championship,” Pima senior Justin Kartchner said. “That’s our goal; that’s what we’re shooting for.”

Morenci received a number 11 seed and will travel to number 6 seed Phoenix Christian for its game, Saturday at 6 p.m.