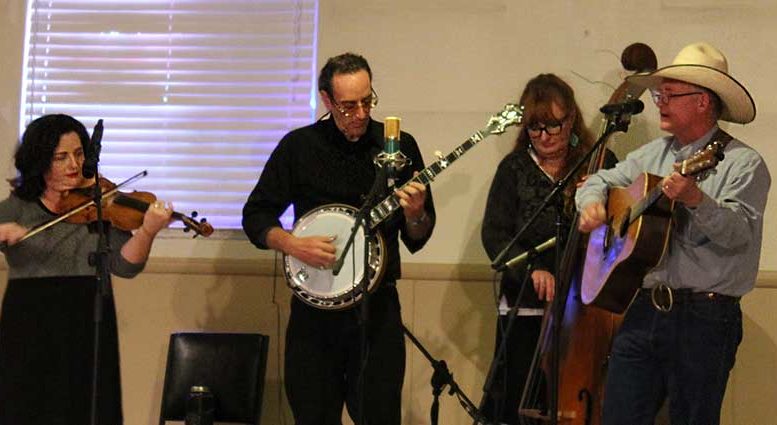 Brooke Curley Photo/Gila Valley Central: The band Crucial Country traveled from out of town to perform the concert to benefit the fiddle contest.

Working with the Graham County Chamber of Commerce, the Eastern Arizona Old Time Fiddlers Association held a benefit concert to raise money for the upcoming fiddle contest in February. This year, the contest will celebrate its 39th year in exitance.

Beth Cox, contest director, said the main performers of the night were Crucial Country. Sadly, one band had to cancel, but Crucial Country agreed to start their performance early. With a break in the middle of the evening, the band played hard while the contest supporters watched or danced along to the music.

Earlier that day, Cox told Gila Valley Central that the benefit concert for the fiddler contest was a work of support by musicians who had grown up on the contest stage.

“These guys all grew up on this stage and that’s why they’re working so hard to see it continue,” Cox Said. “Yes, we raise the money and we put on the contest and when the weekend is over we have no money. But it’s tradition. Thirty-nine years has become a tradition, and we’re going to fight for it as long as we can.”

Throughout the interview, Cox gave a brief history of the fiddle competition. According to Cox, the competition first took place in Dragoon. After traveling from Dragoon to the outside of Willcox for a single year, the contest was held in the Gila Valley. The contest has been held in the Gila Valley for more than 30 years, making it a tradition that fiddlers travel from all over the United States to attend.

“People come from all over the United States, literally, to play in this contest,” Cox said. “It is a big deal. Last year we had 168 contestants.”

This year, the 39 annual Fiddle Contest will begin Friday, Feb. 8, and will run through Sunday, Feb. 10. This year, however, the contest will be a little different because it will be sharing the fairgrounds with a rodeo. Cox said instead of being dismayed that they would have to share with the youth rodeo, the fiddlers were excited.

“This year, we tried to coordinate it with a rodeo at the fairgrounds. It will give everyone something to do,” Cox said.

Major winners from the 2017 contest were:

Second Place: Will MacDonald, winner of the $750 prize.