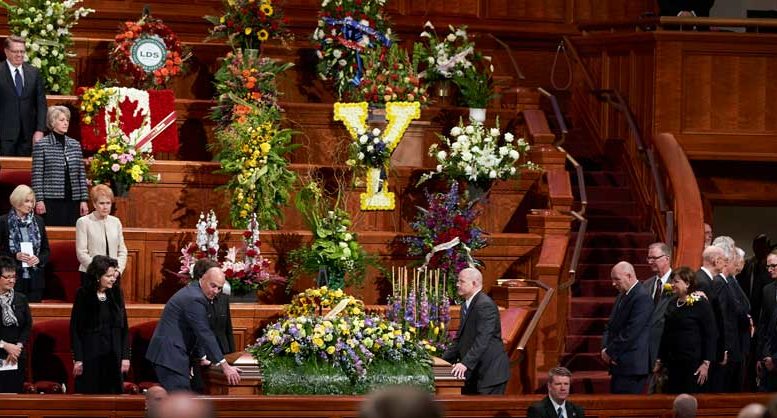 Thousands of people gathered in the Conference Center on Temple Square in Salt Lake City on Friday, January 12, 2018, for the funeral of President Thomas S. Monson of The Church of Jesus Christ of Latter-day Saints. The man revered by Mormons as a prophet of God died in Salt Lake City January 2, 2018, at age 90 from causes incident to age.

Tens of thousands around the world watched the funeral proceedings live in nearly 30 languages on LDS.org and other media channels, as well as on the Church satellite system.

“Our sorrow is assuaged by the Atonement of the Lord Jesus Christ. His bitter cup makes our bereavement bearable,” said President Russell M. Nelson, president of the Quorum of the Twelve Apostles.

“President Monson never sought the limelight,” said President Nelson. “In a world now saturated with ‘selfies,’ he modeled selflessness. … He gave his own time to visit, bless, and love others. Even in his waning season, he continued to minister, making frequent visits to hospitals and senior centers.” 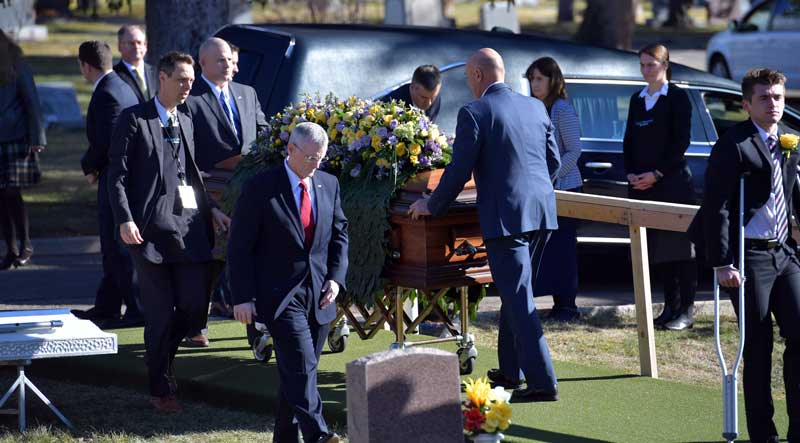 Contributed Photo/Courtesy LDS Church: The casket of LDS President Thomas S. Monson is wheeled from the hearse for burial next to his wife, Frances, at the Salt Lake City Cemetery on Friday, Jan. 12.

The senior apostle acknowledged the many condolences that have been received from dignitaries and others around the world.

“My heart is drawn out to his family and to all who mourn his passing. There are millions of people across the earth who share that sense of loss,” said President Henry B. Eyring, who served as first counselor in the First Presidency under President Monson.

“Caring for others happened often in the ministry of President Monson,” said President Eyring. “The love of God, and love for God’s children, permeated his life. That love began early and endured with him to the end.”

“He abounded in knowledge, faith, love, vision, testimony, courage, and compassion — leading and serving never from a pedestal, but always eye to eye. He had a special place in his heart for the poor and the needy,” he said. 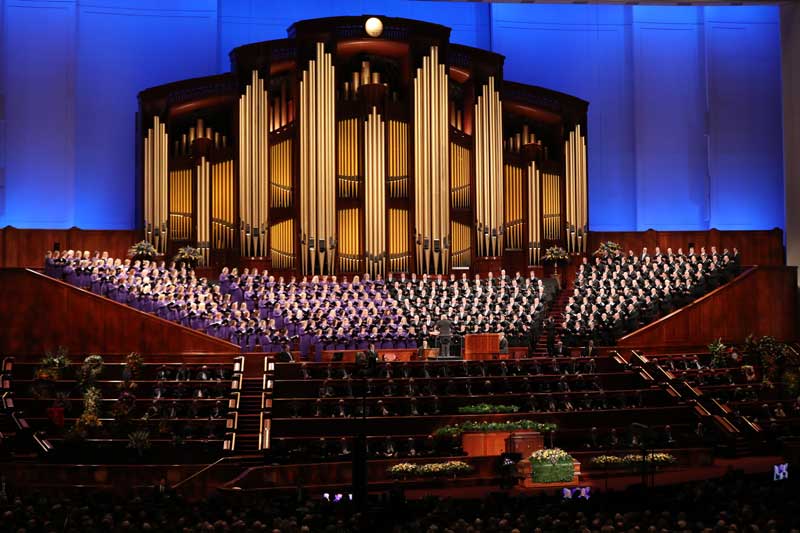 Contributed Photo/Courtesy LDS Church: The Mormon Tabernacle Choir provided sacred music for the funeral services of President Thomas S. Monson, 16th president of The Church of Jesus Christ of Latter-day Saints, on Friday, Jan. 12. The funeral was held in the Conference Center.

President Uchtdorf said he and President Eyring recently visited the president at his home. “President Monson stopped us and said, ‘I love the Savior Jesus Christ. And I know that He loves me.’ What a tender and powerful testimony by a prophet of God.”

The people of Germany were “especially blessed” by President Monson’s ministry as he “promised unthinkable spiritual blessings” behind the Iron Curtain, which were eventually fulfilled, recalled President Uchtdorf.

“I believe that all who knew him, heard or saw him, even if only from afar, considered themselves his friends,” he added. “As Sister Uchtdorf and I traveled the world, people would convey their love, gratitude, and prayers to their beloved prophet.”

“I am profoundly grateful for my father and the legacy he created — a legacy of love and service,” expressed his daughter, Ann M. Dibb, who spoke on behalf of the Monson family. “Although he was a prophet, my father knew he was not perfect. With all his heart, he humbly relied on and tried to be like our Lord and Savior, Jesus Christ.” 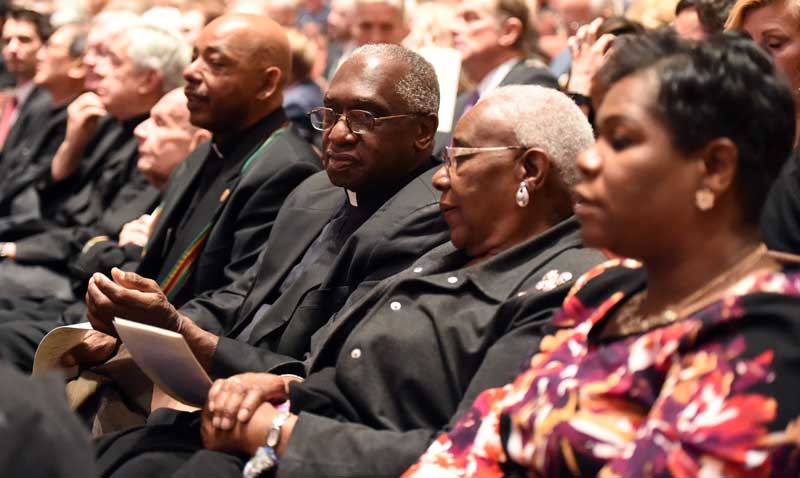 Sister Dibb expressed gratitude for the 54 years of daily prayers that have been offered as her father served as an apostle and then president of the Church. She was often by her father’s side, a promise she made to her mother, Frances, before her passing in 2013.

She continued, “President Monson, by simply trying his best, left an unforgettable legacy of love. He loved the Lord and he loved people. He saw our potential and believed sincerely in our ability to change and progress through the Atonement of Jesus Christ.”

President Nelson said the prophet’s influence has been felt by millions of people around the world. “We are all better because of him. And the Church is better because of him. He leaves a legacy of growth. Since his ordination as an Apostle in 1963, Church membership has risen from 2.1 million to nearly 16 million.” 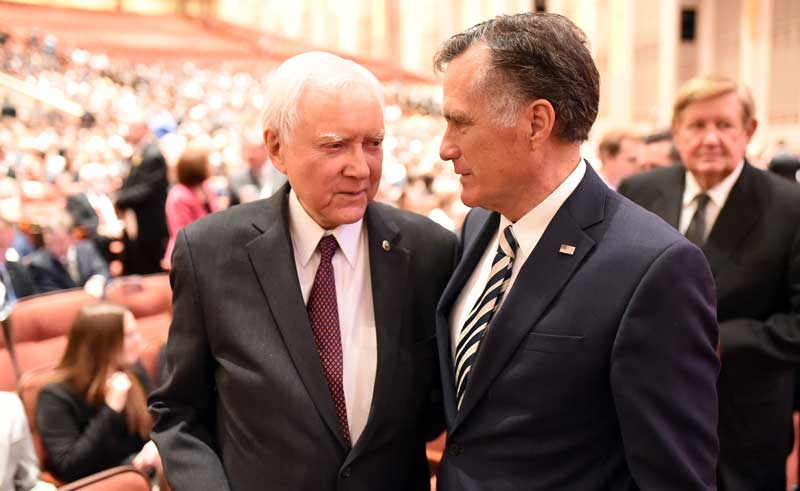 From the time that President Monson was called as an apostle, the missionary force has grown from 5,700 to nearly 70,000 and the number of temples has risen from 12 to 159 operating temples with more under construction and announced.

“We do not need to be the President of the Church to notice another’s need and ‘paint a bright spot on our souls,’” explained Sister Dibb, a phrase often used by President Monson. “By following the promptings of the Spirit, our simple acts of service can also be answers to prayers, and we can carry on this legacy by serving others.”

General Authorities and auxiliary leaders of the Church, as well as a large contingency of community, civic and other faith leaders, joined the Monson family to celebrate his life.

The funeral was conducted by President Eyring. Music was provided by the Mormon Tabernacle Choir. The choir opened the funeral by singing “Consider the Lilies.” Other musical selections included “O Divine Redeemer,” “Dear to the Heart of the Shepherd” and “If the Way Be Full of Trial, Weary Not.”

President Monson is survived by his daughter, Ann M. Dibb, and sons, Clark S. Monson and Thomas L. Monson, as well as eight grandchildren and 12 great-grandchildren. His son Clark offered a family prayer prior to the service.

An estimated 31,500 people passed by President Monson’s casket during a public viewing in the Conference Center’s Hall of the Prophets on Thursday.

His burial was at the Salt Lake City Cemetery, where President Monson’s son Thomas offered a prayer.

President Monson became the 16th president of the Church February 3, 2008, following the passing of President Gordon B. Hinckley. He became an apostle in 1963 at the age of 36 and served as a counselor in the First Presidency under three Church presidents for more than 22 years.

Read more about the life of President Monson on Mormon Newsroom.