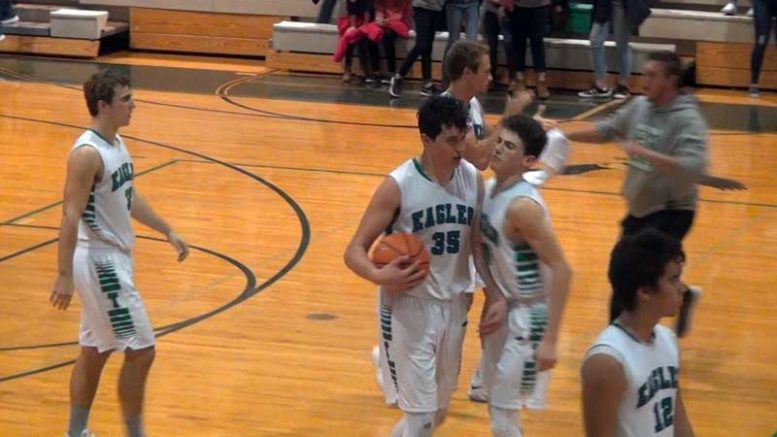 Free throws the difference in the game

THATCHER – Free-throws – it’s something you do every practice and while they become second nature for some players others struggle with them throughout all phases of basketball from pee wee games to the NBA. And when the game is on the line, they can be even more gut-wrenching to take.

Safford had its chances against Thatcher Wednesday night – once with the game tied with virtually no time left on the clock and its player at the free throw line – but Thatcher once again hit its free throws down the stretch as Safford – for the most part – did not, and the Eagles prevailed in overtime, 65-63. 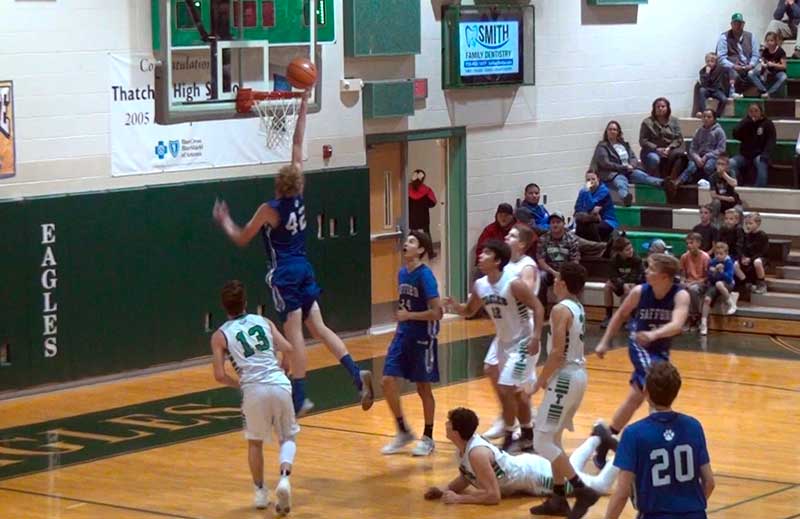 Thatcher took the first meeting of the year at Safford, 66-56, but Safford bounced back during the EAC Holiday Tournament and took out Thatcher, 72-53, on its way to upsetting Pima for the championship. With the win Wednesday, Thatcher retakes the lead for the season.

“It was a good team win for us,” Thatcher head coach Chris Riehemann said.

It was all Thatcher early as Brock Layton slashed and dashed to the hoop and Cole Motes swallowed up the lane on defense to help push the Eagles to a 10-2 lead. Layton would score 13 of his 15 points in the first half and fouled out with three minutes and change left in the game. 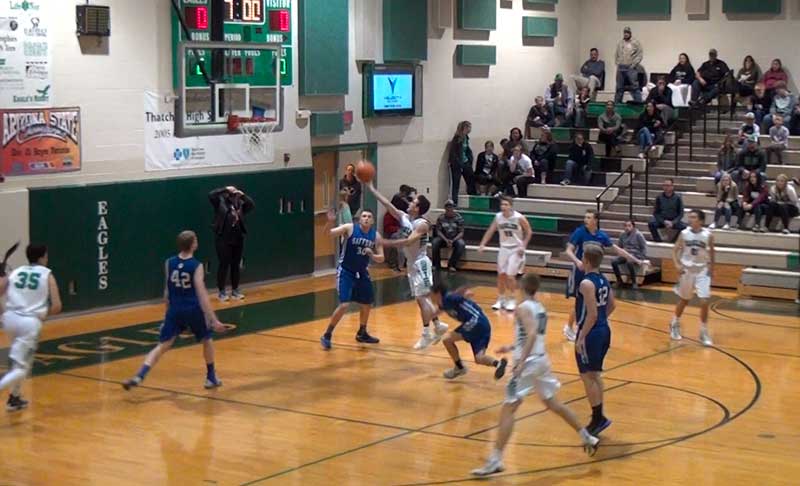 Jon Johnson Photo/Gila Valley Central: Brock Layton scores the first points of the game and was fouled in the process.

Safford came back, however, as it did all night with its scrappy defense and tendency to push the ball. Stratton Baldwin had a big night down low, gathering offensive rebounds for putbacks, finishing with 6 offensive and 8 defensive rebounds. Andrew Smith led all scorers with a game-high 26 points on 8-21 shooting. Smith hit a few big 3’s in the game and was one of the few bright spots at the foul line for Safford, hitting 8-11 from the charity stripe (one he missed on purpose). However, Smith did have 9 turnovers in the contest.

Safford put together a little run that was boosted by its defense toward the end of the first to pull within three, 14-11. Then, in the second period, it’s offense kicked into high gear thanks in part to Collin Thompson, who had 11 of his 15 points in the period. Thompson has been a steady player all season, and averages nearly 15 points per game and shot 7-11 against Thatcher with 9 rebounds to just narrowly missing a double-double.

After Smith hit a free throw, Safford went into halftime with the lead, 31-30. 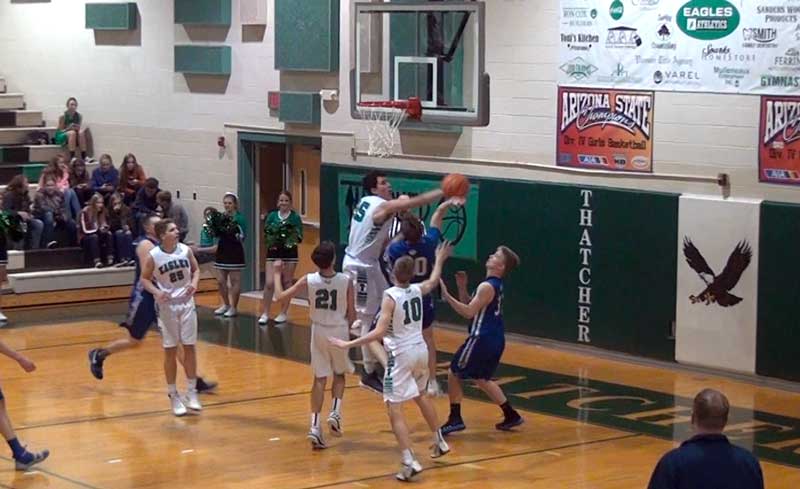 Both teams were a little stagnant in the third period, with Safford only managing eight total points. Of course, the Eagles defense might have had something to do with that as they collapsed on the interior and contested shots.

Every time Safford appeared to pull even, a different Thatcher player stepped up. Football stars Tyler Roebuck and Riley Morris had possibly one of their best games on the hardwood and contributed to their team’s success. Other key if somewhat unknown players for the Eagles were Rulon White, who was streaky smooth hitting a key 3-pointer in overtime as well as being as calm as a cucumber and sinking two foul shots in the same period.

“We talk about take your piece of the puzzle,” Riehemann said. “Some nights it might not be as big. We have a freshman point guard who played a lot of minutes early and not so much late just because we shortened that rotation a little bit in the second half.”

Still, Safford was within shooting distance only down three, 42-39, heading into the fourth period. And after the teams went back and forth, Thompson was run over on a screen with less than a second to play in regulation. Thompson missed the front end, however, and the teams went into overtime knotted up at 52. 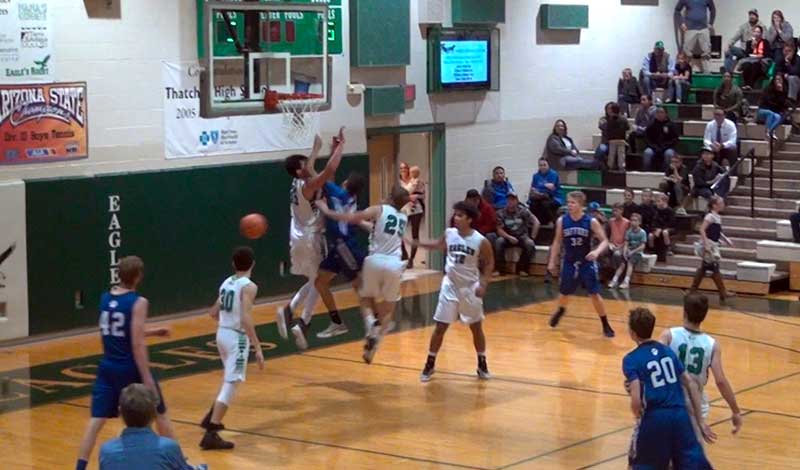 Jon Johnson Photo/Gila Valley Central: Cole Motes was called for an intentional foul on this play but he was the one who actually took an elbow to the face.

Thatcher came blazing out of the overtime with Trenton Ferrin hitting a 3 for his only bucket of the night, followed by White’s 3-pointer.

Safford came right back with a 3-pointer by Smith and had a shot at tying the game with three seconds left but the referee said Smith wasn’t in the act of shooting when he was fouled by White.

After making the first foul shot, Smith intentionally missed the second and Baldwin grabbed the rebound and went up for the tie. The shot missed, but Baldwin was fouled on the play and Safford had yet another chance to tie with just .3 of a second on the clock.

Baldwin missed the first free throw, however, and Motes grabbed the rebound on the second missed free throw, ending the game.

After the game, Gila Valley Central spoke with a couple of Thatcher’s players for their thoughts on the win.

“They’re a great team,” Rulon “True Fro” White said of Safford. “They play amazing defense. They have some amazing drives and quick guys. Once we figured out that help (defense) was the key and that we couldn’t let them get past us it all just kind of came naturally, and I felt like it was something I practiced a lot.”

“We kind of had some bad feelings after the Christmas tournament,” Trenton Ferrin said. “They really kind of throttled us in the tournament, and I feel like we really came together as a team tonight and pulled out the win, so we are grateful for that.”

Safford (12-6 overall) next plays Queen Creek American Leadership Academy on Saturday, Jan. 13 in Queen Creek. The Patriots previously defeated Safford, but that win has turned into a forfeit after ALA was found to have made recruiting violations.

Reportedly, the school inadvertently allowed an international exchange student to play on its football and basketball team while he was technically ineligible. The school reported the incident and had its 3A State Football Championship forfeited as well as its six boys basketball wins this year.