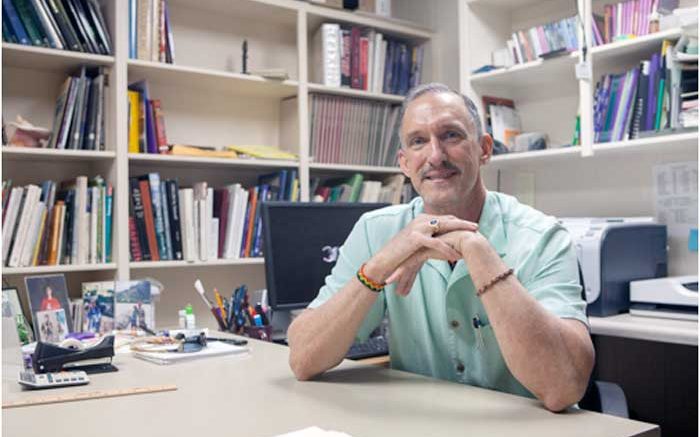 Photo By Todd Haynie: Friends, family, coworkers and community members are invited to a reception honoring the work and career of EAC associate professor of art, Kenny Rhodes, on Monday, March 6, from 5-7 p.m., in the lobby of the EAC Activities Center, where the artist’s body of work will be on display. Rhodes will retire at the end of the semester.

THATCHER — Eastern Arizona College’s Fine Arts Division will hang a very special art show in the lobby of the EAC Activities Center this weekend entitled A Retrospect of 30 years—The Art of Kenny Rhodes. The show will be on display during the entire month of March and will feature the art of beloved EAC art professor, Kenny Rhodes.

Friends, family, coworkers and community members are invited to a reception honoring Rhodes’ work and career Monday evening, March 6, from 5-7 p.m., in the lobby of the EAC Activities Center, where the artist’s body of work will be on display. Rhodes will retire at the end of this semester.

“This display will showcase some of my artistic forays and endeavors during my 30-year career as an art educator,” Rhodes said .

Drawing was one of the ways Rhodes spent his spare time as a child growing up on a small family farm near Fort Thomas. With only three fuzzy channels on a black and white television, he found other ways to entertain himself (which could be worrisome for his poor mother). When he wasn’t doing art, he was usually busy exploring the outdoors and hunting or watching wildlife. Those experiences became the inspiration for Rhodes’ early artwork. For many years, while learning to draw and paint, wildlife became his primary focus.

Rhodes’ educational journey began at Fort Thomas and eventually migrated up the road a few miles to Eastern Arizona College. Upon completion of an Associate of Arts degree in Art, he transferred to the University of Arizona and pursued a degree in graphic design and illustration. That training influenced not only his technique but the style in which he works.

Eventually, he completed a Bachelor of Fine Art in Art Education and a Master of Art in Secondary Education and landed his first teaching job at Safford Middle School. After spending his rookie year at SMS, he accepted a job at his old high school in Fort Thomas as the art teacher, where he stayed for 18 years.

By 2005, Rhodes was ready for a change, so he accepted a position at Eastern Arizona College as the only full-time, fine art instructor and the department chair in the fall of 2006.

“As a program, the art department has really grown,” Rhodes said. “While most people probably think of the theatre and music programs when they hear Fine Arts Division, the art department actually has the highest enrollment in the division. During the 2015-2016 school year, we had 1,358 seats filled in our classes.”

Rhodes and his wife, Tina, of Thatcher, have two sons. Garrett is the oldest and is married to Heather Merriman, from Thatcher. He is a pharmacist with Safeway Pharmacy and Heather is a radiology technologist. Austin, the youngest, is married to Brooke Claridge. He is an electrical engineer with Micron Technologies in Boise, Idaho and Brooke is a civil engineer. Both sons took classes at EAC. “Words cannot express how proud I am of my wife, sons, and their wives,” Rhodes said.

For the past 20 years, each summer, Rhodes put away his art supplies and took out his fire pack and tools to work as a wildland firefighter for the U.S. Forest Service. This was a great opportunity to be outdoors and travel, both of which have always been his passion. “It also gave me a good dose of adrenaline and kept me in good physical condition as I hiked in areas that I am not so certain humans were designed to go,” he said.

“As the years progressed, I found my artistic subject matter evolving to reflect the broader outdoor and travel adventures that characterize my adult life. I often attempt to depict the diverse cultural flavors of the many locations I have enjoyed during my ventures both locally and abroad. The pieces in this show not only represent me as an artist, but also my artistic vision of the world.”

The public is invited to attend the reception March 6, from 5-7 p.m. in the lobby of the EAC Activities Center. Light refreshments will be served and musical entertainment will be provided.

The show will be available for viewing through the entire month of March. For more information contact Rhodes at kenny.rhodes@eac.edu.