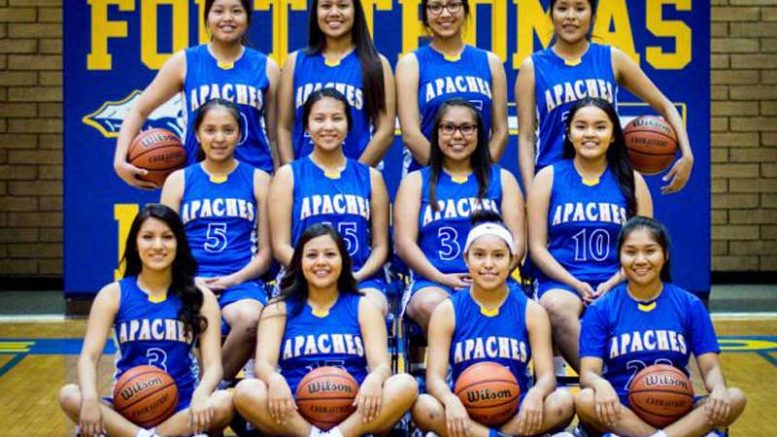 The Fort Thomas Apaches lost a heartbreaker in the semifinals to the St. Michael Cardinals, 42-41.

PRESCOTT VALLEY – The Fort Thomas Apaches had their hearts ripped out of their chests Friday, as they fell to the St. Michael Cardinals, 42-41 on a 3-point basket in the closing seconds of the game.

Fort Thomas lost in the quarterfinals last year and was the state runner-up in 2015.

No. 1 Fort Thomas Apaches (28-2) met the No. 5 St. Michael Cardinals (19-7) beginning a little after 4:30 p.m. at the Prescott Valley Events Center on Friday in the girls 1A state basketball semifinals.

St. Michael won the tip but quickly turned the ball over; the first of three turnovers in the period. Fort Thomas’ Melanie Kitcheyan made the Cardinals pay for the mistake and opened the night’s scoring.

Fort Thomas did most of its scoring in the paint.

St. Michael then went on a 6-0 run for the rest of the quarter on 3-pointers by Ali Upshaw and Taylor Foster, and the first period ended with the Cardinals in the lead, 11-10.

Fort Thomas opened up an 18-14 lead in the second following two buckets from Hinton and Kitcheyan, but the long ball helped St. Michael pull back into the lead, 21-20, as the teams headed into the locker rooms for halftime. Jaylynn Smith led the way for St. Michael with 15 points, followed by 12 points by Ali Upshaw.

Hinton began to assert herself in the third period, scoring 8 points in the period to help Fort Thomas end the quarter with a  33-30 lead. Hinton lead all scorers on the night with 18 points and Kitcheyan had 12.

St. Michael came back in the fourth, however, as Upshaw’s third 3-pointer gave the Cardinals the lead, 37-35. Hinton came right back to tie up the game, 37-37, and, after a free throw by Kiara Goseyun, the Apaches got a big boost from a 3-pointer by Kitcheyan, and went up 41-37 with 2:30 left in the game.

Fort Thomas lost in the waning seconds of the game.

St. Michael got within two points on a couple of free throws by Smith and then Hinton suffered an injury and went to the bench for the rest of the game.

Upshaw then missed a 3-pointer, but the Cardinals gathered the rebound and gave her another shot. This time it was good, and Upshaw’s fourth 3-pointer gave St. Michael a 42-41 lead. Fort Thomas’ last shot attempt at the buzzer bounded off the backboard and fell no good.

St. Michael advances to play the No. 2 Rock Point Cougars on Saturday at 11 a.m. at the Prescott Valley Events Center.

Christianya Begay hit the go-ahead 3-pointer with 3:33 left in the game to put the Cougars in the lead, which they wouldn’t relinquish.

Roan Tsosie scored a game-high 16 points for Rock Point, with Christanya Begay and Ranisha Begay had 8 points each.