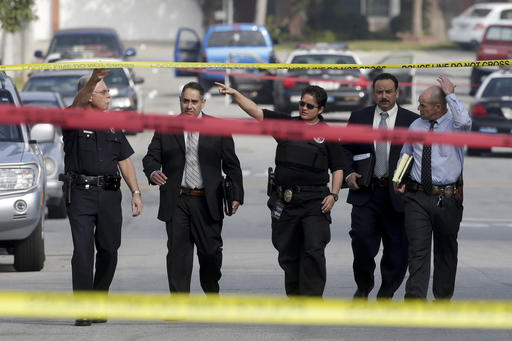 FILE - In this Feb. 7, 2013 file photo, law enforcement members look over the scene of an officer involved shooting in Torrance, Calif. From a body punch that leaves a bruise to a fatal shooting, all 800 police departments in California must begin using a new online tool launched Thursday, Sept, 15, 2016 to help track and report every time they use force that causes injury. The tool’s developers hail it as the first statewide dataset of its kind in the country and a model for other states.(AP Photo/Chris Carlson, File)

LOS ANGELES (AP) — From a broken bone to a fatal shooting, all 800 police departments in California must begin using a new online tool launched Thursday to report and help track every time officers use force that causes serious injuries.

The tool’s developers hail it as the first statewide dataset of its kind in the country and a model for other states. Those more critical of law enforcement call it a big step toward better police accountability.

The tool, named URSUS for the bear on California’s flag, includes fields for the race of those injured and the officers involved, how their interaction began and why force was deemed necessary.

Departments must report the data under a new state law passed last November. Though some departments already tracked such data on their own, many did not.

Working with the California Department of Justice, a technology nonprofit called Bayes Impact developed the tool in hopes of making the data easy for departments to report and easy for the state to analyze.

The tool was built as an open-source project, and California will share the software code with interested law enforcement agencies across the U.S.

Only three other states — Texas, Colorado and Connecticut — now require departments to track similar use-of-force data but their systems aren’t digital, and in Colorado’s case, only capture shootings, according to the National Conference of State Legislatures.

“As a country, we must engage in an honest, transparent, and data-driven conversation about police use of force,” California Attorney General Kamala Harris said in a news release.

The goal is to capture all incidents that cause serious injuries but not minor ones, like bruises.

“How do we get enough information where we can really focus on how to improve or inform policy? How do we make sure it’s not too big?” Erlich said. “Capturing stubbed toes muddies the data but not capturing broken bones would be a huge miss.”

California’s efforts come as the FBI has made such data collection a priority in the wake of a number of officer-involved deaths of unarmed black people across the country.

Last year, the FBI announced it would begin collecting all use-of-force data and make it public, though departments don’t have to participate.

FBI Director James Comey has expressed frustration over the absence of nationwide use-of-force data and said its collection will “dispel misperceptions, foster accountability and promote transparency.”

California’s police departments will report their use-of-force data to the state once a year beginning in January. It will be made public as early as the spring.

Until now, California only tracked deaths in custody, not non-lethal uses of force. And it did so using paper forms.

“This is hugely important,” said Peter Bibring, director of police practices at the American Civil Liberties Union of Southern California. “We’re not taking use of force seriously until we’re tracking information about every use-of-force incident.”

Patrisse Cullors, co-founder of Black Lives Matter, said she thinks the new data will show a pattern of abuse across the state. But actually collecting that data is positive, she said.

“We live in a culture that perpetuates racism and we need to be able to verify that racism through data,” she said. “For the people who continue to deny racial disparities exist in this country, this data will allow us to have those living room and dinner conversations and share facts.”

Many in law enforcement think the data will show just how rare force incidents are, said Louis Dekmar, vice president of the International Association of Chiefs of Police and chief of the LaGrange Police Department in Georgia.

“I see it as something long overdue,” Dekmar said. “When we screw up we should own up to it and do something to fix it.”