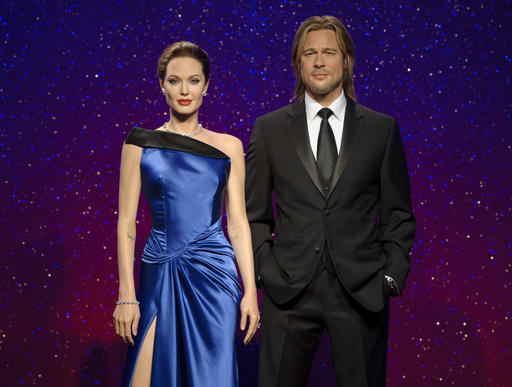 This 2013 photo released by Madame Tussauds shows wax figures resembling married actors Angelina Jolie Pitt, left, and Brad Pitt on display at a Madame Tussauds wax museum. The couple's pending divorce has prompted Madame Tussauds to separate the wax figures of the stars at their museums in London, New York, Las Vegas and Hollywood. The London museum’s head of marketing, Nimali Weerasinghe, says that they wanted to mirror Jolie and Pitt’s separation in the attraction. She says the wax figures “are now featured at a respectful distance from each other.” (Madame Tussauds via AP)

A spokeswoman for the wax museum in London says they wanted to mirror Jolie and Pitt’s separation, which came to light Tuesday. She says the wax figures “are now featured at a respectful distance from each other.”

Jolie’s figure has been placed near one of Nicole Kidman. Pitt’s is hanging out with the figure of his co-star in several films, Morgan Freeman.

The couple will also be split up at Madame Tussauds’ museums in the U.S.

Madame Tussauds says figures of Jolie and Pitt are on display at 15 of its 20 locations across the globe.