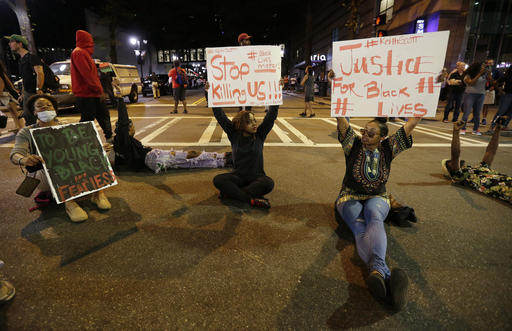 Demonstrators sit on a street during a protest of Tuesday's fatal police shooting of Keith Lamont Scott in Charlotte, N.C. on Wednesday, Sept. 21, 2016. Protesters rushed police in riot gear at a downtown Charlotte hotel and officers have fired tear gas to disperse the crowd. At least one person was injured in the confrontation, though it wasn't immediately clear how. Firefighters rushed in to pull the man to a waiting ambulance. (AP Photo/Chuck Burton)

CHARLOTTE, N.C. (AP) — Charlotte’s police chief said Thursday he plans to show video of an officer shooting a black man to the slain man’s family, but the video won’t be immediately released to the public.

Charlottte-Mecklenburg Police Chief Kerr Putney has said that 43-year-old Keith Lamont Scott refused officers’ repeated commands to drop a gun, but he said during a news conference that the video does not definitely show Scott pointing a gun at anyone.

Putney said he is working to honor the request from the family of Scott to view the video. It’s unclear when or if the video might be released publicly.

“Right now my priority is the people who really are the victims of the shooting,” Putney said. “I’m telling you right now if you think I say we should display a victim’s worst day for consumption, that is not the transparency I’m speaking of.”

The video could be key to resolving the chasm between police, who say Scott refused repeated commands to drop his gun, and residents who say he was unarmed.

Residents say Scott was unarmed, holding only a book, and disabled by a brain injury. But it’s unclear what the body cameras worn by three officers who were present during the shooting may have captured. The plainclothes officer who shot Scott, Brently Vinson, was not wearing a camera. He has been placed on leave, standard procedure in such cases. Vinson is black,

As officials tried to quell the unrest, at least three major businesses were asking their employees to stay home for the day as the city remained on edge. Mayor Jennifer Roberts told ABC’s “Good Morning America” that officials were considering a curfew, and she said in an interview with NPR that the timing of the video’s release depends on how the investigation progresses.

When asked if officials shouldn’t be more transparent, she said: “The transparency would be helpful if the footage is clear and if it covers all the different parts of what happened that evening. Since I haven’t seen it, I’m not certain of that and that may be the case. There were a couple of different body cameras, there was a dash camera, but as you know sometimes those can be not clear.”

North Carolina has a law that takes effect Oct. 1 requiring a judge to approve releasing police video, and Police Chief Kerr Putney said he doesn’t release video when a criminal investigation is ongoing.

The streets were mostly quiet Thursday, but Bank of America, Wells Fargo and Duke Energy all told employees not to venture into North Carolina’s largest city after Gov. Pat McCrory declared a state of emergency Wednesday night and called in the National Guard after the police chief said he needed the help. The North Carolina National Guard arrived at a Charlotte armory early Thursday, and Guard vehicles left the armory about 8 a.m.

Federal help also is on the way, with the Justice Department sending to Charlotte a team of trained peacekeepers designed to help resolve community conflict. The department’s Community Relations Service has been deployed to other cities roiled by tense flare-ups between police and residents.

A peaceful prayer vigil Wednesday night turned into an angry march and then a night of violence after a protester was shot and critically wounded as people charged police in riot gear trying to protect an upscale hotel in Charlotte’s typically vibrant downtown. Police did not shoot the man, city officials said.

Video obtained and verified by The Associated Press, which was recorded right after the shooting, shows someone lying in a pool of blood as people scream and a voice yells for someone to call for help. People are then told to back up from the scene.

The unrest took many by surprise in Charlotte, the banking capital of the South with a population of 830,000 people, about 35 percent of them black. The city managed to pull through a racially charged shooting three years ago without the unrest that erupted in recent years in places such as Baltimore, Milwaukee and Ferguson, Missouri.

In 2013, Charlotte police charged one of their own, Randall Kerrick with voluntary manslaughter within days, after the white officer shot an unarmed black man who had been in a wreck and was looking for help. The jury deadlocked and the charge was dropped last summer. The city saw a few protests but no violence.

On Wednesday, hundreds of protesters who were shouting “black lives matter” and “hands up, don’t shoot” left after police fired flash grenades and tear gas after the shooting. But several groups of a dozen or more protesters stayed behind, attacking people, including reporters, shattering windows to hotels, office buildings and restaurants and setting small fires. The NASCAR Hall of Fame was among the places damaged.

Authorities said three people and four police officers were injured. Videos and pictures on Twitter showed reporters and other people being attacked.

“He got out of his car, he walked back to comply, and all his compliance did was get him murdered,” said Taheshia Williams, whose balcony overlooks the shady parking spot where Scott was Tuesday afternoon. She said he often waited there for his son because a bicycle accident several years ago left him stuttering and susceptible to seizures if he stayed out in the hot sun too long.

Putney, the police chief, was angered by the stories on social media, especially a profanity-laced, hourlong video on Facebook, where a woman identifying herself as Scott’s daughter screamed “My daddy is dead!” at officers at the shooting scene and repeating that he was only holding a book.

Putney was adamant that Scott posed a threat, even if he didn’t point his weapon at officers, and said a gun was found next to the dead man. He also said: “I can tell you we did not find a book.”