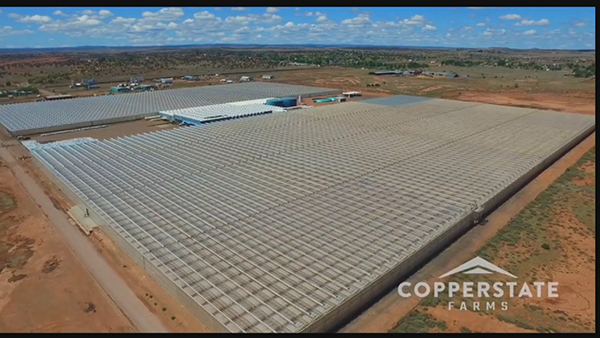 Contributed Photo: Copperstate Farms hopes to begin growing five acres of medical marijuana on this former NatureSweet greenhouse in Snowflake. The greenhouse is 40 acres and growing operations could be expanded in the future.

PHOENIX – The town of Snowflake may have violated state laws in charging $800,000 to allow a marijuana grower to set up shop in the community, Attorney General Mark Brnovich said Tuesday.

In a first-of-its-kind ruling under a new state law, Brnovich said it appears the council essentially pulled the number out of thin air without any legal basis. His decision gives the town 30 days to correct the problem or wind up in court.

Brnovich’s decision, however, may prove to be a hollow victory for Rep. Paul Boyer, R-Phoenix, who had hoped to stop the facility from going in at all.

The council is free to hold a new vote and enact a legally defensible fee. That, in turn, would give voters a chance to circulate petitions to put the question on the ballot.

But at that point the only question would be whether the town gets to collect the tax from the grower. That’s because what Brnovich wrote does not require the town to reconsider the special use permit it already has granted for the 80-acre site where Copperstate Farming intends to grow medical marijuana.

That does not deter attorney Kory Langhofer who represents foes of the facility. He contends that the levy the town council imposed on Copperstate is part of a larger illegal act, making the permit to grow marijuana invalid.

“It was issued in violation of Arizona law,’ he said of the town. “They basically put the license up for sale.’

But Doug Cole, spokesman for Copperstate, said the special use permit is already done and cannot be overturned, no matter the fate of the levy.

He said that Proposition 203, the 2010 voter-approved measure that legalized medical marijuana, limits the ability of local cities and towns to preclude not only dispensaries but also growing facilities as long as they meet other conditions. And Cole said Copperstate complies.

The action by Brnovich comes just a day after Fife Symington IV, son of the former governor and manager of Copperstate Farms, announced his firm had completed acquisition of the existing 40-acre greenhouse that had previously been used to grow tomatoes and cucumbers. Cole said Symington’s father has nothing to do with the new operation. 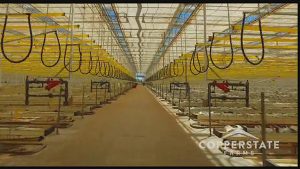 Contributed Photo: Copperstate Farms wants to start growing on five acres in this greenhouse in Snowflake that previously grew tomatoes and cucumbers.

He said plans are to start with five acres of marijuana planted by the end of the year.

Whether that happens may need to be resolved not by Brnovich but by a Navajo County Superior Court judge who is hearing a lawsuit brought by Langhofer to block what he called “the world’s largest marijuana growing facility,’ a facility he said is out of character for the tiny rural White Mountains community.

The ruling by Brnovich is the first under a new state statute that allows any legislator to ask the attorney general to determine if a community is violating any state law. If the attorney general agrees, the city or town has 30 days to fix the problem or face the loss of its state shared revenues, money that can make up half a community’s operating budget.

Boyer charged Snowflake officials violated the Open Meeting Law in discussing the deal with Copperstate Farms and failing to provide adequate notice of public hearings. Brnovich sidestepped those issues, saying that does not fall under the new state law allowing him to investigate.

But Brnovich did take a look at Boyer’s contention that the town effectively entered into an illegal deal to give Copperstate the permit in exchange for the $800,000.

Brnovich said the evidence shows the town had no set fee structure — and nothing based on any costs of the facility to taxpayers — but essentially negotiated a fee with Copperstate. That, he said, appears improper.

“This ad hoc imposition provides no indication what license fee would apply to a future landowner who wishes to cultivate medical marijuana,’ Brnovicch wrote, with each future applicant having to negotiate “a unique tax or fee burden with the town.’

Brnovich said, though, all this could be fixed if Snowflake established “a single, uniformly applicable business-license-fee payment schedule for medical marijuana cultivation.’

None of that, however, deals with the special use permit already issue.

“That’s unfortunate,’ said Boyer, a foe of all forms of legal marijuana, saying he’s seeking legal advice on what options remain to stop marijuana from being grown at the site.

Cole said the grow facility will happen, whether or not Snowflake amends its fees.

He said Eurofresh built the first 20 acres under glass in 1998 to grow greenhouse tomatoes, doubling the size in 2004. When that company went bankrupt the operation was sold to NatureSweet which sold it to Copperstate.

Cole said there is no reason for the town to reject the permit to grow marijuana given that the facility is already there, located in an industrial park.

Langhofer is in an interesting position on the issue.

While trying to kill the Snowflake facility he also is the attorney representing backers of Proposition 205 which would expand the medical marijuana law to allow all adults to use the drug for recreational purposes. But Langhofer said the legal questions over the Snowflake site will remain whether or not voters approve that in November.