GRAHAM COUNTY – A mother’s concern likely changed to a different type of worry after she learned her son she reported as possibly being missing on Mount Graham was actually in jail. 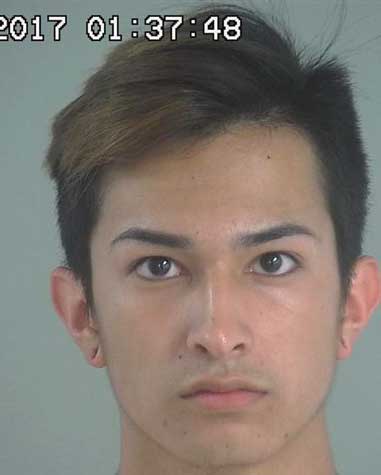 Contributed Photo/Courtesy GCSO: Billy Perez was reported missing by his mother but was actually in jail on charges of DUI-drug, possession of marijuana and possession of drug paraphernalia.

Billy Josiah Perez, 18, was reported missing by his mother, who said her last communication with him was by a Snapchat picture he posted showing him driving up Mount Graham on May 28. After he failed to show up at the bus for his senior trip to Disneyland, however, she became afraid he could be lost on the mountain. She informed Graham County Dispatch that she believed he had traveled up the mountain with two friends. While it was the middle of the night, the mother said she and her husband were headed up Mount Graham to look for their missing son.

After receiving notice of the missing person, a Sheriff’s deputy ran Perez’s name though his computer and saw he was confined in the jail. The deputy then called Perez’s mother and informed her of his whereabouts.

The three teenaged adults were all released on their own recognizance the following day. But by taking a trip up to the mountain to commune with nature through some magical fruit of the cannabis plant, Perez missed his chance to visit the Magic Kingdom and instead is looking at spending some time on probation.