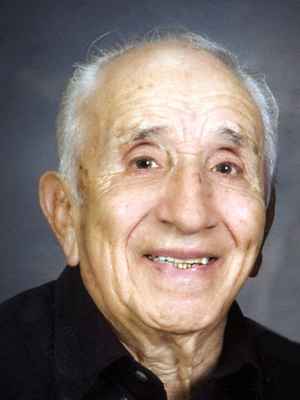 Ramon Madrid, Sr., or “Monchie” as he was affectionately known, entered into rest early Sunday morning, September 11, 2016. He was 89.

Ramon was born August 21, 1927, in Duncan, to Petra Madrid. He grew up in Duncan where he attended school. Ramon worked for the Phelps Dodge Mining Corporation for 42 years. He retired in 1992, and moved to Thatcher in 1993.

Monchie enjoyed boxing at a very young age and competed against other boxers. He loved dancing. Every dance that Ramon and his wife, Mary, would attend others would stop just to watch them dance. He also enjoyed hunting and most of all, his grandchildren.

Ramon was welcomed into Heaven by: his loving wife, Mary Louise Madrid; and his loving son, Ramon “Jap” Madrid, Jr.

A Mass of Christian Burial for Ramon will be celebrated Saturday, September 17, 2016, at 12:00 p.m. (noon), at St. Rose of Lima Catholic Church by Rev. Robert Rodriguez.

Online condolences may be offered at viningfuneralhome.com Arrangements are entrusted to Vining Funeral Home.