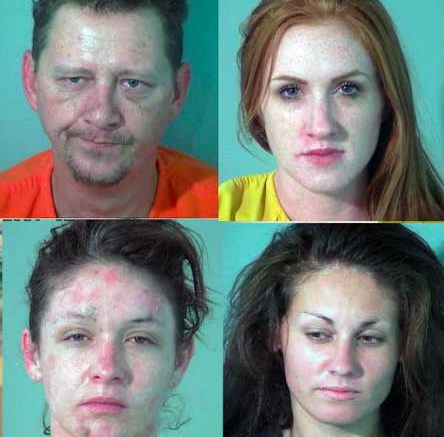 Contributed Photo/Courtesy GCSO: They came for one and left with four. Police went to a residence to arrest one woman with a warrant and ended up arrested four people with warrants.

SAFFORD – Like cockroaches who scramble for hiding places when one turns on a light in a dusty garage, a group of people in the throes of drug addiction ran for cover when the light of the law shone on them, but there was no escape from justice.

A trip to apprehend one individual ended with four people with warrants taken into custody, Thursday, and a fifth person was given a citation for possession of drug paraphernalia and released.

Contributed Photo/Courtesy GCSO: Eugene Wood, left, and Heather Hancock-Adams were taken into custody for their warrants.

The situation went down in the 400 block of S. 7th Avenue after a Graham County Probation officer informed police that Heather Hailee Hancock-Adams, 21, of Safford, was either in a car in front of a residence there or in the residence itself. Hancock-Adams was wanted on a warrant out of Safford Justice Court for failing to pay fines regarding driving on a  suspended license.

Upon arrival, an officer knocked on the door of the residence and as the occupant opened the door people went running to hide or flee.

Officers then headed to the back of the residence and caught Stevie Nichole Sarrett, 29, of Duncan, trying to make it over a fence. Sarrett was found to have four warrants on four separate cases for shoplifting, possession of drug paraphernalia, possession of a narcotic drug and aggravated DUI. She was taken into custody and booked into the Graham County Jail on her warrants.

Officers then went back to the house and the occupant, Michelle Suzzette Wakefield, 43, allowed them to search the house for the other people who ran and hid. During the search, an officer located a glass pipe with apparent methamphetamine residue and multiple syringes. Wakefield allegedly said the pipe was her husband’s and that she preferred to inject meth. She was given a citation for possession of drug paraphernalia and released.

Contributed Photo/Courtesy GCSO: Stevie Sarrett, left, and Page Gillespie were taken into custody for their warrants.

Hancock-Adams was then located hiding in a bathroom and officers also found drug paraphernalia in her possession consisting of a piece of aluminum foil with apparent drug residue. She was taken into custody and booked in on her warrant.

Eugene Curtis Wood, 37, of Thatcher, was located hiding in a shower. Wood also had warrants for burglary, theft of a credit card, fraudulent use of a credit card and theft and was taken into custody and booked into the jail. A piece of aluminum foil with apparent drug residue and a cut straw were found in Wood’s pocket. He allegedly admitted the items were used to smoke heroin and the officer requested additional charges of possession of drug paraphernalia be levied against Wood by the Graham County Attorney’s Office.

A fourth person with warrants, Page Blanche Gillespie, 27, of Duncan, was found hiding in a closet. She was booked on her warrants for shoplifting and possession of drug paraphernalia.