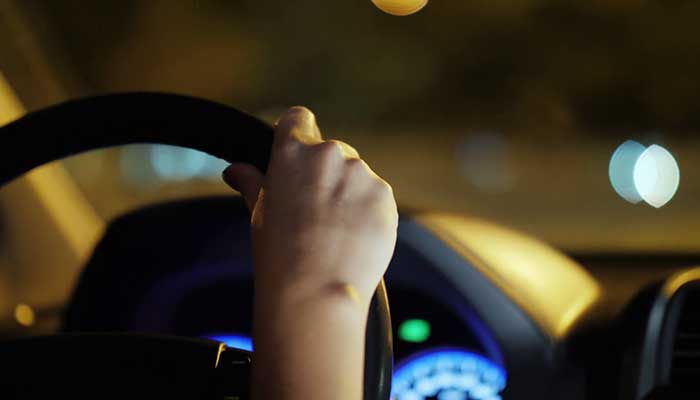 The deputy turned right onto 20th Avenue behind the van and turned on his emergency lights. The van did not yield or pull over. The deputy advised dispatch that he was following a vehicle that was failing to yield. The deputy then activated his siren but the van still did not pull over. At that point, the van was traveling 40 miles per hour and was not driving recklessly.

The van continued to Golf Course Road and made an abrupt turn while traveling at approximately 45 MPH. While making the turn the vehicle leaned hard to the left side. After making the turn the van veered off to the right shoulder of the road and almost went off the roadway. The deputy clocked the van’s speed at nearly 55 MPH. The van was swerving between both lanes of traffic as it continued to try to evade the deputy. Fortunately, there was not any other traffic on the road at that time of night.

As the van approached the intersection of Golf Course Road and 1st Avenue, it’s left blinker was turned on. The van then made another abrupt right hand turn onto northbound 1st Avenue. As the van made the turn at a high rate of speed it came within several inches of hitting some metal reflective poles. The van over-corrected and swerved into the oncoming lane of traffic, then swerved back into the northbound lane and almost wrecked. The driver of the van regained control and accelerated to approximately 70 MPH in a posted 35 MPH zone. The van was driving close to the right should and almost off of the roadway.

Up ahead, the deputy noticed the tail lights of a vehicle that had pulled over – probably because the driver saw the emergency lights coming behind them. The driver of that vehicle must have anticipated a problem as the vehicle the deputy was chasing approached, and moved their vehicle to the other side of the road before the van and deputy reached their location.

As the van approached the intersection of 1st Avenue and 8th Street, it slowed and put it’s right blinker on. Then it attempted an abrupt left turn onto westbound 8th Street, while traveling approximately 45 MPH. The van was traveling too fast to make the turn and crashed into a fence at the intersection. The deputy got out of his vehicle with his duty weapon drawn and ordered the driver of the van to show their hands. The window of the van was rolled up and the deputy could not see anything inside the vehicle.

A Thatcher police officer arrived and from his angle of view, could see that the driver of the van was having what appeared to be a seizure, and was not responding. The Thatcher officer opened the driver’s door and cut off the seat belt the driver was wearing. The driver was pulled out of the vehicle and placed on the ground. At that point, authorities realized that the driver was a juvenile. When the seizures stopped the boy was placed in handcuffs. An ambulance arrived, checked the boy out, and found him to be okay.

Once the boy was identified, a deputy went to his home and woke his parents to notify them about the incident. When the parents arrived at the scene, the mother said that the boy did not have permission to drive the vehicle and had taken it without their knowledge. They agreed to be victims of a stolen vehicle.

The boy told authorities that when he approached the intersection where the deputy first saw him, he just wasn’t paying attention and stopped at the green light. When he realized the light was green he continued through the intersection. He said that he didn’t stop for the deputy because he didn’t want to get caught, so he tried to “juke him out.” The deputy asked him that meant and the boy said that he turned on his blinker to pretend like he was going to go one way, then actually turned the other way. The deputy asked him why he had been swerving so much and the boy said that it was because he didn’t know how to drive.

The juvenile said that his parents wouldn’t teach him how to drive, so he decided to take the van while they were sleeping and practice by himself at night. The deputy asked the boy if he had been drinking and the boy said, “no.” A breath test registered 0.00.

The deputy contacted juvenile probation about the incident. They asked the deputy to prepare paperwork and release the boy to his parents.

A vaping device was found on the driver’s side floor board of the van. The boy admitted that it was his. He said that his mother had taken it from him but he took it back.

In addition to the damage to the fence, a fire hydrant was ripped out of the ground and was laying approximately 10 feet from its original location. The windshield and front passenger window were damaged and the air bags had deployed. City of Thatcher workers arrived to fix the fire hydrant. The juvenile’s parent pulled the van out of the fence and were allowed to take the vehicle.

The juvenile is facing charges of Theft of Means of Transportation, Unlawful Flight from a Pursuing Law Enforcement Vehicle, Reckless Driving, Criminal Damage and a Minor in Possession of Tobacco.