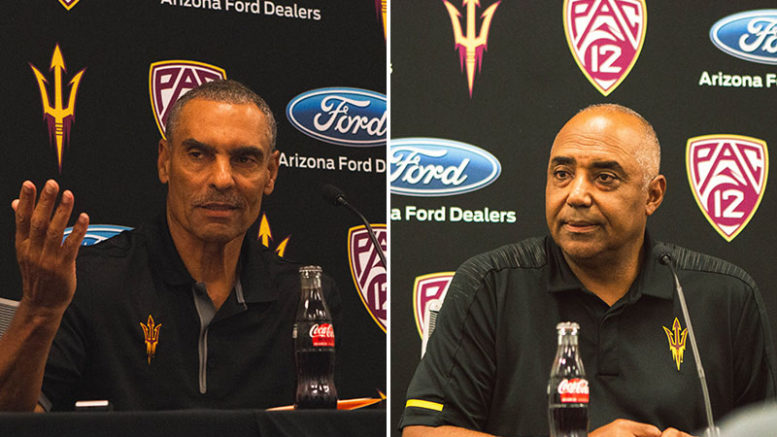 TEMPE – Marvin Lewis had options. Rejoining his old friend Herm Edwards felt like the best one.

With Arizona State’s opener just weeks away, Lewis, the longtime Bengals coach, said joining the ASU staff in the offseason had a lot to do with the goals he shared with Edwards.

“I had a few opportunities, but I thought this worked the best with my relationship with Herman and his vision,” Lewis said. “It was important for me to come over and talk with what his vision was and then come back and speak with coaches. I wanted them to feel comfortable that I wasn’t here looking over their shoulder all the time.”

Lewis joined the Sun Devils coaching staff as a special adviser on May 28th after parting ways with the Cincinnati Bengals on Dec. 31 after 16 years as the head coach. He has been around the NFL since 1992 when he was linebackers coach for the Pittsburgh Steelers and has known Edwards for nearly three decades.

As a special adviser, he will not be able to coach any of the athletes directly but can assist with opponent scouting, team analysis and recruit evaluation.

When he offered Lewis the job, Edwards said, he told him he could make his own hours.

“He walks into the building at a quarter to seven,” Edwards said, “He told me, ‘Herm, I’m not getting up with you.’

“ ‘I don’t expect you to be here at 4:15, you don’t need to do that.’ That’s Marvin and you know what, he’s all in, man, he’s all into this and he’s excited about this. It’s just interesting because I know the guy and he’s all in.”

Edwards is excited to see what Lewis can bring.

The relationship that Lewis and Edwards share with Ray Anderson, vice president for university athletics and a former agent, dates back three decades when the coaches both worked in the NFL.
“Well it goes back 30 something years, it’s kind of ironic,” Edwards said. “Ray walked into my office today and he said … his wife Buffy found this old picture and it was me, Ray and Marvin, when Marvin was in Baltimore before he became the head coach of the Cincinnati Bengals.

“She had this picture we had taken because he was our agent and we were just laughing ‘cause the three amigos, and we go way back and I go further back with that with Marvin.”

Edwards has known Lewis since 1990 when he was a scout for the Kansas City Chiefs and Lewis was the linebackers coach for the University of Pittsburgh.

“When coach (Edwards) called me and said Marvin was going to come around I was ecstatic,” Gonzales said. “I love the history of the game of football and to be around those two guys and be able to pick their brains and get ideas, I think I’ve worn Coach Lewis out.”

Gonzales said that he has admired Lewis since Lewis coached at New Mexico and Gonzales was in high school in Albuquerque.

Lewis hopes his experience can help the ASU program make a smooth transition to Edwards’ second season as a college head coach.

“Those are the things Herm Edwards has impressed upon the coaches to now in Year Two,” Lewis said. “Lets get more detailed about these things, the small things, the details of our responsibilities and work that will make a difference in how we close the gap and win those one-score games and make a difference in the season from what happened a year ago. Those are things that we are pressing hard on.”