SAFFORD – Library patrons burned some calories and learned about water conservation Wednesday as they worked up a sweat to some good tunes.

John Dark was first to greet patrons at the Safford City-Graham County Library on Wednesday and gave brief presentations on the city’s AquaHawk alert program.

“It (AquaHawk) will notify you if it notices abnormal water usage at your place of residence,” Dark said.

Working with the city for roughly two years, Dark said AquaHawk is not only good for early leak detection but also for water conservation and money savings. The program can also monitor individuals’ water bills.

“The program actually does so much more than leak detection,” Dark said. “You can monitor your bill; you can set thresholds for when you want to be notified. You can sign up online and at the City Hall Utility Office. We actually assist along the way when people get signed up. either in person or on the phone.” 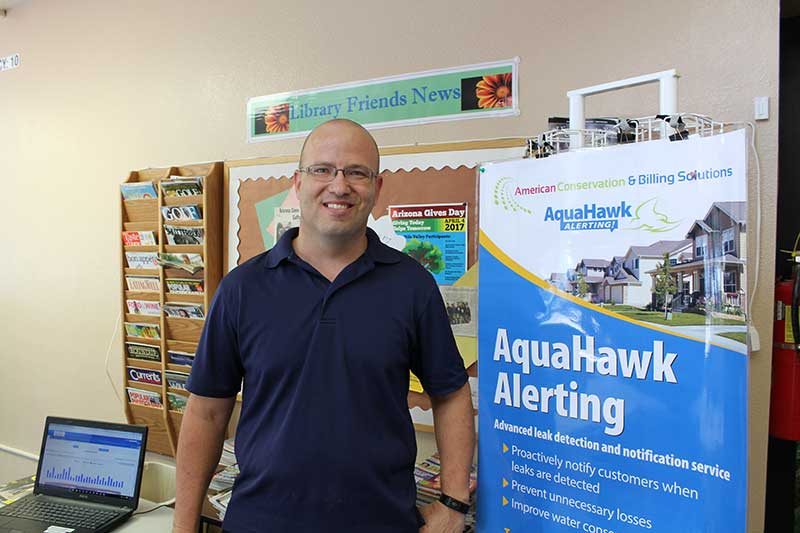 While Dark was giving presentations in the foyer, Maria Kouts was teaching a free Zumba class in the back room. Zumba is an exercise program that features dance movements that coincide with music. With more than two dozen students, Kouts’s class consisted of all ages.

“At the beginning, it was all little kids,” Kouts said. “Very quickly we got teens, (and) the youth probation, so real quickly I decided ‘alright, I’m just going to walk them through all the steps of the song and we’re going to do the songs’ and they all did great. It was amazing.”

Kouts has been practicing the practicing Zumba since 2008, and this was her second time teaching a class at the library. Kouts said Zumba is a fairly easy exercise to manipulate to match the abilities and age of the class.

“It’s one of those things that (is) for everybody,” Kouts said. “From the littlest child to the adult, everybody can get it. It takes a little bit of time, but once you get it, you get it. We have two rules in Zumba. The number one rule is that you have gotta have fun. The number two rule is that there’s absolutely no judgment, none.”(sic)

Suzanne Ortega took the Zumba class with her daughter. She told Gila Valley Central that she appreciated the library and that it was her family’s place to hang out during the hot days of summer.

“They have just brought so much to the community,” Ortega said. “We’ve been here a lot this summer. They’ve had a lot of programs. They’ve had art programs and things for the kids. It’s kind of our spot to be cool when it’s so hot out and (they) have enriching activities. I really appreciate all that the library does for the community.”

Although summer is almost over, the Safford City Graham-County library has a magic show coming up, and a summer building block party, Thursday at 4 p.m.

For more on AquaHawk visit https://saffaz.aquahawk.us/login.