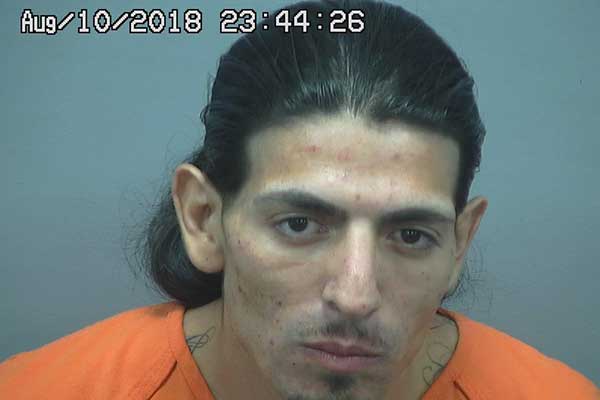 SAFFORD – Officers were dispatched to the Safford Cemetery on Friday night around 8:30 when a woman found a man passed out near a grave site and not moving. When authorities arrived, the woman showed them where the man was laying but he was no longer there. In the area, however, there was a parked vehicle in an isolated aisle of the cemetery and the woman reported seeing the man near the vehicle.

When the officer approached the vehicle, two males could be seen in the driver and passenger seat. Both appeared unconscious and did not wake up when the police officer shined a light into the compartment of the vehicle. The officer did notice a small plastic baggie in the center console. Both men appeared to be breathing and would adjust their bodies in their seats but would not fully awake even when the officer made a light amount of noise around the vehicle or when shining the flashlight in their eyes. The officer felt it was fairly early and uncommon for people to be sleeping  in the cemetery.

As another officer arrived, they approached the passenger and driver side of the vehicle. They knocked on the window of the vehicle and shined their lights into the vehicle as they announced who they were. The two males then gained consciousness. The driver was asked to exit the vehicle, but had to do so through the passenger door. The driver was identified as Andrew Herrera. When he was asked if he had anything illegal, Herrera stated he did not. An officer observed several objects in Herrera’s pockets as well as the heavy amount of scarring on his forearms. For the officer’s safety, a pat frisk for weapons on Herrera was conducted. The officer could feel an object that they knew to be a syringe. While placing Herrera in handcuffs, he attempted to pull away from the officers grip but was unsuccessful and was secured into handcuffs. When the officer removed the hypodermic needle from Herrera’s pocket, Herrera stated he is diabetic but he was unable to provide a prescription for insulin and when asked where he injects insulin, he did not respond. The passenger was identified and also showed heavy scarring and track mars to his arms also. Police were notified through dispatch of an arrest warrant for Herrera.

A search of the vehicle revealed another hypodermic needle in the passenger side door, in the center console near a plastic baggie was a spoon with dark residue, used cotton balls with burn marks. On the driver side door panel there was a small plastic container which contained a green leafy substance recognized as marijuana. Herrera stated he did not have a medical marijuana card and was secured in the officer’s patrol car. Herrera later admitted to recently being released from prison after serving a 7 year sentence, and relapsing to heroin usage.

The passenger was released from the scene. Herrera was booked in the county jail for his active warrant.