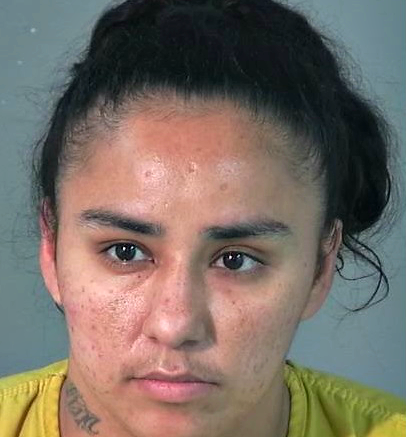 Contributed Photo/Courtesy GCSO: Alma Sanchez was booked into jail for drug charges after being stopped for incorrectly halting at a stop sign.

SAFFORD – A moving violation led to the seizure of 60 grams of methamphetamine Tuesday  that was likely destined for the Gila Valley. The drugs were valued at $6,000 on the street.

Alma Sanchez, 29, was found traveling with meth in her car when she was stopped for not halting properly at a stop sign.

After Sanchez was stopped for her traffic violation, a Safford Police officer conducted a records check and learned Sanchez was a Mexican citizen without a green card or passport. Officers asked if she would consent to a search of her person and found white narcotic prescription pills. Sanchez said the pills were medication for a traveling companion.

Safford officers informed Sanchez that she was not supposed to have someone else’s prescription drugs, and she said that they belonged to one of the men who had been in the car with her. Sanchez then told Safford officers that she had been traveling with two men who had been romantically involved with each other. After picking up one of the men in Chandler, they all drove to Safford. Once they reached Safford, the men had a relationship dispute, and Sanchez was left alone in the car, according to her statement to police.

During a search of the vehicle, officers found a black bag with two large plastic bags filled with meth. Sanchez denied owning the black bag, and said it belonged to one of the men who had been in the car. She also refused to name her traveling companions.

Sanchez was then booked into the Graham County Jail for transportation of a dangerous drug for sale, possession of narcotic drug and possession of drug paraphernalia.