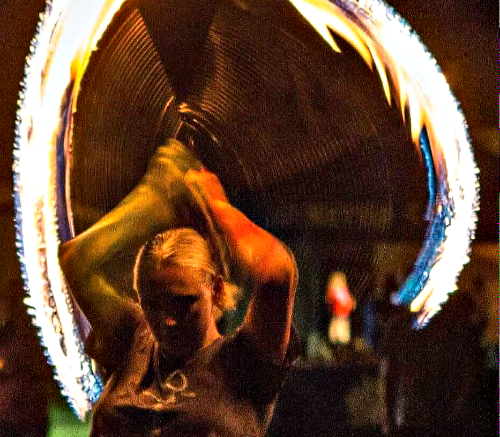 THATCHER – A performing art generally associated with a stage show during Hawaiian luaus can also be found here in the Gila Valley.

Thatcher High School student Emily East practices poi and performs for local events. Now 17, East first began practicing poi when she was 11 under the tutelage of her father, Sam East. The last major event she performed in was the Relay for Life.

“I may be the best poi swinger in the Gila Valley,” Emily said. “My dad is OK at it too.”

Poi is a performing art involving swinging tethered weights. The weights are swung by the performer through a variety of patterns and rhythms, and artists may also sing or dance while swinging the poi. Weights can switch into different sizes and shapes and even be set on fire.

“Three of my cousins can swing fire,” Emily said. “How you feel about the fire is all in a frame of mind. I used to be scared of it, which made it hard to try anything new. But once I got over that fear, the whole thing just came naturally. It’s really warm, and for someone with asthma, it could be a little hard to breathe.”

Originating from the Maori culture in New Zealand, poi has become a universal art. Styles vary depending on the individual and where they received their training. However, two strong poi types are prevalent: traditional poi and modern poi. Traditional poi is usually choreographed with other dancers, while modern poi is usually performed by individuals with less dancing and music.

“Someone offered to help me make a website to promote poi,” Emily said. “I was thinking about teaching some friends how to swing and perform other places with a group.”

Emily East said the best part of poi is the extreme sensation of performing for a crowd. She said her best performance was at the Relay for Life in Globe earlier this year, where she was able to try new things and have the greatest amount of fun possible with the art.

“You’ll never accomplish anything if you tell yourself that you can’t do it,” Emily said.