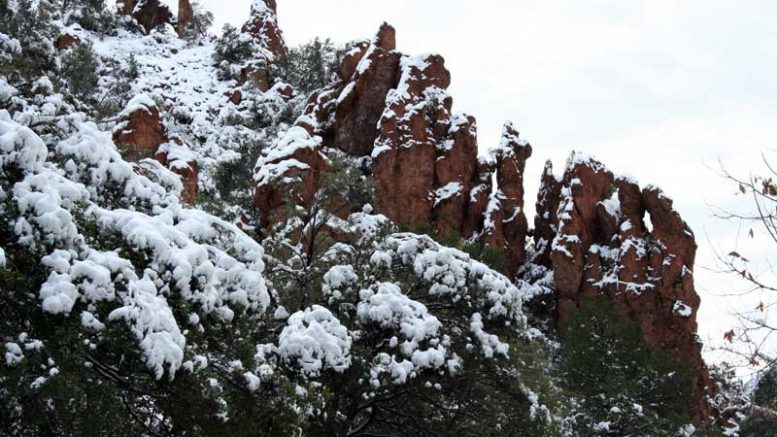 Photo By Walt Mares: Winter storm Kori left its mark in Greenlee County over the weekend.

It was not cold on the Coronado Trail above Morenci this past Saturday, Jan. 21. Neither was it bitterly cold. Rather, it felt brutally cold as the wind lashed through the snow-covered mountains along the giant open pit copper mine above Morenci and further up the Trail.

The snow and wind were results from winter storm Kori that hit California and blew its way east to Arizona, New Mexico and Colorado. The storm abated by Saturday night and on Sunday it left a picturesque view of the snow-capped mountains surrounding Greenlee County’s three largest communities of Duncan, Clifton and Morenci. 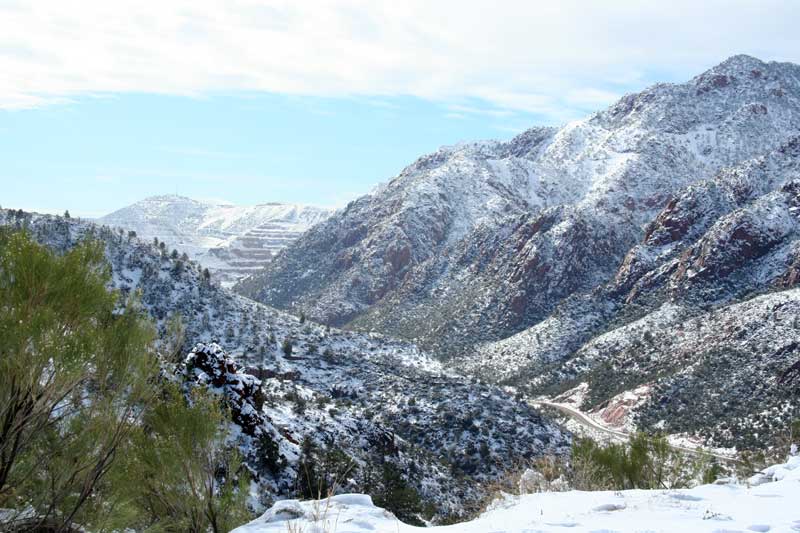 Photo By Walt Mares: The view from the pullout on the curve beginning the climb to Cherry Lodge was breathtaking.

On Saturday, a gilavalleycentral.net reporter/photographer drove the Trail (U.S. Highway 191) for about 22 miles, from Clifton to a few miles above the Apache Forest boundary, which is bordered by the Freeport McMoRan Morenci Mine. 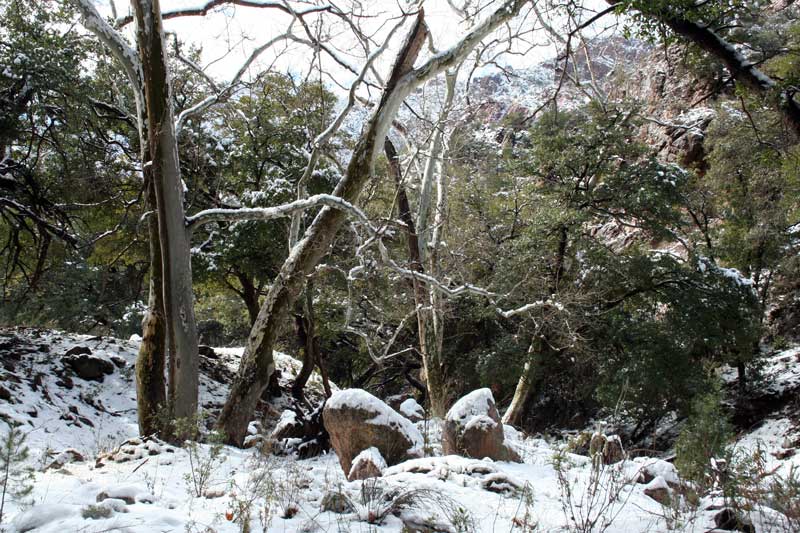 Photo By Walt Mares: Snow that fell Friday and Saturday on the Coronado Trail above Clifton and Morenci made for beautiful sights when the sun shined Sunday. This scene is close to the Apache Forest boundary that abuts the Freeport McMoran giant Morenci open pit copper mine.

Upon the trip up the Trail, the wind began blowing hard around the former site of Stargo, from which the site of long gone Old Morenci is visible. Most of that town and Stargo began being hauled away in the early 1980s as the mine, then owned by Phelps Dodge, was expanded.

The wind blew harder at the mine’s scenic view area, about seven miles above Morenci. Prior to reaching the overview site, the reporter stopped to take some photos. The wind blew off his hat and fortunately for him, it was caught by a chain link fence. Otherwise it would probably would have ended up somewhere in the mine. He decided after that not to wear the hat whenever he stopped to take photos. 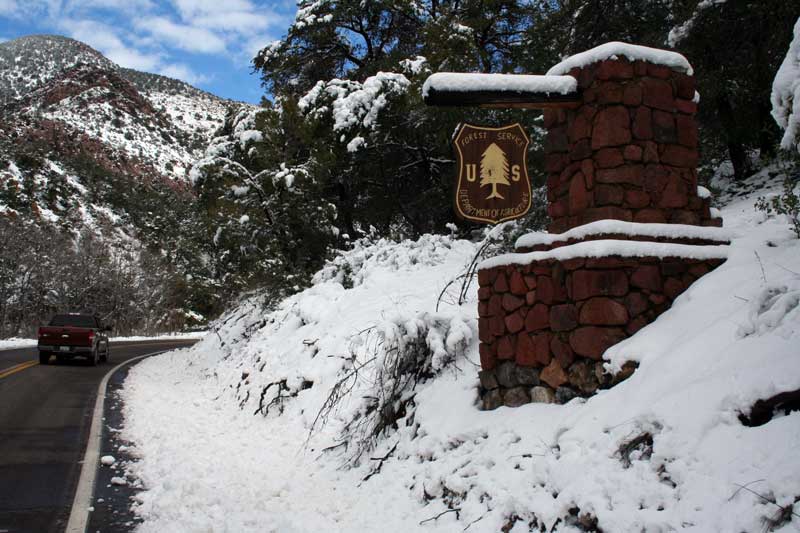 Photo By Walt Mares: Snow adds a welcome note for snow lovers on the sign designating the Apache Forest boundary on the Coronado Trail above Morenci and Clifton on Sunday, Jan. 22. Snow fell Friday night and Saturday. The storm included a harsh wind on Saturday, but the sky was clear Sunday.

As he sat in his vehicle and warmed himself, the reporter recalled a saying he learned long ago as a cub reporter: “It’s colder than a publisher’s heart out there.”

It was a wise decision to go hatless when he pulled into the scenic overlook. There was some snow on the ground, but not much as evidenced by mud and a miniature snowman someone built on top of a large rock. Two young men in a passenger car pulled in. They wore hooded sweatshirts and bent forward as they were buffeted by the wind. One of them took a cell phone photo of the other standing by a huge haul truck tire that was placed at the spot. The tire dwarfed the man. After a few pictures were snapped they did not linger and rushed back to their car. 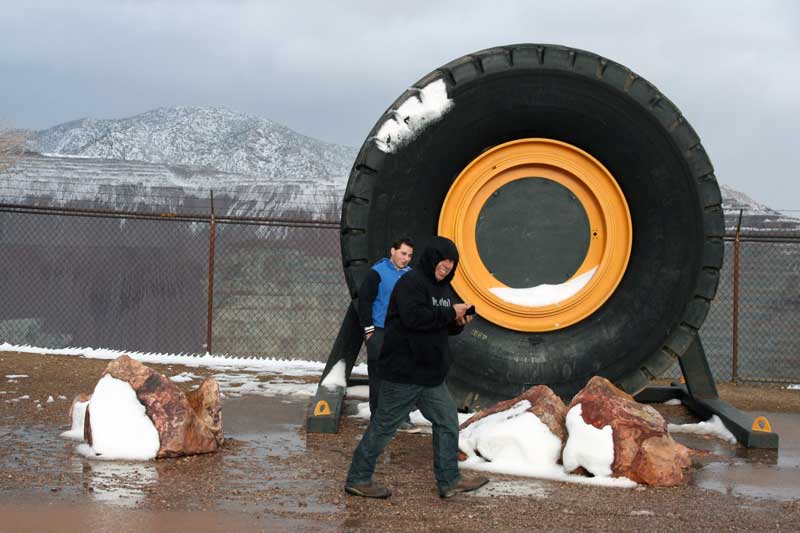 Photo By Walt Mares: Two men are dwarfed by a haul truck tire at the Morenci open pit copper mine overlook on the Coronado Trail above Morenci. One of the fellows took a photo of his partner standing next to the tire. They then rushed to their vehicle to get out of the wind. Combined with the snow, the hard wind made it brutally cold.

Further up the road was an empty guard shack at a road crossing used by heavy equipment. At times a mine employee will man the shack and stop regular vehicle traffic to allow one of the mine’s giant haul trucks or other heavy equipment to cross the highway. The crossing is evidenced by the lack of pavement. On Saturday, the crossing was muddy and there were several water-filled large potholes, which caused cars and pickup trucks coming down or going up the Trail to slow down to a crawl. Those that did not decrease their speed sufficiently ended up becoming mud splattered.

The reporter continued to the forest boundary and further to a sharp curve at which the road begins climbing steeply toward Cherry Lodge, also known as the Granville Campground. He opted to stop at the curve and turned around to head back down the Trail. For one thing, a thick cloud cover was so dark it made it difficult to shoot the kind of photos he was seeking. Visibility was about a mile or less. Weather reports said the storm would clear the area by Sunday. 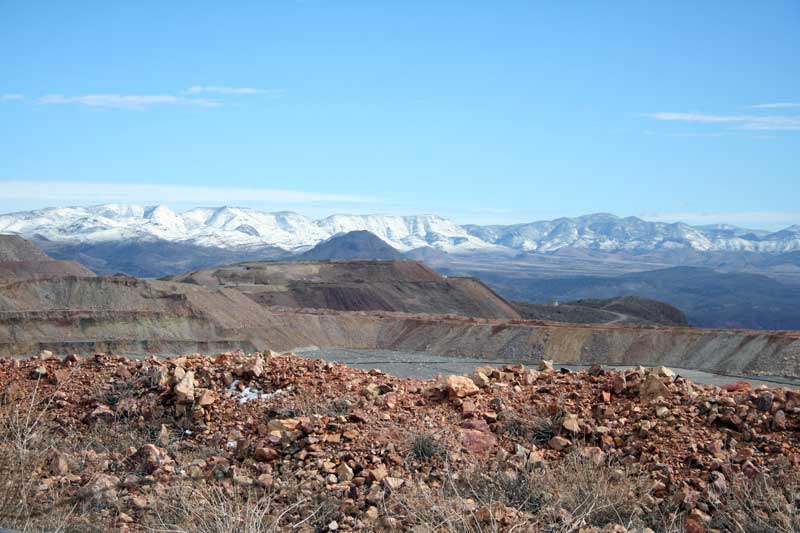 Photo By Walt Mares: Snow-capped mountains along the Mule Creek Pass area can be clearly seen on Sunday, Jan. 22, from a spot on the Coronado Trail as it passes through the Morenci open pit copper mine. On Saturday, storm clouds obscured the view and visibility was perhaps a mile at most.

Sure enough, on Sunday the sun was shining and there were not any storm clouds overhead. The reporter and a companion traveled back up the Trail. Visibility was clear for miles, including the Mule Creek mountains, the peaks around Clifton and those in the Lower Eagle Creek area. All were beautifully snow-capped. 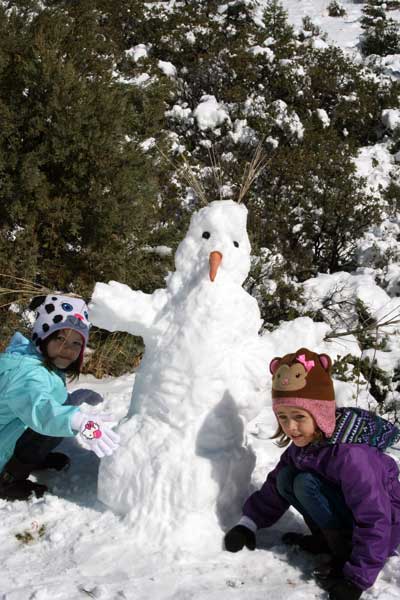 Photo By Walt Mares: The Albinovich sisters, from left, Celine, 4, and Elina, 5, of Morenci, build a snowman at a pullout area on the Coroando Trail above Morenci on Jan. 22. Dad, Senad Albinovach, watched and encouraged the girls from a few feet away. Sunday was sunny and bright, which was a welcome respite from Saturday’s harsh wind and cold weather.

This time the reporter did not turn around at the curve to Cherry Lodge. He traveled  a bit further up to a pullout spot located before the steep climb. There was plenty of snow, enough to make a snowman, which was being done by two small girls as their dad watched. They were the Albinovich family. Elina, 5, and Celine, 4, focused on the snowman while dad, Senad, observed. He smiled all the while as his girls, wearing thick coats and gloves, worked away.

The snowman was about four feet tall. Someone, probably dad, had thought to bring a carrot to place on the snowman’s face, thus giving him a quite sharp and colorful nose. After accomplishing the task, which no doubt was fun as it was the girls’ first experience with snow, the Albinoviches prepared to leave.

As they neared their car, the carrot fell off of the snowman’s face. The family saw it but left things well enough alone. After all, someone else would probably come along and replace the nose and perhaps make the snowman even bigger.

Senad is an FMI employee. He has been in the U.S. for five years and is originally from Yugoslavia. That means he has had plenty of experience with snow and how to have fun in it. He said he loves living in Greenlee County with its wide open spaces and mountains.  A haul truck driver at the Morenci mine, Albinovich said he also enjoys his work.

Asked if his daughters are bilingual, he said the girls are primarily learning English,, which will benefit them most. Besides, both girls are American-born citizens.

The journey for the reporter and his partner ended in Morenci at the Copper Canyon Café, where they enjoyed lunch and, most of all, hot tea and coffee. They spoke about how snow up the trail had begun to melt. In their conversation, the partner commented, “It’s experiences like today’s that make me grateful to live in Greenlee.” 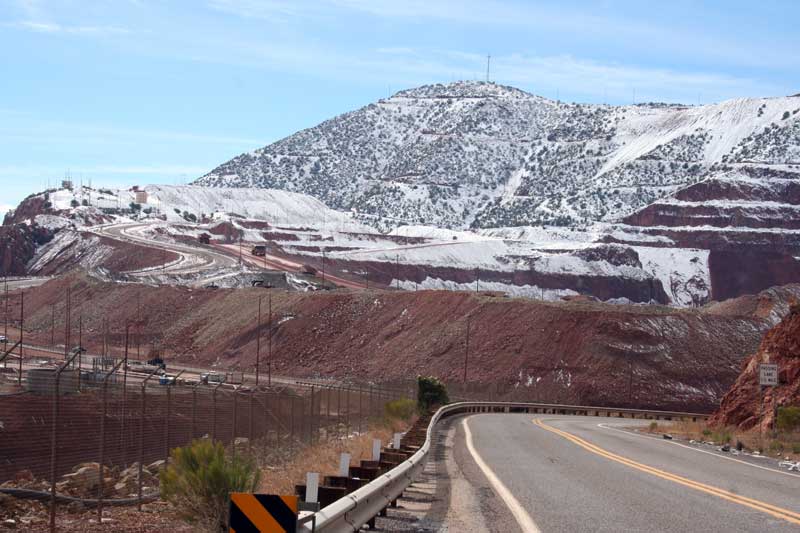 Photo By Walt Mares: This view of part of the giant Morenci open pit copper mine also shows a stretch of the Coronado Trail that winds its way through the mine. The photo was taken Sunday, Jan. 22. On Saturday, clouds and snow obstructed visibility at this same site.

Time for Toys for Tots