SAFFORD – It’s new, it’s caffeinated and it has cookies. At its soft opening Monday, the new Sodalicious soda shop in Safford was packed.

Sodalicious is a new soda shop located at 1904 W. Thatcher Blvd. in the Mt. Graham Shopping Center. The shop sells a variety of treats, including those made from Rice Krispies, and cookies along with specialty sodas with numerous flavor offerings. Its soft opening started Monday, and the shop’s front door was literally thrown open so more people could fit into the small building.

Kevin Wright, one of the owners of the Sodalicious shop, told Gila Valley Central that Monday’s soft opening was one of the biggest soft openings the small chain had ever experienced.

“This is the busiest soft opening ever,” Wright said. “We probably sold three hundred tickets, and that’s an average four drinks a ticket, so that’s about 1,2000 drinks so far today.”

Brooke Curley Photo/Gila Valley Central: Thought up by one of the employees, this tipping poll encourages visitors to leave a tip in friendly voting competition.

Wright said he chose to locate the store at the Mt. Graham Shopping Center because of its central location.

“I found the location by accident, and I saw it was being remodeled,” he said. “This is the busiest intersection in town, and with our ability to put a drive-through in the back, it made perfect sense to us.”

Sodalicious is a small chain of soda shops based out of Provo, Utah. The first Sodalicious store opened its doors in October, 2013. The Safford Sodalicious store is number 14 in the nation and the fifth store located in Arizona. The name was created by a child, and the store owners ran with the obvious yet adorable tag.

The shop is open from 10 a.m. to 8 p.m. during its shortened soft opening hours this week and will celebrate its grand opening Saturday, Jan. 28 with free 24-ounce sodas to customers from 10 a.m. to 10 p.m. 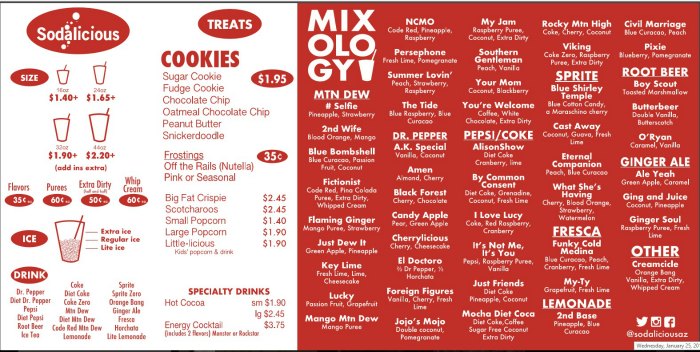