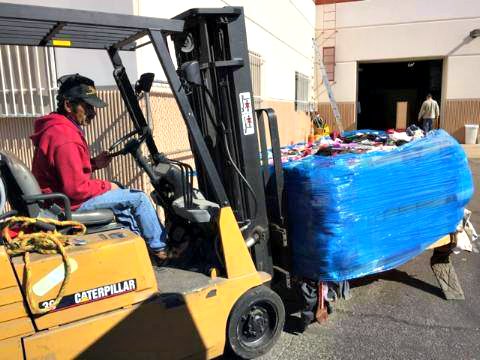 Contributed Photo/Courtesy Rev. Sherry Brady: A forklift unloads a pallet of donated clothes and linens for immigrants in need.

SAFFORD – Although the holiday season has passed, the time for giving is all year long and locals have banded together to participate in the Inn Project.

The Inn Project is a collection of First United Methodist churches which are aiding refugee families housed by the Immigration and Customs Enforcement (ICE). A bishop of the church received a request from ICE for assistance in providing shelter for refugee children and their parents while they are transitioning and traveling to see a family member.

Reverend Sherry Brady joined  local churches together in the effort to help the refugees. She told Gila Valley Central that the immigrants have been relocated to several churches but are still in need of basic necessities.

“The First United Methodist in Tucson and Christ Church (have been) set up with beds, with bathrooms and showers and they are holding them, but they need stuff,” Brady said. “They have nothing, so we’re getting toiletries, linens, towels, clothing, shoes, backpacks and food, so when they go into the bus they will have food.”

Faced with a small window to visit their families in the United States, the only thing these immigrants are given is a brief amount of time.

“They used to just dump them at the bus station and they didn’t have anything, no money, no clothing, no nothing,” Brady said. “They’re probably going to be deported. They’re Mexicans, Guatemalans, anyone that is trying to come to the United States. They’re in the custody of ICE and they have a little window when they are allowed by ICE to go see their relatives in the United States before they have to come back to go to court. They have court dates. Some of them might be able to stay, some might be deported. Two years ago, they were just dumping them at the bus stations with nothing.” 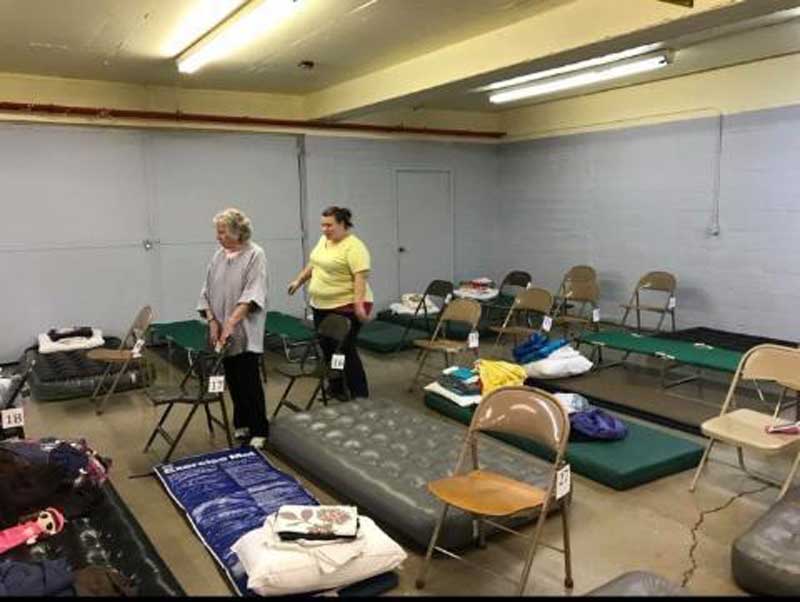 Contributed Photo: This is a glimpse into one of the shelters in Tucson.

At 9:30 on Monday morning, Brady and several others embarked to Tucson to drop off the supplies gathered by various religious groups in the Gila Valley for the immigrants. Just as they were about to leave, however, more items were dropped off. With a van full of food and toiletries, and a U-Haul packed with a pallet of clothing and linens donated by the Graham County Rehabilitation Center Thrift Store, Brady said she would gladly organize another trip to Tucson if anyone would wish to contribute their time and energy to donate once again.

Two major churches aid in housing the refugees.  One will house mothers with children, and the other will house fathers with children. ICE officials have assisted in preparing the churches to receive the young families, and the first families will arrive on Tuesday, Dec. 13. We don’t know how long this will continue. Yesterday, ICE personnel said San Antonio has been doing this for three years and right now the numbers are increasing, but no one knows how long there will be a need. Estimates indicate between 10 to 50 children and parents at the host sites per day.

While two churches are hosting and sheltering the families, it will take all of us to provide care for these children and their parents. Churches are uniting by providing donations. Money is needed to provide blankets, mats, car seats, food, etc. If you or your church is interested in contributing, send your monetary contribution to Desert Southwest Conference at 1550 E. Meadowbrook Ave., Phoenix, Arizona 85014, with a note in the memo stating The Inn Project.