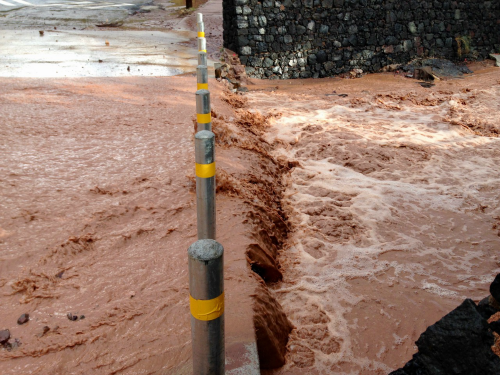 Contributed Photo/Courtesy Ian McGaughey: Rain storm runoff runs swiftly across Park Avenue in Eastside Clifton during a storm that hammered Clifton on Thursday afternoon. Work by the town of Clifton on the swale greatly improved runoff from Devil’s Canyon. In the past, the street was often completely blocked by rocks and other debris during a heavy storm. The improvement now results in flood water draining swiftly into the San Francisco River.

CLIFTON – A heavy rain storm pounded Clifton on Thursday afternoon and left piles of rock and mud along a section of U.S. Highway 191 and Turned Avenue in South Clifton.

Arizona Department of Transportation crews moved in right after the end of the storm to remove mud and rocks from a section of the highway between the Old Clifton Train Depot and Veterans Park. Steep, rocky cliffs are located on the west side of the highway. There are many loose large and smaller rocks along the cliffs, particularly across from the train depot.

Town of Clifton Public Works crews began clearing rocks and other debris from side streets even before the storm’s end. 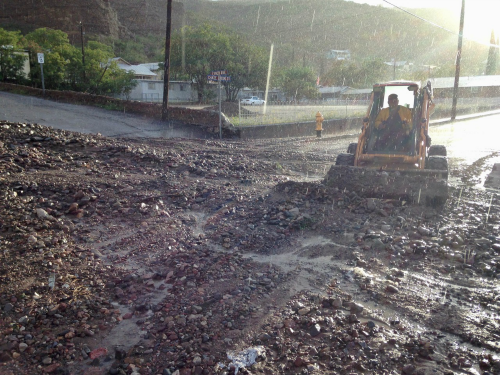 Contributed Photo/Courtesy Ian McGaughey: Rock and debris are piled in a drainage ditch at the intersection of Chase Creek and Lynch streets during a Sept. 30 heavy storm that struck Clifton . Improvements made at the site by the Town of Clifton made it possible for water to drain more rapidly into nearby Chase Creek. Town work crews were also able to more quickly remove rocks and other debris.

On the highway, deep pools of muddy water formed along its west side, bringing traffic to a crawl. There was some frustration among motorists when railroad traffic barrier arms malfunctioned near Veterans Park and brought traffic to a complete halt.

The delay lasted 20 minutes at most as Clifton Police Chief Omar Negrete quickly arrived on the scene and stood in the driving rain to direct traffic around the barriers.

Mud and rocks piled onto Turner Avenue in South Clifton. Homes along the east side of Turner are located at the bottom of a hillside, just below Mares Bluff Veterans Memorial.

Muddy water came gushing out of drain pipes located along the sides of some homes. Shortly after, runoff included tons of rocks that began pouring onto the street. However, the mud and rocks did not block the street. Most of the debris remained piled high at the bottoms of staircases or front yard retaining walls of those homes directly affected by the runoff.

While the runoff of rocks and storm water is not uncommon on Turner, it was unusual to see runoff pouring from Turner onto 7th St., which runs from Turner to U.S. Highway 191 and the Arizona Eastern Railway tracks. Storm water ran like a small creek down 7th. It carried rocks that ended up next to the railroad tracks. There were rocks large enough and piled high enough to make for very cautious crossing, even for vehicles with high clearance.

As usual, storm water and rocks clogged a drainage ditch at the intersection of Chase Creek and Lynch streets. However, due to work the town has done at the intersection, runoff drained more swiftly into nearby  Chase Creek. Rocks and other debris did not pile as high as they previously had so work crews removed the blockages more quickly than in the past.

Town Manager Ian McCaughey said efforts by the town to abate street flooding made a major difference in storm runoff draining into the San Francisco River, which flows through the heart of town. He gave an example of work on a swale on Park Avenue in Eastside Clifton. Located near the Freeport McMoran guest house, there has always been heavy runoff from Devil’s Canyon onto Park Avenue that had often left the street impassable.

Major work on the swale now allows runoff and rocks to more quickly drain directly into the San Francisco.

McCaughey said there was some localized flooding but, as of Friday morning, he did not have any details immediately available. At least one home on Turner Avenue was damaged by storm runoff. Water ran over a rear retaining wall at the home near the intersection of Turner and Webster avenues. A professional cleaning crew arrived around 9 a.m., Friday to begin cleaning the home’s interior. Cleanup continued well into the afternoon.

How much rain fell is also unknown as Clifton does not have a rain gauge to measure precipitation. 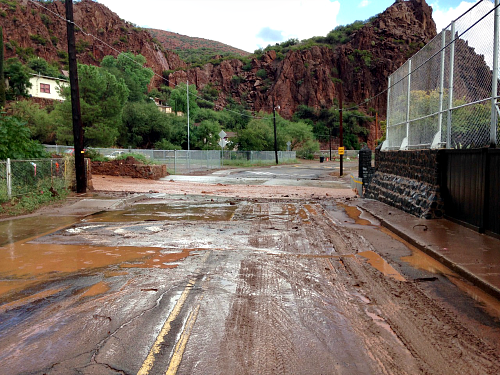