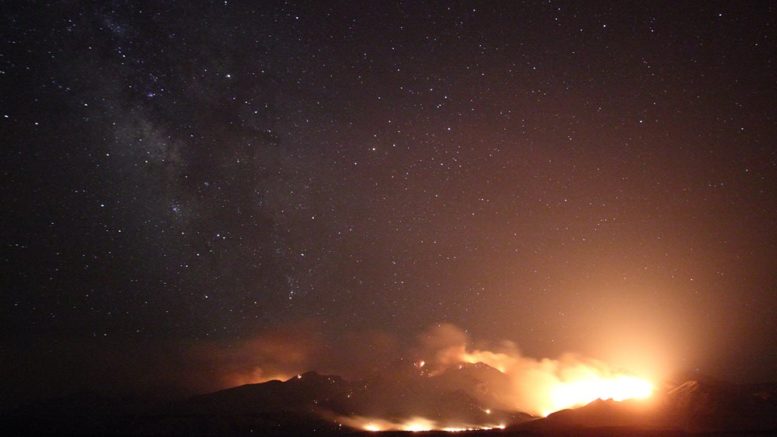 Eric Burk Photo/Gila Valley Central: The Frye Fire burns Mount Graham as the Milky Way and the constellation Scorpio pass overhead in this 20-second exposure taken around 11 p.m. on June 17. Winds on Monday pushed the Frye Fire out of the Nuttall Complex burn scar.

Firefighters pulled back to lower region 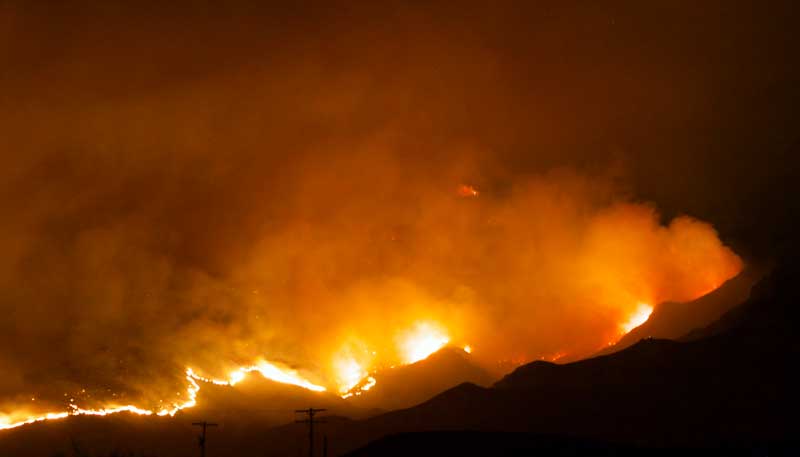 A furnace-blast of hot winds increased the Frye Fire in Ash Creek and other areas Monday afternoon, which created a huge smoke column and forced firefighters out of their staging area at Columbine camp and the operations at Mount Graham International Observatory (MGIO) and moved them down the road to Treasure Park.

The wind drove the flames and the heat kept aircraft grounded at times as fire lines were crossed.

The air support that has been so badly needed did come out in force Sunday, however, with seven air tankers dropping slurries combined with multiple helicopters doing water drops. According to Type 2 Southwest Area Incident Management Team Incident Commander Arthur Sinclair, the cost to fight the fire is roughly $1 million per day. As of Monday afternoon, the fire was listed at 10,896 acres.

At a public information meeting Monday night, fire officials said while the previous plan was to stop the progression at the MGIO, Bible Camp and Old Columbine cabins, the change in the weather has now blown the fire past some of those fire lines. While the lines have now been pushed back to a further Forest Road to the south, the MGIO and Bible Camp are no longer under threat because the fire has moved past them, according to Type 2 Southwest Area Incident Management Team Operations Section Chief Ralph Lucas. However, the fire has yet to pass by the cabins in Old Columbine, which do have some of the same protections in place that were at Bible Camp and the MGIO. 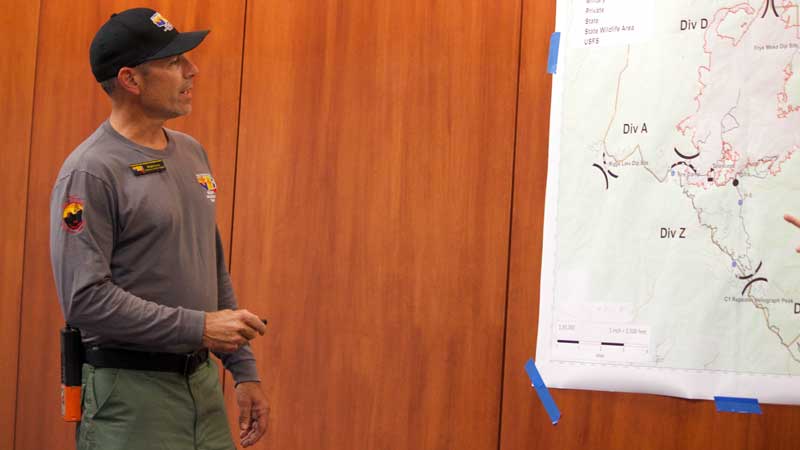 For the MGIO, back burning operations and multiple fire retardant slurries were dumped to help keep it safe Sunday as the fire encapsulated it.

On the western side, the fire jumped fire lines and has now moved out of the burn scar of the 2004 Nuttall Complex Fire. The lower region of the fire in the west is not currently staffed, but just to the east where the Shingle Mill drainage is being consumed has Hot Shot crews battling. If the fire were to move toward Cluff Ponds and residents in the area, Lucas said it would put itself out for lack of fuel.

“We’re not super worried about it getting out in the flats and racing toward any homes because it’s just simply going to go out,” Lucas said. “There are not enough ground fuels to carry the fire along there.”

There are currently no residences at risk from the fire. 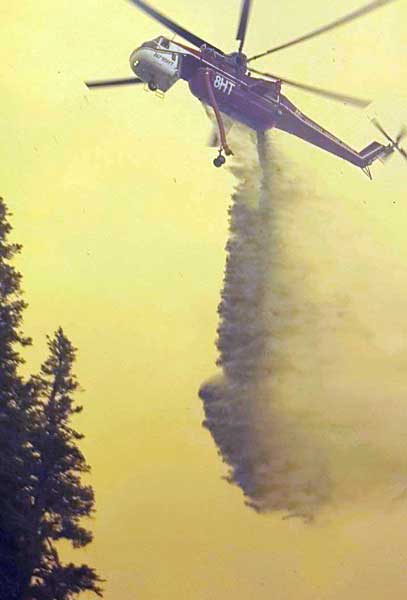 On the eastern side, there are currently no fire lines to stop the fire from progressing all the way to Highway 366 (Swift Trail) but a variety of options, including aerial ignition to fight fire with fire, back burning and slurry drops could be made to stop the fire’s progression at Marijilda Canyon. Lucas, who did the structure protection plan for Turkey Flat during the Nuttall Complex Fire, said they are using the same plan and have already ordered supplies. Additionally, they have begun installing the same prevention techniques that were used at Bible Camp. A couple of Hot Shot crews were in the Turkey Flat area Monday, preparing the area around the 71 cabins.

Lucas said while aerial options will be used to battle the fire’s progression toward Highway 366 but no ground crew will be put in there due to the danger.

“I can’t justify putting firefighters into this kind of region with this kind of fire behavior and have a good conscience about it,” he said. “So, what we’re doing is we are using main roadways as out contingency line . . . We’re hoping and praying that we’ll have some sort of weather event that will help us out.”

Contributed Photo/ Courtesy LBTO (K. Newton): An air tanker makes a fire retardant slurry drop next to the MGIO to help stop the fire and save the observatory. Tanker slurry drops will likely be utilized on the fire’s eastern front in an attempt to stop its progression.

While the community and firefighters may be praying for rain, the forecast doesn’t look favorable for such an outcome in the near future.

“(There is) no season ending event, which would be enough rain to stop the fire, that we are seeing anytime soon,” Sinclair said.

“This fire could do some things in the next couple of weeks,” Lucas said. “We need a season-ending event as the incident commander referred to, to really make sure this thing is done.”