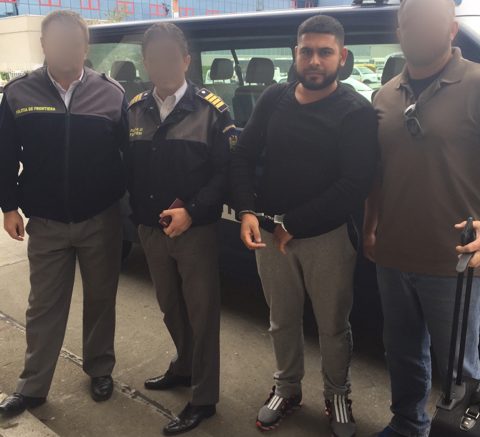 PHOENIX – A Romanian national wanted in France for sex trafficking young women and forcing them into prostitution was turned over to Romanian authorities Wednesday at Henri Coandă International Airport in Bucharest, Romania, by deportation officers with U.S. Immigration and Customs Enforcement (ICE).

Cosmin Diamant, 28, was transferred by ICE Enforcement and Removal Operations (ERO) to the custody of the Romanian police. Diamant’s repatriation follows his arrest at his Phoenix residence in April by officers with ERO and ICE Homeland Security Investigations (HSI). He was detained by ICE on administrative immigration violations after the agency learned through Interpol about an outstanding warrant issued by a French judge which charges him with human trafficking and forcing females into prostitution. In August, an immigration judge ordered Diamant removed from the U.S., paving the way for this week’s repatriation.

According to that French warrant, issued Oct. 21, 2013, Diamant was involved in a large-scale international network that trafficked Romanian women to France where they were forced into prostitution. Convicted of the charges in absentia, Diamant was sentenced to five years in prison. “Human traffickers who sexually exploit women for profit and believe they can evade justice by fleeing to the U.S. should heed this warning, you’ll find no refuge here,” Phoenix Field Office Director Enrique Lucero said. “ICE continues to work tirelessly to identify and repatriate fugitives like this individual to ensure they’re made to answer for their alleged crimes.”