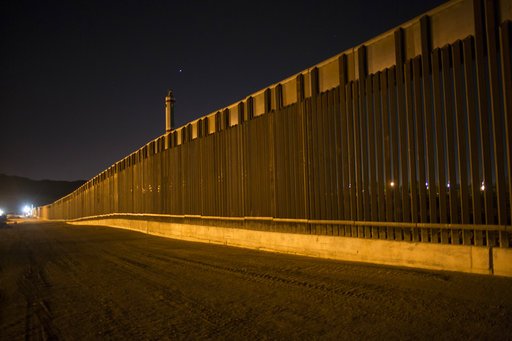 FILE - In this March 30, 2017 file photo, a portion of the new steel border fence stretches along the US-Mexico border in Sunland Park, New Mexico. Congressional Republicans have a new talking point about President Donald Trump’s border wall: It’s not really a wall at all. The issue arose this week as Congress squabbled over government-wide spending legislation including money for security measures along the U.S.-Mexico border. (AP Photo/Rodrigo Abd, File)

WASHINGTON (AP) — Congressional Republicans have a new talking point about President Donald Trump’s border wall: It’s not really a wall at all.

Instead, the wall is “a bit of a metaphor as to border security,” in the words of Rep. Mario Diaz-Balart of Florida.

Or, a “quote, wall,” as Sen. John McCain of Arizona put it: A combination of drones, towers, anti-tunneling devices and the like that add up to enhanced border security.

The issue arose this week as Congress squabbled over government-wide spending legislation, including money for security measures along the U.S.-Mexico border.

After the president backed off his demands in face of Democratic objections, the bill is not expected to include money specifically designated for constructing the “big, beautiful” border wall Trump repeatedly promised during the campaign. Instead the legislation will pay for other border security measures, perhaps including access roads and gates and technological improvements of various kinds.

That might seem to fall short of Trump’s commitments. But according to Republicans like McCain and Diaz-Balart, Trump’s promised wall may be better understood as a figure of speech anyway.

“In my view you’ve got to have an interpretation of a, quote, wall as a barrier to illegal drugs, illegal people, these gangs that are coming from the Central American countries, and that means using every bit of technology that you have,” said McCain, who dined with Trump at the White House Monday night.

As for whether the president shares his views, McCain said: “I believe that he is at least considering that definition.”

Experts and lawmakers of both parties have long dismissed the notion of a physical wall along the 2,000-mile border as unnecessary, impractical and excessively expensive, especially on portions of the border that run through the Rio Grande or sovereign Indian land. Cost estimates top $20 billion, and even Republicans dismiss Trump’s oft-repeated promise that Mexico will end up paying for it. Republicans in border states are particularly skeptical and none have embraced Trump’s promise of a physical wall.

Homeland Security Secretary John Kelly has acknowledged there won’t be a wall “from sea to shining sea” and instead has discussed a combination of structures, technology and manpower. But Kelly has been firm that there would be some new physical structures at the border.

Republicans who faced uncomfortable questions this week about the need to pay for an actual wall found refuge in Kelly’s positioning.

“Listen to the way he defines it — that’s what we’re working on,” said Sen. John Hoeven, R-N.D. “This is about wall, fencing, repairs, technology, people, all in the right balance to do the best job. Boy, that seems pretty reasonable.”

But some immigration hard-liners were outraged as fellow Republicans debated about what constituted a wall.

“The pro-amnesty people are trying to redefine the word ‘wall,'” said Rep. Steve King, R-Iowa. “They don’t want security at the border, they never have, and we should not let them play linguistic or semantics games to try to pull down a mandate that the American people commanded when they went to the polls.”

As for Trump himself, his description of his promised border wall has evolved since he first announced the plan during his campaign kick-off speech.

“It is way past time to build a massive wall to secure our southern border – and nobody can build a bigger and better wall than Donald Trump,” he declared that June day.

During the campaign, he repeatedly described an “impenetrable physical wall” along the length of the southern border that would be built from concrete, rebar and steel and stand as high as his venues’ ceilings. The wall would not have to be contiguous, he sometimes allowed, thanks to natural barriers. And it would have “a big, beautiful door” for people to enter legally. The physical wall would be enhanced with technology, including above-and below-ground sensors, towers, and aerial surveillance, he said.

After the election, Trump seemed to relax his expectations, telling “60 Minutes” that he would be OK with a fence along certain stretches — though he maintained a wall remained more appropriate for others.

But as recently as Tuesday Trump was back to touting his wall, insisting at a White House event: “The wall’s gonna get built” and the building will start “soon.”