SAFFORD – As Arizona’s summer weather intensifies, the Tucson branch of the National Weather Service is preparing its staff and a network of volunteers to make sure severe weather warnings are accurate and timely.

NWS Tucson staff held a Skywarn Spotter training session at the Graham County General Services Building in Safford on Monday evening. About 10 people attended the annual event and learned to be amateur weather spotters. Forecaster Chris Rasmussen taught most of the class, focusing on specific types of events spotters should report.

Ken Drozd, who coordinates weather warnings issued by the district, said there were about twice as many attending as last year, but that he had expected even more after the dramatic hailstorms in the Gila Valley last fall. The Safford training was one of nine sessions held throughout southeast Arizona. Drozd said they plan the trainings to coincide with spring and the beginning of summer. 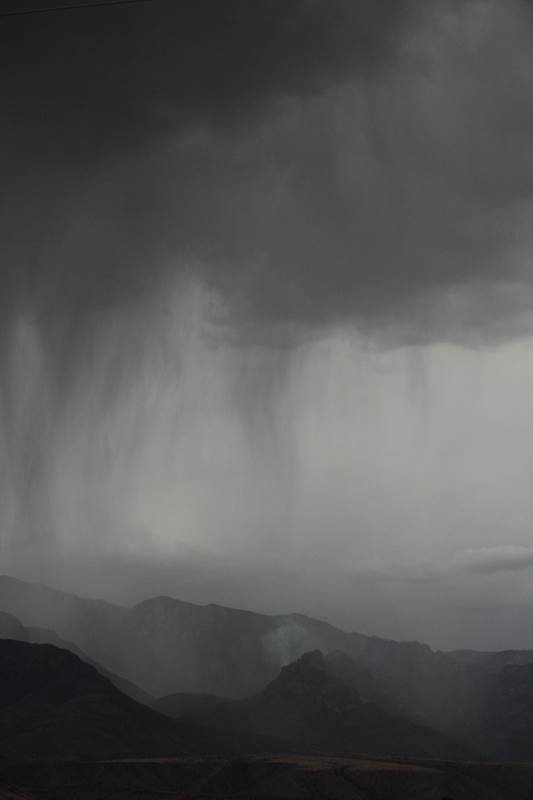 Eric Burk Photo/Gila Valley Central: A thunderstorm pours rain on the Frye Fire, which was caused by lightning from a different thunderstorm earlier on Wednesday, June 7. Lightning-caused fires should be reported to the NWS as well as local fire departments.

Skywarn spotters should call the office as soon as they observe phenomenon, including wind more than 50 miles per hour, hail dime size or larger, more than half an inch of rain in an hour or eight inches of flowing water in roadways. Tornadoes, substantial snowfall or poor road visibility should also be reported. Drozd estimates there are 100 spotters in the Gila Valley.

Rasmussen said while radar can help identify intense rainfall or hail, it has limitations. First, the radar array for southeastern Arizona is located at an elevation of 5,000 feet in the Empire Mountains south of Tucson. That means the radar can only see atmospheric events higher than 5,000 feet and taller mountains can block radar coverage. In the map Rasmussen showed the class, the Gila Valley appeared to be in an area of poor radar coverage. Second, radar cannot detect all kinds of weather.

“Damaging winds are really what causes most of the (weather-caused) damage,” Rasmussen said.

Winds rarely show up on radar if there is no accompanying rain, meaning Rasmussen and his co-workers may be completely unaware of some severe events. Intense windstorms like downbursts and microbursts are common, and can build off each other or cause dust storms. These storms are especially common in the beginning of monsoon season, which is officially June 15 through September 30.

“This is where that advantage comes from having these spotters,” Rasmussen said.

Additionally, the office can call spotters when radar detects severe weather, and ask for their observations, creating a data point to calibrate or confirm radar information. Drozd said that extra information may make the difference between a severe weather warning being issued, enabling people to make decisions to save lives and property. That’s why rapid reporting is critical.

Although massive supercell thunderstorms are common in the midwest, Arizona’s landscape limits the formation of such highly organized, area-wide storms. Instead, the Gila Valley normally has pulse-type thunderstorms, individual short-lived cells that quickly pop up, generating lightning, rain and hail, and then die out.

This National Weather Service graphic illustrates how falling cool air, known as a downburst, can generate heavy winds around the perimeter of a storm, even when no rain reaches the ground.

“We only have a period of 10 minutes or so to be able to monitor it,” Rasmussen said.

The public is also encouraged to promptly report severe weather using social media or by submitting a form at http://www.srh.noaa.gov/StormReport/SubmitReport.php?site=twc. Drozd and Rasmussen both emphasized the convenience of Twitter for reports since it is rapid and concise. Drozd encourages people to use a smartphone to take a picture of a beautiful or severe weather phenomenon, and then post it to Twitter with the hashtag #azwx .

Wade and Sue Mosley attended the training for the first time. They are ham radio operators from Pima and were surprised when they heard a familiar voice coming from the front row of students. Byron Mccabe is a ham radio operator from San Simon, and although he and the Mosleys knew each others’ voices, they had never met in person until the spotter training.

“Amateur radio operators are there to assist other people and prevent harm,” she said.

Attendee Jean Wiley drove an hour from her home on Dragoon Road in Cochise County. She heard about the class while shopping online for a home weather station. She is excited to observe and report severe weather.

“I’ll be watching (the weather) with a different kind of eye and wondering if the wind’s strong enough to report,” she said. “It’s not good enough if the lawn furniture flies away, the tree has to too.”