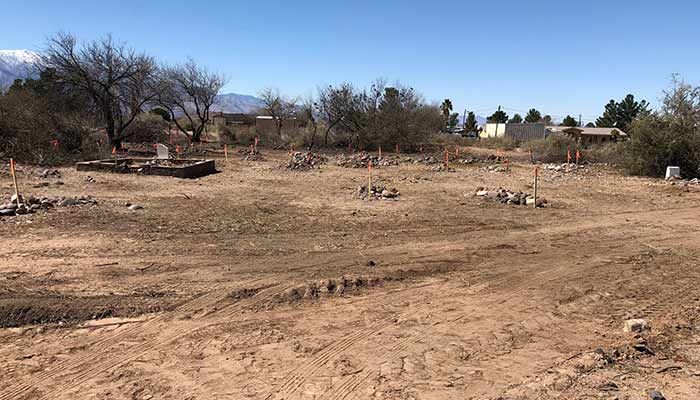 SOLOMON – Volunteers for the Graham County Historical Society and Southeastern Arizona Clean and Beautiful (SEACAB) joined forces Saturday to clean up Epley Cemetery in Solomon. The site was discovered three years ago by historian, Danny Haralson. Haralson said that he’s been trying to get the site cleaned up ever since. The plot is owned by a local farmer who gave permission for the group to come in and clean it up.

Tim Linden, Board Chair of SEACAB arrived early with some heavy equipment to move some old farm implements out of the way so volunteers could clear out weeds and mesquites to uncover the old burial site. Graves were marked with stakes, so workers could see where they were. Several large trailers were filled with bushes and tree limbs and taken to the dump. Linden said that they hoped to get permission from the land owner to create a permanent marker for the grave site.

Jay Rascoe, founding member of SEACAB said, “I think this is a very worthy project. We should respect the dead, and we need to take care of all the history here.” 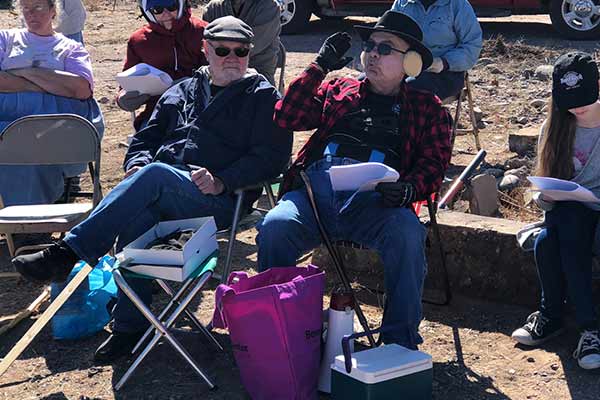 Hal Herbert and Danny Haralson give a history presentation on the cemetery and the area.

Historians Hal Herbert and Danny Haralson presented a history of the area to the volunteers who came to clean up the graveyard. Herbert said that the area was originally called Pueblo Viejo, or the old village before I.E. Solomon came here. Solomon and his family came from Poland, and originally settled in Pittsburg Pennsylvania where he became acquainted with building charcoal kilns. He brought that skill with him out here.

A group of Jewish settlers with the last name of Fruedenthal came to America just before the Civil War. Immediately after the Civil War, the Fruedenthals, came west and ended up in Las Cruces, New Mexico. They started inviting their friends and relatives to come out west. I.E. Solomon came west because his wife was a Fruedenthal.

Solomon figured out a way to make money by building a Kiln to provide charcoal for the Morenci mine, so he headed west along the Gila River and eventually ended up in the little village called Pueblo Viejo. Solomon thought the area was the perfect spot to build his kiln because there was a lot of mesquite in the Gila River and good labor to run the business. He started building kilns immediately and sent to Las Cruces to get his wife and three kids. They arrived in 1876.

Solomon built a successful enterprise out of charcoal. He manufactured it in Solomon and shipped it by wagon from there to the mines in Morenci. Solomon eventually started a general store. He bought $2000 worth of merchandise with the help of his relatives to open his first store here.

He became a member of the board of directors of the Gila Valley and Globe Northern Railroad, which is the railroad we call Arizona Eastern now. He wanted the railroad to come through Solomonville but the manager of the railroad said it was too far out of their way. Consequently, the county seat was moved from Solomonville to Safford which also drew most of the business away from Solomon to Safford. Solomon has existed ever since but has not been a thriving community for quite some time.

The Epley cemetery was created very soon after the Solomons and the Epleys settled here. The Graham County Historical Society has identified 25 people who are buried there. All of the prisoners that got the death penalty were hanged at the Solomonville courthouse and were buried here.

List of those buried in the Epley Cemetery, Solomonville, Arizona

C.V.D. Lovejoy – Shot May, 1879 by Francisco Gijalba, reportedly over a lover’s triangle.

Harriet Martin – Mother of John and buried next to him

Charles Sinclair Wood – Shot by Pliny Stokes at a whore’s room in the “Red light disctict of Miami on January 10, 1911. His body was returned to Solomonville to be buried in the Epley Cemetery. Wood was killed in the line of duty as deputy sheriff for Gila County.

Epifanio – A horse thief hanged by masked vigilantes about two miles west of Pima on June 27, 1882. He was wounded in the head while attempting to steal horses near Pima and was sent to Tucson to recuperate. When deemed able to travel, he was transported back to Fort Thomas where newly elected sheriff Stevens and County Attorney Bolan picked him up in a buckboard with a palate in the back. When they were about two miles west of Pima, they encountered about 30 men from Pima I hoods who demanded custody of the prisoner. He was stood up in the buckboard and hanged from a tree along the river bottom. When the deed was done, they gave the body back to the sheriff to take to Solomonville for burial.