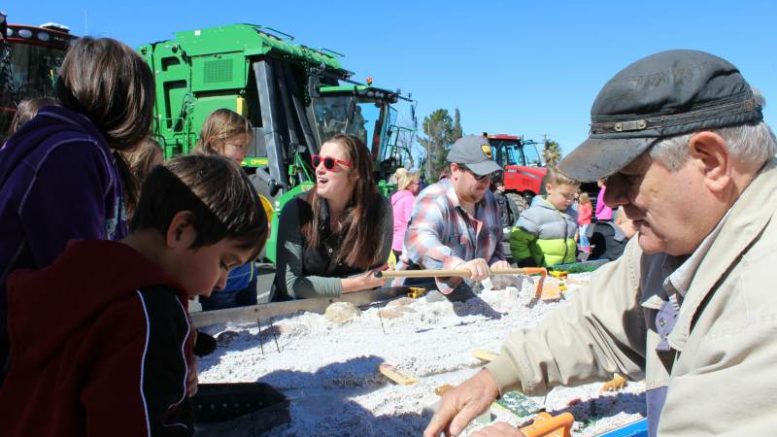 A model made of sand, sponge, and mini models help illustrate the Gila River for local children and parents at the 2018 STEAM Festival. - Gila Valley Central Photo

THATCHER- Although the day was chilly, hundreds of people flocked to the Science, Technology, Engineering, Arts, and Mathematics Festival (STEAM) on Saturday.

Free to the public, and located at the Eastern Arizona College main campus, as well as the Discovery Park Campus on Saturday, this year’s STEAM Festival did not disappoint. The annual festival is a combination of efforts by local community entities and businesses, setting up vending booths, as well as health services performed by the Mount Graham Regional Medical Center. On Saturday morning, there was also a 5K Rock of Ages run, which was put on at the EAC campus in partnership with the medical center and Diabetes Coalition. The festival’s activities included blood draws, science exhibits, chalk art areas, Gila Valley farming technology displays, and much more. 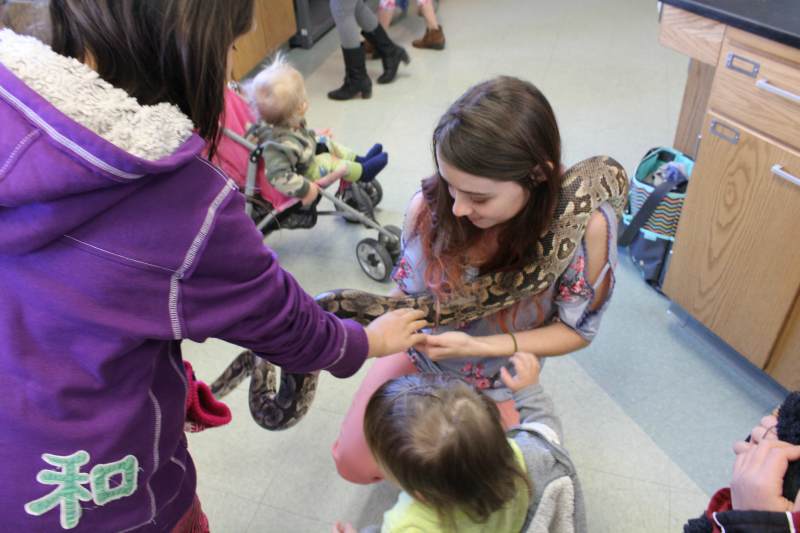 Brooke Curley Photo/ Gila Valley Central: Local kiddos were given the rare chance to pet this 9-year-old snake while it was being held by EAC student Hannah Rosen.

In one of the biology labs, EAC student and wildlife biology major Hannah Rosen talks to local children as they come visit the animal lab. Rosen let the local kids pet and hold one of the largest snakes in the biology lab.  As Rosen held the boa, she was instantly surrounded by children and flooded with questions.

Kurt Palmer, is the community outreach coordinator for the Mary-Lou Foulton Teacher’s College for the secondary education program at Arizona State University. Palmer was the individual manning the ozobot station. Ozobots are tiny robots that are capable of following coding directions and moving along a paper sheet.  Palmer told Gila Valley Central that his experience with this year’s festival to be very positive.

“It’s been a fantastic science festival. At the ozobot activity, we’ve had several hundred people come through from kids in strollers to 70-80-year-olds doing this coding activity. It’s a great interactive tool, and it’s a good way to stimulate kid’s minds and it helps them with problem-solving and critical thinking,” Palmer said. “It (the ozobots) allows some teaching and learning between kids and parent and between kids and their friends. We’ll have some come in that have done this activity before while their buddy has not. So they’ll sit down and they’ll teach them (the friend) about it and they’ll show them the coding exercises and how it works and so it’s been good for the social interaction, the learning, the engagement, problem-solving, and critical thinking. Across the board, it’s a great way to learn while you’re having fun.”

The Ozobots project was a cooperation between Eastern Arizona College and the Mary Lou Fulten Teachers College at ASU. There were roughly 30 rechargeable ozobots at the festival this year.   The ozobots were just one of the many activities that were available for families to enjoy at the 2018 STEAM festival.

Love is in the air for this year’s Spring Sing