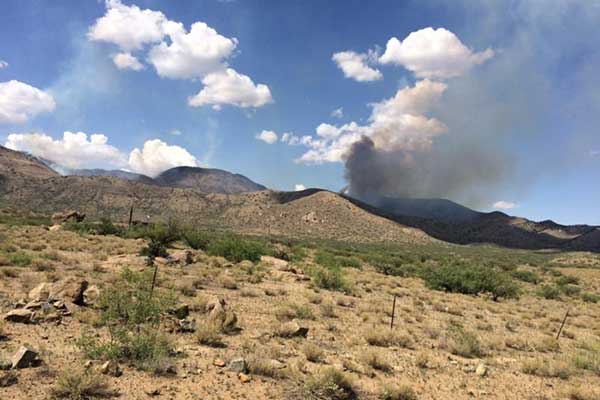 The Howard Fire located 8 miles south of Bowie, Arizona within the Dos Cabezas Mountains wilderness area. The fire was reported late afternoon on 7/24. The majority of the fire activity is occuring within the wilderness area, but firefighters are monitoring its progression closely, as there is private property on the fire’s southern edge and structures within 2 miles.

Fire behavior was moderated by higher humidities over night and into the morning, but increasing daytime temperature and area thunderstorms, which bring strong, erratic and gusty outflow winds, are a concern for firefighters. These conditions could lead to increased fire activity and could rapidly fire spread in all directions.

Fire managers are working with the local county emergency management and law enforcement. Homeowners in the area are being urged to be vigilant, monitor fire activity, and prepare to evaucate if necessary.

The lightning-caused fire has burned approximately 300 acres and has 30 personnel fighting it.

The Bruno Fire burning in Cochise County is confirmed at 2500+ acres after this afternoon’s IR flight. Today, despite the extreme temperatures and difficult terrain, firefighters successfully fired out and secured the Beacon Hill Communications Site where multiple communication towers stand. Those firing operations significantly decreased the threat to that infrastructure. However, engines remain committed to providing structure protection to a nearby ranch that’s within a 1/4 of a mile from the fire. The Bruno Fire continues to burn through rugged and rocky terrain, through grasses and brush. The fire continues to show signs of active fire behavior, specifically on the northeast side of the fire, as it moves closer onto the Coronado National Forest. Aircraft, multiple hand crews and engines are working toward securing the perimeter utilizing burnout operations, as needed, to protect values at risk. Firefighters are dealing with extreme temperatures and nearby thunderstorms producing high gusts and potential lightning.

The Bruno Fire started on the morning of Tuesday, July 24th, from a lightning strike. The fire is burning 15 miles NE of Douglas, E. of the Leslie Canyon National Wildlife Refuge, and just south of the Pedregosa Mountains. More than 100 fire personnel are assigned to the fire, including multiple hand crews, engines, a Department of Public Safety helicopter, and Air Attack. 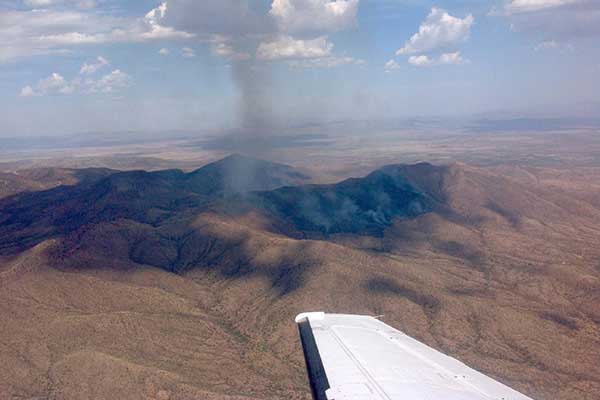