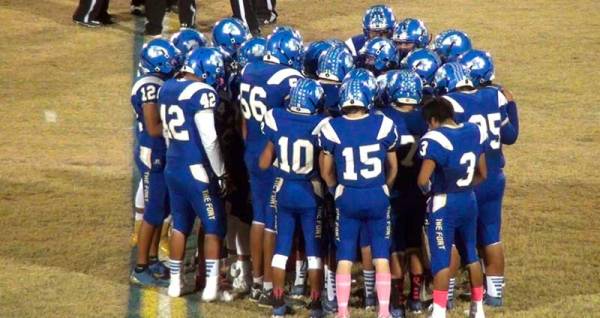 By Lee Patterson
Follow @Radioguyaz99
With the football season just around the corner, we will take an in-depth look at the Gila Valley football teams in a 6 part series of previews. We will preview teams from Graham and Greenlee Counties and Northern Cochise County.

The Fort Thomas Apaches move back into the 1A South for the first time in several seasons. The current team has never played in this league and every region opponent will be new to them. Bracken Walker returns for his 3rd season after guiding the Apaches to a home playoff game last season.

It seems to be a theme this season but another head coach is touting his offensive line as the strongest part of the team. Ft. Thomas has every starting lineman back from last season with quality depth behind them. Jeremiah Bullis, Jaden Preston and Christian Titla will be relied upon heavily this season.

The biggest hole to file this season for the Apaches will be at QB. Even Stringfellow graduated and took with him 2647 all-purpose yards and 36 total touchdowns.

Look for Wide Receivers Kendall Stanley, Drake Olivar to have a big season and Tagipo Fiame will carry the load in the backfield.

You will see Stanley, Olivar and Fiame on defense as well this season. Trejaan Goeyun will anchor the defensive line for coach Bracken Walker. In 8-man football scores are usually higher than 11-man, so don’t let last year’s high points per game average deter you from this defense. If they can get a couple of stops per game and the offense grinds it out on the ground, this could be one of the top defensive units in 1A this year.

If the Apaches can find a replacement for Stringfellow at QB this team could be scary good. With all the returning pieces from last year and a new region, they could come out on top. The move to the 1A South comes at the right time for The Fort, only Salome and Valley Union made the playoffs last season. The rest of the teams on their schedule averaged less than a 1 win per team. It wouldn’t surprise me if Fort Thomas ran the table this season, but will the weak regular season schedule be enough to get them ready for a deep playoff run?