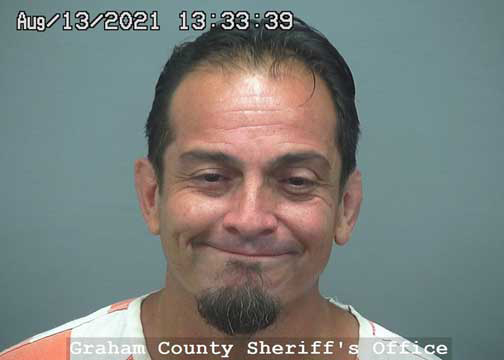 SAFFORD — A man who could have walked away after being told by Safford Police officers he was making too much noise was instead booked into Graham County Jail for resisting arrest and possession of drug paraphernalia.

Officers were called to a local hotel due to the noise Michael Garcia was allegedly making, keeping other guests awake. After Garcia reportedly said he didn’t believe the officers were who they said they were, he was trespassed and walked off the property.

After Garcia left, it was discovered he had an active warrant out of Gila Valley Consolidated Court, and officers caught up with him near a local car wash. Garcia reportedly ignored commands to stop walking and, when he finally did stop, reportedly struggled when officers attempted to place him in handcuffs.

That led to him being taken down to the ground and pepper sprayed, which also hit one of the officers. With assist from Thatcher Police, Garcia was taken into custody and, during a search, a glass pipe with residue was allegedly found on his person.