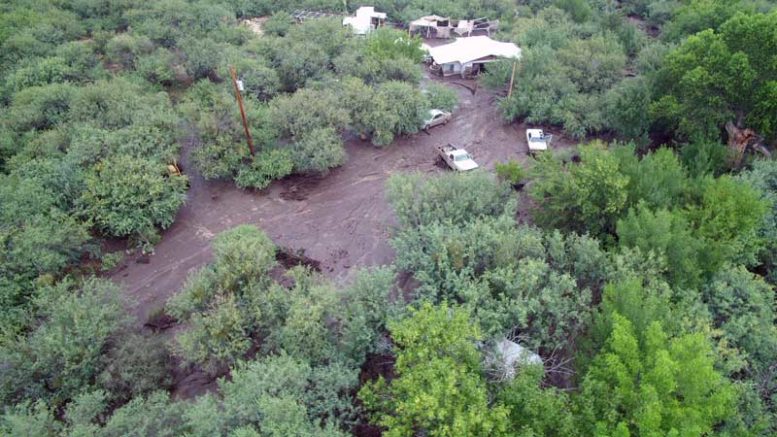 Jon Johnson Photo/Gila Valley Central: A flash flood in Ash Creek of runoff from the Frye Fire send ash and debris through this residence, damaging not only the house but at least three vehicles and an RV.

“Fires will always be a part of life in Arizona,” a spokesperson for the Arizona Department of Forestry said. “We need to find better ways to both prevent and suppress wildfires.” – “Board Of Supervisors To Hold Legislative Hearings On Forest Fires,” Gila Valley Central, Aug. 1, 2017
Here’s a unique idea; as soon as possible put the fire out.
It’s encouraging news that local and state officials are conducting a wildfire related meeting in the General Services Building in Safford, Saturday, Aug. 5, 2017.  However, I noticed representatives of the U.S. Forest Service – the principal federal agency involved in the recent Frye Fire – were not listed as being scheduled to participate.
Maybe they are too busy.  Or, maybe they don’t want to get an ear-full from angry citizens.

As I previously commented, the disastrous results of the Frye Fire on Mount Graham are already beginning to be felt. Unfortunately, the U.S. Forest Service has only offered hollow condolences and a deafening silence regarding their malfeasance in permitting the blaze to consume nearly 50,000 acres when it could have easily been extinguished in the first few hours.

No, I’m not speaking of the efforts of the firefighters in combating the blaze. They arrived after the fire had already destroyed hundreds of acres and then proceeded to do what they were hired to do; fight the wildfire.

Rather, my complaint has always focused on the USFS management – or mismanagement – of the fire in the very beginning. I still find it extraordinarily unbelievable how a small lightning-caused fire, which was reported soon after the strike, was permitted to erupt into an uncontrollable inferno, burning tens of thousands of acres and costing the taxpayers tens of millions of dollars.

At one time, the Frye Fire was the second largest wildfire actively burning in the country, exceeded only by the Brian Head Fire in Utah.

Recent news accounts, including Gila Valley Central’s “Homes Damaged in Ash Creek Flash Flood,” July 31, 2017, are beginning to cast light on what is expected to be a reoccurring theme during the duration of the seasonal rain storms. Although not as extensive, similar flooding south of Safford has also been reported.

Tons of debris and torrents of black water rushed down Ash Creek, submerging roads, fencing, and private property. Several homes in the area north of Cluff Ponds sustained substantial damage. The same area has been pummeled at least twice within the week.

Local county and state assistance are being utilized to help in the cleanup and reopening flooded roads. Individual property owners, however, must rely on their own ingenuity and maybe help from friends, neighbors, churches and other community organizations in repairing the destruction caused by flood devastation.

Here’s a suggestion, in addition to alerting local, state and congressional representatives – as I’m sure many already have – maybe the property owner should document, via photo and estimated damage costs of everything that has been affected by the flooding, and present these reports to the Graham County Attorney’s Office, the Graham County Board of Supervisors’ offices, the state Attorney General’s Office, LD-14 state representatives, the governor’s office, both U.S. senator’s offices and the U.S. Forest Service.

Also, demand for monetary compensation from the Forest Service should be attached. In my opinion, it is totally unfair to expect the local taxpayer, property owner or insurance provider, to pay for damages directly related to the Forest Service’s negligence/incompetence associated with this issue.

Likewise, it’d be interesting to hear the courtroom testimony of certain USFS officials in explaining their decisions, fire strategy, and performance while the Frye Fire was only an acre or two in size. I, for one, would like to learn more about the thought processes involved in allowing this travesty to occur.

While the chances are minimal of any USFS boss losing their job because of the way the fire was initially handled, the excuses given would probably be very interesting, if not comedic.