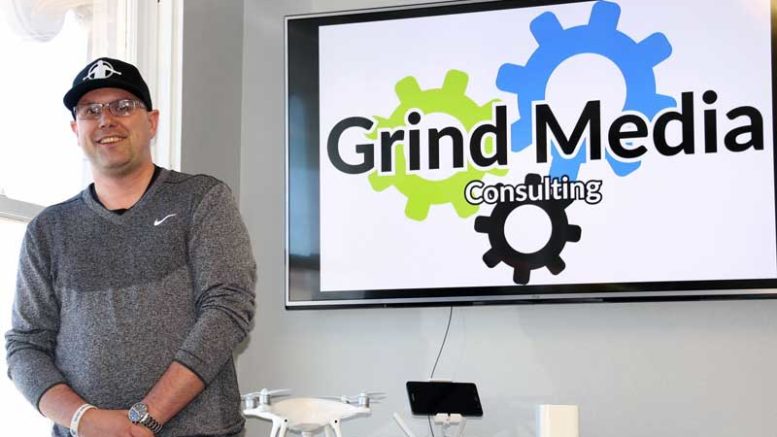 SAFFORD – A promising startup media consulting company appeared on the scene five months ago, but much like Icarus from Greek mythology, the company soared too high too fast, quickly burned up its capital and has now drowned under a sea of debt. 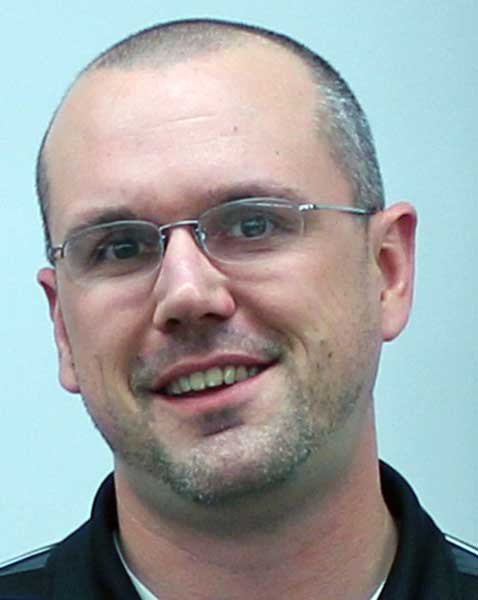 Grind Media Consulting LLC began March 6 with Tom Cornelius as its only recorded principal on record and its chief executive officer. Formerly, Cornelius was a respected and well-liked English teacher at Safford High School, who also coached boys basketball and was an assistant coach on the golf team.

After reportedly receiving an inheritance, Cornelius abruptly quit his position at Safford High School over its spring break and soon after opened up Grind Media, utilizing his contacts at the school to hire various students to work for him, plying them with cars, iPads, computers and cell phones as incentives, and sent them off to hock his product.

According to its still functioning website, Grind Media Consulting aimed “to help businesses worldwide achieve their goals in terms of their marketing approach.” The company promised to deliver a variety of media needs, including creating and managing websites, apps, and commercials as well as running a variety of social media platforms. While the sales pitch was good, the follow through was not, and those who dealt with the company were left holding the bag. 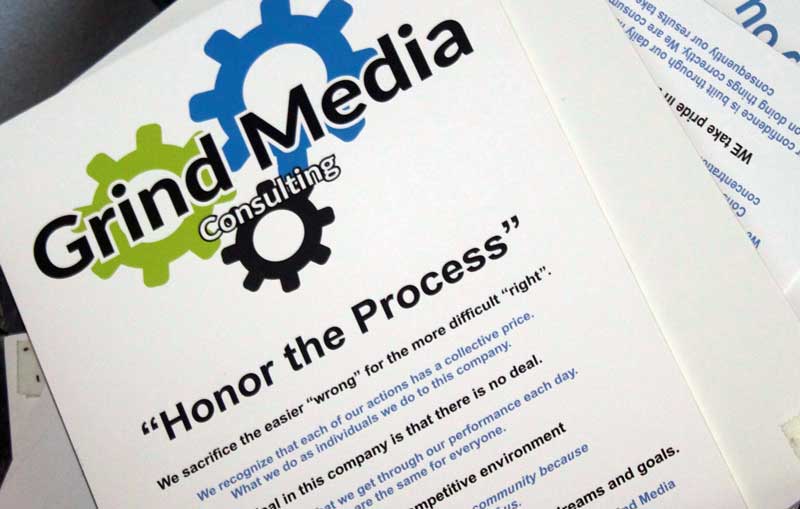 Jon Johnson Photo/Gila Valley Central: Some of the very few items left behind are slogan posters Cornelius left for others to clean.

After not coming through on its promises, but still taking in-kind payments of goods, services or cash, Grind Media Consulting cleaned out its office space at 609 5th Ave. roughly three weeks ago, taking or selling nearly everything except for the bathroom sink and leaving behind its slogan posters and business cards for others to clean. Cornelius himself is nowhere to be found now that creditors and lawyers for those taken for a ride have come calling, and he reportedly has fled the state. Gila Valley Central, like many others, has not been able to contact Cornelius to comment on this article. 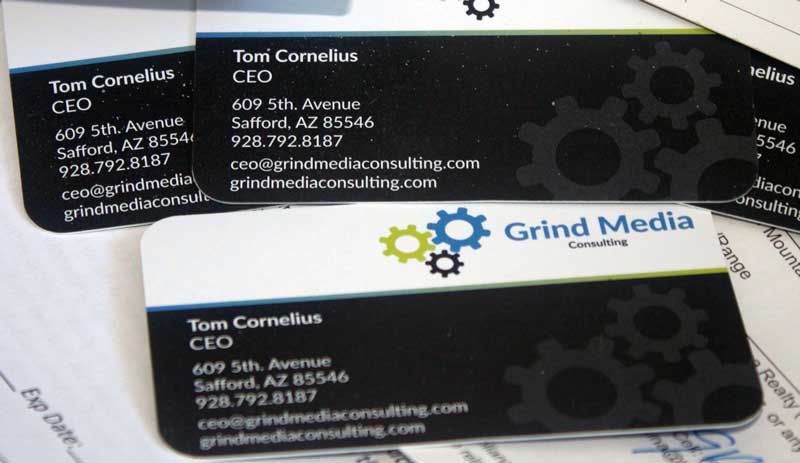 Jon Johnson Photo/Gila Valley Central: Some business cards were also left behind with a phone number that no longer works.

Dale Holladay owns the building Grind Media was located in and said that in the beginning he made a deal with Cornelius to rent just three rooms of the building, and would exchange three months rent for the build-out on those three rooms.  A week later Cornelius opted to take the whole rental space, (approximately 3,500 square feet) and to remodel the rest as well but left before completely finishing the job.  The lease began in March and while a good portion of the building has been remodeled, it was not complete when Grind Media pulled out in July. 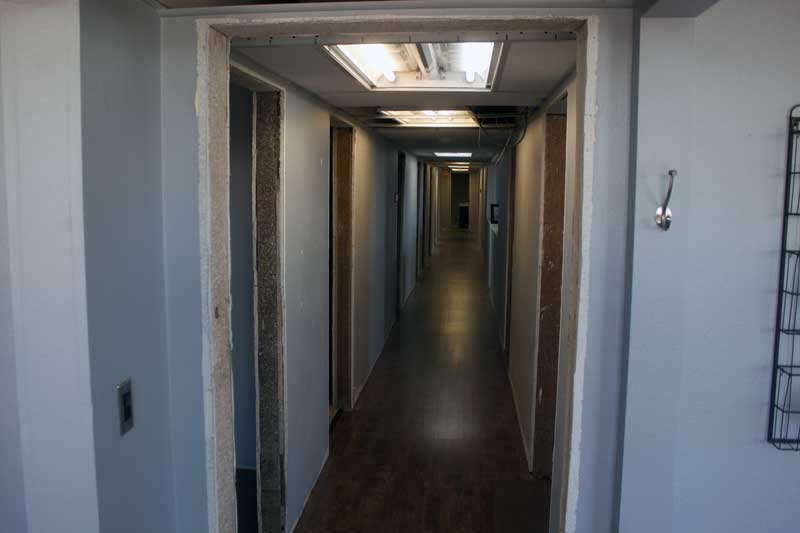 Jon Johnson Photo/Gila Valley Central: Tom Cornelius gutted the building the best he could, even taking the doors off and leaving only a shell of an unfinished office building left.

“He had grandiose ideas I guess,” Holladay said. “I really don’t know how many victims lie in the wake of his venture . . . I was helping him with the rent until the remodeling was done but he never lasted long enough.”

Not much remained of the office when Gila Valley Central toured the building Monday. Along with the slogan posters, paperwork and business cards in the trash, a single picture frame remained as well as a whiteboard at the end office with the names of the workforce and slogans that read “Revenue goal, double each month” and “Let no excite you. They just don’t know what we can do. Find an opportunity to prove it.” 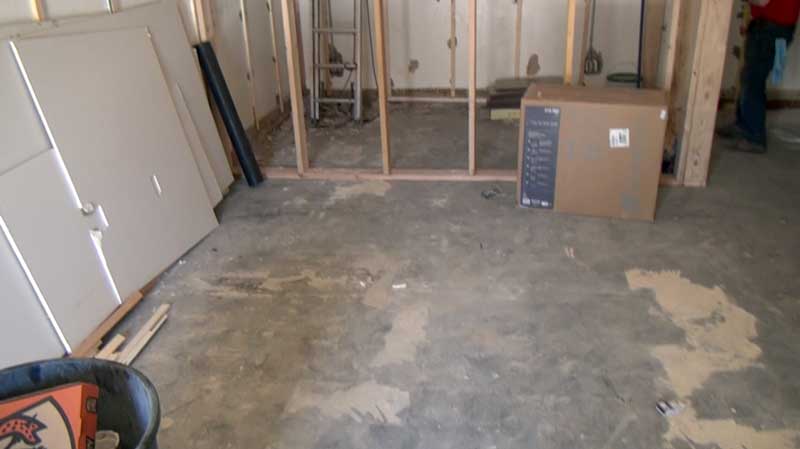 Jon Johnson Photo/Gila Valley Central: The ground floor reception area of the former Grind Media Consulting is the room with the least amount of renovation completed.

One customer who bought into the hype was the Affordable Furniture & Mattress Gallery store in the Mount Graham Shopping Center. Owner Emily Rhinehart said Grind Media offered to create a website, manage all social media and create an online catalog so people could order from their store online and a credit card machine portal at a lower rate than others.

“It was supposed to be up in running in three weeks,” Rhinehart said. “We did pay them in full. It was $1,300 . . . And (we) have since been trying to contact them. They’ve turned off all their phones; they changed all their numbers; they don’t respond to any emails, and they left town.” 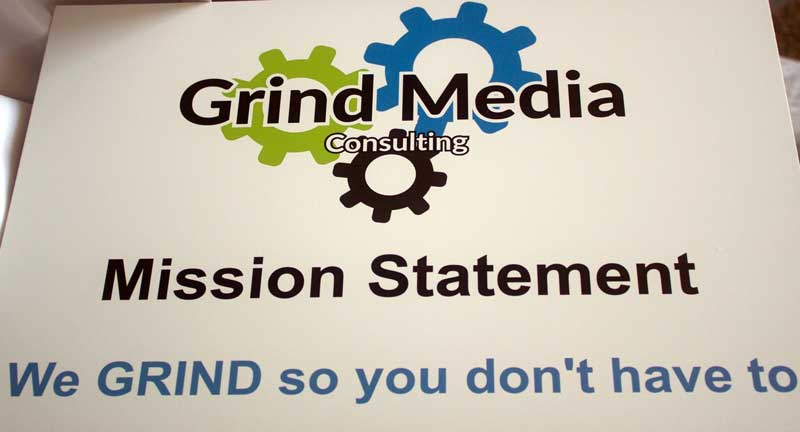 Jon Johnson Photo/Gila Valley Central: The sales pitch was good but, unfortunately, the follow through was not.

The story is not unusual as a number of businesses have come forward saying they had been taken advantage. When Gila Valley Central attempted to call Cornelius’ phone number listed on his business cards an automated response replied the number has “calling restrictions that has prevented the completion of your call.”(sic)

An attempt was then made to visit Cornelius in person by going to a residence south of Safford which is listed as his address with business filings. However, the occupant informed Gila Valley Central that Cornelius and his wife had actually previously moved out of the house to one in the city and that she was renting the residence from them. She also added that multiple other people had come looking for Cornelius at the residence, but that he and his wife had moved back to Michigan where he is originally from. 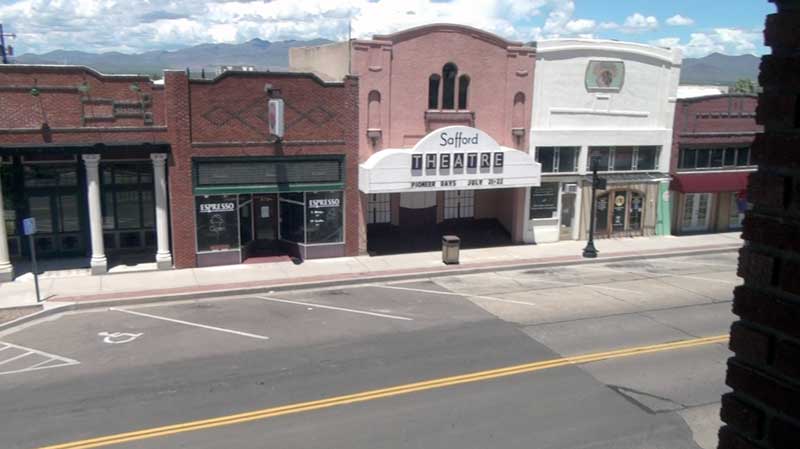 Rhinehart said she felt she had done her due diligence by checking out other websites the company had made and other checks, and that now her business partners are looking at taking legal action to compensate for Grind Media taking their payment and not performing any of the promised work. However, it appears she will have to get in line.

Brainstorms Virtual Reality at 214 7th St. also made a deal with Cornelius to trade services. Co-owner Steve Hunt said he traded a rental of his business to allow Grind Media to have a party and play the virtual reality games for a few of hours in trade for a variety of commercial and social media services. Grind Media did take a video of the business, but only posted it on Facebook.

“They split the video up into little sections and kept throwing it on Facebook and we didn’t need anything on Facebook, we already had that covered,” Hunt said. “They were supposed to cover all these other things and if it happened we never saw hide nor hair of it . . . We wanted to get a copy of that video that they made and put a voice over it so we could do some advertisement with the theaters and they’ve never returned calls since then. Last I heard, they weren’t even around.” 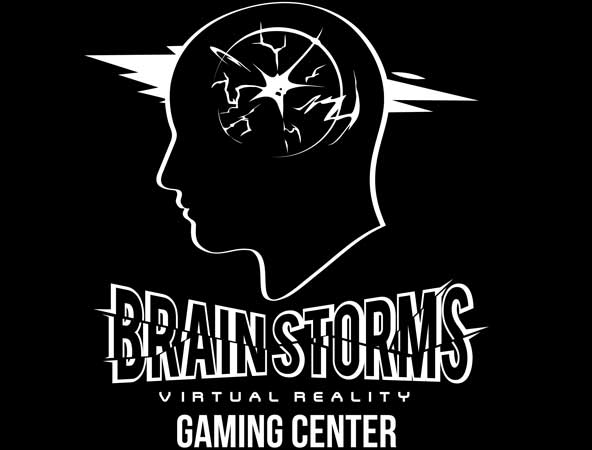 Brainstorms Virtual Reality is one of many unsatisfied customers.

The same tale is told again and again by a number of businesses and “clients” who didn’t wish to be named in this article. Apparently, the grift stretched past not providing services as contractually deemed but also in fleecing those who did services for the business, including a sign maker who has attempted to serve Cornelius with legal papers to no avail.

Charmaine Chidester, a business counselor for the Small Business Development Center at Eastern Arizona College, said an advantage of living in a close-knit community like the Gila Valley is being able to support other small business owners but that blind trust is never a good way to start a business relationship.

“If someone you do not know comes to your business to sell something, you should never sign a contract or purchase an item without doing some homework first,” Chidester said. “This is especially true if the visit was unsolicited or high pressure. Let the salesman leave their information then do a Google search. Most all established businesses have some kind of internet presence where contact information and client reviews are available. This is only the first step because a simple online listing should not be the only thing that validates the business . . . Anyone can throw up a quick web page and Facebook page, but look to see how long the company has been operating and the quality of completed work. A little bit of time can save you a lot of money.”

A good number of people Gila Valley Central spoke with said they thought the business was a good idea and they were disappointed it didn’t pan out. However, even they had to admit that scamming people, whether willingly or not, and then taking off and fleeing town was not the way to handle the situation.