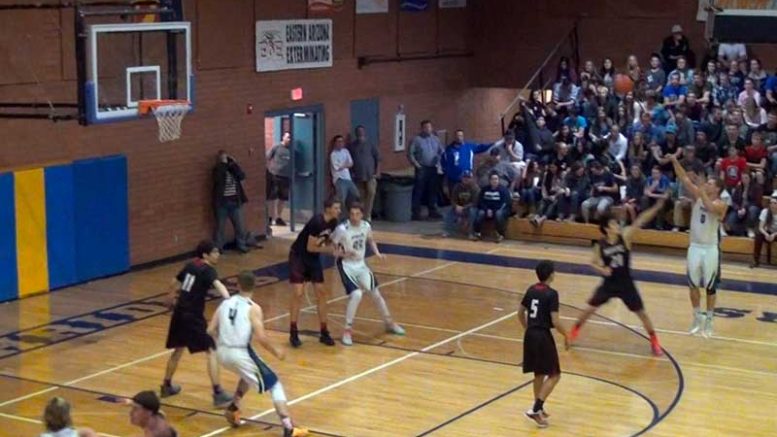 SCOTTSDALE – The Pima Roughriders (19-2 overall, 8-0 region) utilized its lockdown defense Wednesday night to hold the Scottsdale Christian Eagles (10-7 overall, 5-0 region) scoreless in the final three minutes of a highly-contested game and came back from being down 8 to win, 57-56.

The Roughriders went into Scottsdale Christian Academy as the number-one seed and dispatched its potential playoff contender to remain unbeaten in 2A play this year.

“We threw a couple of different presses at them and some trapping defenses and we caused some turnovers down the stretch,” said Pima head coach Cliff Thompson. “We finished on a 9-0 run, but what I’m proud of is that we stuck together. You’re down eight points with three minutes to go on the road and it’s easy to just roll over and lose the game, but we stuck together and found a way to pull it out.”

Thompson said while his team didn’t play its best game, he was proud how each player who got on the court contributed and gutted out the victory. He also added that playing last year’s 3A state champion at their house will help his team grow, much like it did after Pima beat last year’s 5A state champion, San Carlos, on the road. Both teams are now in the same division as Pima this year.

“We’re just really happy to be able to come and play a really good team in a hostile environment,” Thompson said. “It was really fun . . . We’ll hopefully learn a lot from this game and become a better team because of it.”

Pima drew first blood with Jarrett Kartchner hitting his first shot, but Scottsdale came back with a 3-pointer to start a back-and-forth game with numerous lead changes. Kartcher led Pima in scoring with 17 for the game.

Alek Pruszynski hit a 3-pointer to put Pima up 10-5, but Scottsdale went on a run to tie it at 10-10, which was the second of seven ties throughout the game. Scottsdale’s 6’8” sophomore forward Ethan Spry then hit back-to-back jumpers to give the Eagles a 17-14 lead after one period of play.

The lead didn’t last long, however, as Alek Pruszynski hit a 3-pointer to tie the game at 17-17.

Alek’s brother, Dawson Pruszynski then made his presence known down low. With Pima trailing 19-21, Dawson muscled his way up for the basket and the foul. Dawson hit his free throw to put Pima back up, 22-21, and Alek followed with a baseline jumper to extend the lead to 24-21.

Shortly afterward, Spry was called for his third foul with about 4:02 left in the second period and had to sit for the rest of the half. The teams continued to go back-and-forth at each other, however, and the score was tied, 30-30, at halftime.

At the start of the third period with Spry on the bench, Pima started bullying its way down low with Jarrett Kartchner and Dawson Pruszynski having their way, which led to a 35-30 lead. Spry then re-entered the game and, after teammate Tanner Hoffman hit a jumper, gave Scottsdale the lead by hitting two jump shots in a row. Spry finished the game with 12 points.

Jarrett Kartcher came right back with a rebound and put back over Spry to regain the lead, 37-36, and then, while down 37-39, Kartchner drew Spry’s fourth foul while hitting the bucket. His free throw was no good, however, and the game was tied again, 39-39.

Alek Pruzynski hit his third 3-pointer shortly thereafter, and Pima went up 44-43 after Tre Thompson went coast-to-coast to end the scoring in the third period.

With the game tied 46-46, Hoffman went off for Scottsdale and hit three shots in a row. Point guard Jacob Kaites added a fast-break layup and with about 3:02 to play in the game, Scottsdale had its largest lead of the night, up 56-48.

The tide then turned for Pima as Jarrett Kartchner and Alek Pruzynski hit back-to-back shots and Hoffman, who finished with a game-high 19 points, missed for the first time of the night. Alek finished right behind Jarrett for the scoring lead in the contest and finished with 15 points.

Dawson Pruszynski scored down low for his 13th point of the night to bring Pima within two, 54-56, with just 51.1 seconds left in the game.

Jarrett Kartchner then poked away the ball and it went off Scottsdale. Tre Thompson then hit his biggest shot of the night as his 3-ball tickled the the net to put Pima up, 57-56, with just 21.8 seconds to play.

Scottsdale tried to get the ball into its big man, Spry, but Kartchner poked the ball away and stole it. With 10.2 seconds left, Pima had the ball and the lead.

Thompson was fouled shortly after the ball was inbounded, but it was just Scottsdale’s fourth team foul, so Pima took the ball out of bounds again. This time, however, Kaites stole the inbound pass and was fouled by Thompson.

On the ensuing inbounds play, Thompson then intentionally fouled since Pima had fouls to give. Unfortunately, the foul came too quick, and Scottsdale still had 4 seconds on the clock and one more attempt at victory.

Sophomore guard Reed Meyers’ floater at the buzzer was no good, however, and Pima escaped Scottsdale with the win, 57-56, and its perfect streak against 2A teams intact.

“We were able to do what we needed to do to win the game, and I think that’s good experience for when you get in that situation again,” Thompson said. “These next three weeks, we’re just going to try and tighten things up and get better and, hopefully, we’re peaking at the right time.”

In other Gila Valley basketball action

The Thatcher Eagles (14-7 overall, 5-2 region) traveled up to Lakeside to play the 3A East powerhouse Blue Ridge Yellowjackets (19-4 overall, 5-0). The Eagles stuck close, down just two points near the end of the game, 71-69. However, the Yellowjackets hit their free throws to put away the Eagles, 77-71.

Thatcher will head to Benson on Friday at 7 p.m. to lick their wounds against the hapless Benson Bobcats (0-17 overall, 0-7 region), which Thatcher beat last week, 72-41.