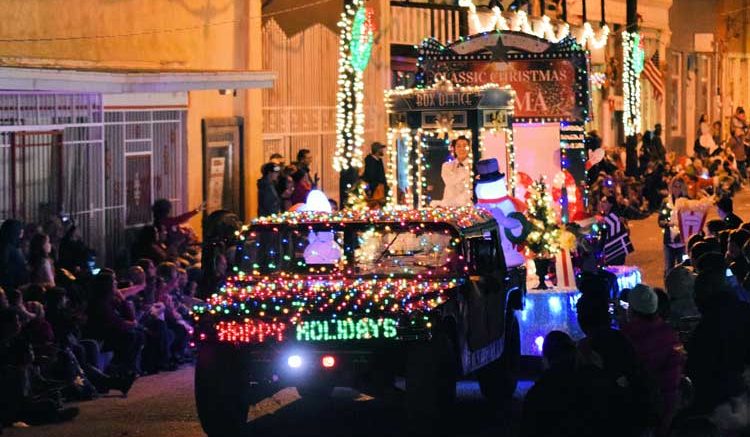 Photo By Raymundo Frasquillo: A record-setting crowd was on hand to witness the 20 entries of the 2017 Festival of Lights in Clifton on Dec. 2. Most followed the theme of "A Classic Christmas Cinema."

CLIFTON – Was there a thousand people in attendance? Even that may be an underestimate of those attending the 21st Annual Clifton Festival of Lights on Dec. 2. How does one justify that estimate? For one thing, the number of vehicles packed into parking lots and along the highway was one indication. 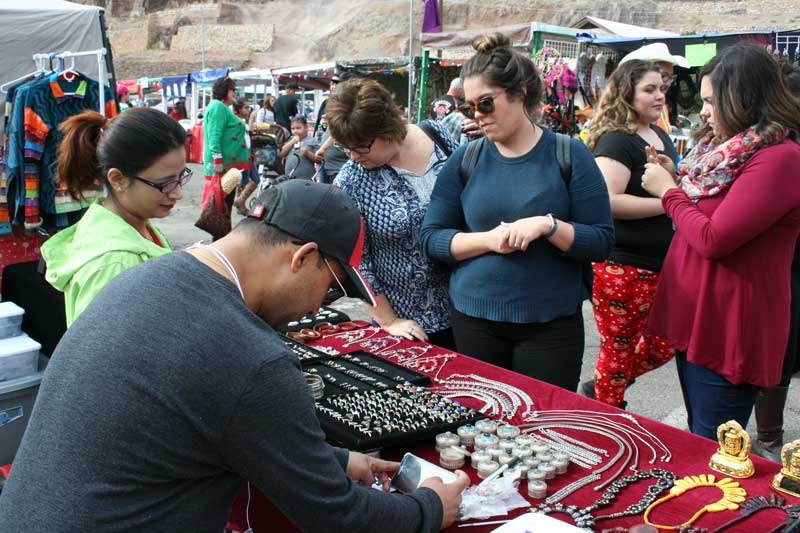 Photo By Gualterio Casias: Sydhir Newa, left, and Bijaya Shrestha, of Morenci, tend to customers who eye the beautiful jewelry and other items at their vendor table during the 2017 Clifton Festival of Lights. Man of the items originated in Nepal. There was a wide variety of rings, bracelets, and necklaces, along with clothing. Many of their wares were of Hindu influence. For instance, there were unique necklaces made of yak bone and bracelets made of beautiful stone.

There has never been the large numbers of vehicles parked in the area around Chase Creek St. where the 2017 festival was held. Add to that the crowd that the swarmed the festival to those who have attended, observed or reported on the event over the years it was quite evident it was a record crowd. 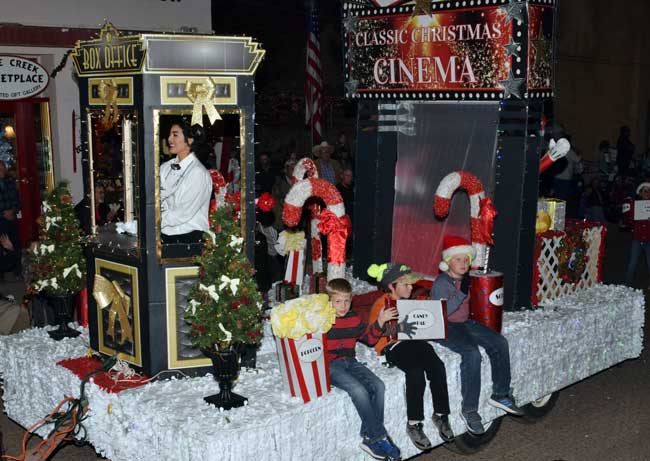 Photo By Raymundo Frasquillo: Most of the floats followed the theme.

The creativity of floats in the Parade of Lights was quite evident and held close to the parade’s theme of “A Classic Christmas Cinema. 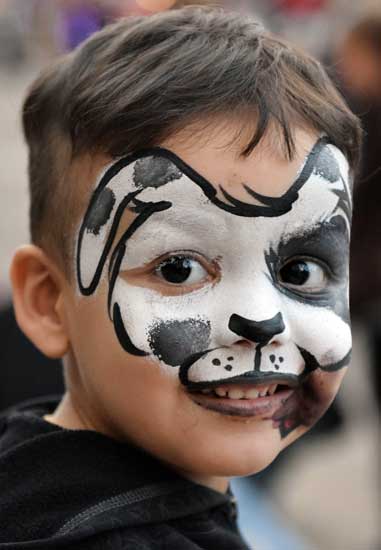 Photo By Raymundo Frasquillo: Dylan Morales, 3, Clifton sports a bunny on his face at the 21st annual Festival of Lights in Clifton held Dec. 2.

There were children,  parents, teenagers, grandparents, and great-grandparents along with the many who came from out of town. They ranged from babies and toddlers in carriages to retirees who worked at the local copper mine.

Yet another key factor was the variety and quality of food sold by vendors. Every food both did a brisk business. There were no complaints about what was offered.

The crowd enjoyed all-local music in the afternoon. Bella Campbell and mom Teresa initially sang Christmas and other holiday tunes with mom Teresa. They drew cheers from the audience. When Bella sang solo people not only clapped and cheered, but several in the crowd said they were “amazed” at by Bella’s talent.

“She was awesome. I mean she has a beautiful, beautiful voice,” said Clifton resident Shirley Randall, who at the same time was very busy selling cups of hot chocolate at the Greenlee County Democratic Party’s booth. 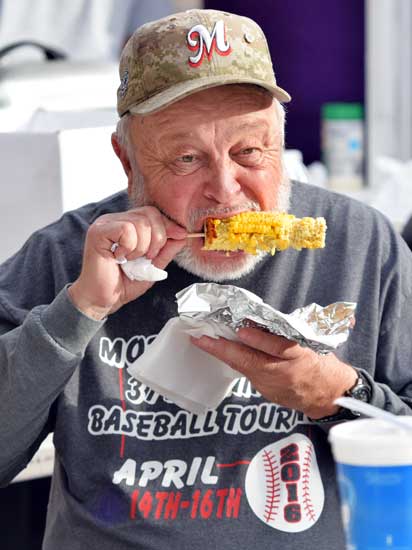 Photo By Raymundo Frasquillo: Roy Stacy munches down on a corn cob sold at the 2017 Festival of Lights on historic Chase Creek in Clifton on Dec. 2

Girl Scouts Troop 1573, led by choir director Melissa Lamoree, maintained the strong holiday spirit of the event with a variety of Christmas songs.

The Black Hills Canyon Band played its traditional brand of country/folk/rock ‘n roll with guitar solos and vocals that “rocked the canyon” according to one onlooker. That is a reference to Chase Creek Canyon in which the festival was held. Among the band members was Clifton Town Manager Ian McCaughey.

Clifton Town Clerk Espie Castaneda, who has been a member of the festival organizing committee since its inception in 1996, said she felt the hospitable weather was a definite factor in the record turnout. “That and all the many vendors, activities and music were definite factors in the festival’s success,” she said.

Castaneda added, “This year’s parade was the best. (It’s a) sign that small town America is still alive, with both elaborate and simple hand-decorated local floats, trucks, bicycles and even folks walking, like the great American Legion Post 28 Color Guard and Morenci Marching Band. Hundreds of folks, especially children lining both sides of the street–so many, you saw people raising their cameras high to take pictures. 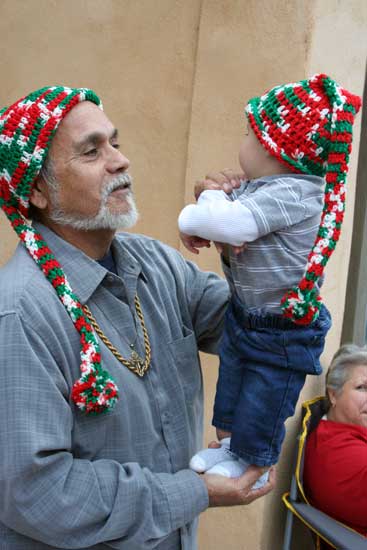 Photo By Gualterio Casias: Patrick Provencio, Sr., of Clifton, gives a loving look to great-grandson A.J. Abeyta at the 2017 Clifton Festival of Lights on Dec. 2. Family unity was a big part of the 21st annual Festival of Lights.

“I thought back on the dark days of the early and mid- ’80s and couldn’t believe this was little old Clifton, so bright and colorful and twinkling, brimming with local pride, showing off its history on historic, narrow Chase Creek. It was really moving to me. That old song of those dark days, “Clifton will rise again” – it has really come to pass.”

She emphasized local participation was a key to the festival’s success. That included the fact that most vendors were local civic organizations and individuals. The same with activities such as Girl Scout Troop 235 which held a traditional cakewalk. Leader Julie Sterr led the fun. Some adults, such as Clifton Town Councilor Barbara Reyes, got in on the fun.

McGaughey lauded the many participants and celebrants for making the festival “a very grand time. It was part of the beauty of living in a small town. There was a lot of spirit and that included anybody and everybody involved.”

He lauded “those behind the scenes” who made the festival possible. “The town Public Works crew did a tremendous job in setting up the booths, the stage and taking care of all the many seemingly small but important details. They made performed many important tasks such as making sure trash cans were emptied as they became full. Those who were on Chase Creek Street the Sunday morning may have noticed that the street was completely clean. There was not a single empty water bottle or scrap of paper to be seen. A lot of the guys were not on the clock and volunteered their own time to make sure everything went as it should. We’re very grateful to them. Hey, we’re grateful to everybody who participated, from the vendors to celebrants. That certainly includes electrician Bill Inman. Access to electricity for booths and the music stage were very, very important and Bill did his usual outstanding job in making sure everybody was taken care of.”

During the Parade of Lights, sidewalks were jam-packed with spectators standing or sitting three deep along the parade route. There were people crowded in farther along the street than in any of the previous years.

Photo By Raymundo Frasquillo: The Black Hills Band was one of the musical highlights, and there were several, of the 2017 Festival of Lights held De. 2 on historic Chase Creek in Clifton. It was the 21st annual festival. At far left is Clifton Town manager Ian McGaughey.

There were many oohs and ahhs and cheers as each float slowly passed. As the crowd dispersed following the parade there were several comments heard about how all of the floats were “very, very beautiful’ and “so creative.”

Winners were selected for 11 categories. The award-winning Morenci High School Marching Band received the Best Use of Music award. The band and the festival have a long history as the band has participated all but a couple of Parade of Lights. Valley Telecom was honored for its Best Use of Theme. Its float featured cut-out characters from the many classic Christmas movies it has shown over the years. They included Charlie Brown, the Muppet Grinch and the hapless boy dressed in a pink rabbit suit in the film “A Christmas Story.”

The town of Clifton was awarded Best of Parade. It featured a box office with a young lady posed to sell tickets to a movie. The float was quite elaborate and was put together by town staff.

By the way, Rene Morales was the winner of the “Ugly Sweater” contest. There was plenty of competition for that honor.

Finally, one of the most prized activities involved a drawing for $500 cash. George Reyes, the winner, walked away with plenty of spending money for the holidays.