SAFFORD – The Safford Bulldogs improved to 2-0 on the season and still haven’t given up a point as they beat the visiting Sahuarita Mustangs on Friday, 38-0.

The Bulldogs’ defense bent but it didn’t break, and the Mustangs showed some rust in their first game as they shot themselves in the foot several times after reaching the red zone on five occasions but having zero points to show for it. On Sahuarita’s nine possessions, the Mustangs punted four times, lost two fumbles, had two interceptions and turned the ball over on downs.

“I think it’s just more of an attitude the kids are playing with now,” head coach Michael Alba said. “(We) teach swarm and punish and they get to the ball very well. We’re just excited about the effort and intensity more than scheme because you can give them any scheme but if they give effort and intensity they’re giving a lot there.”

Jon Johnson Photo/Gila Valley Central: The Bulldogs moved to 2-0 and have yet to surrender a point on defense.

After Sahuarita had a quick four and out to start the game and a horrid 11-yard punt, Safford took over on its first possession and took advantage of the good field position by methodically running the ball. The Bulldogs then scored first blood with a beautifully thrown deep post from Mason Duros to the outstretched arms of Cameron Abril for a 31-yard touchdown. Despite being double-teamed most of the night, Abril finished with 4 catches for 78 yards and his touchdown. Abril also serves as the Bulldogs’ kicker, and went a perfect 5-5 on extra points and hit a field goal late in the fourth quarter.

Sahuarita threatened to tie in the second, but a series of penalties pushed them back to fourth down and 50. That is not a typo, they needed 50 yards to get the first down. The Mustangs had four false starts on their first three possessions as well as multiple penalties on their big third possession.

The Bulldogs muffed the punt return, however, and the Mustangs got a do-over from where they started before all the penalties pushed them back. It was for not, however, as on second and goal from the 7 the handoff was mishandled and the Bulldogs recovered the fumble for the first of four turnovers on the night by the Mustangs.

The game then turned into the Manuel Aparicio show as he tore off run after run through the Mustang defense, scoring twice in the second quarter on a 14-yard run and a 10-yard run. Aparicio, who was chosen as Gila Valley Central’s Player of the Game, ended up with 169 yards on 21 carries for three touchdowns, went 2-6 for 54 yards in the air and had seven tackles, including two quarterback sacks. 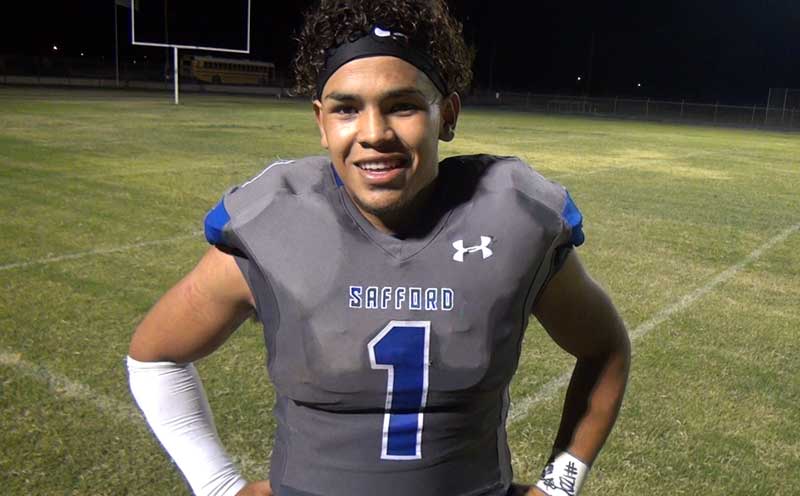 “Once all my lineman just looked me in the eye, they knew it was like ‘let’s get it on’ and all I had to tell them was just get off the start and push them before they push you,” Aparicio said.

The triple threat for Safford also has personal inspiration when on the field in the form of his sister, Isabel Aparicio, who died after suffering an automobile crash March 10. She was only 20.

Manuel has a tattoo on his arm memorializing his sister, and after each touchdown, he points to it and up to the heavens above. 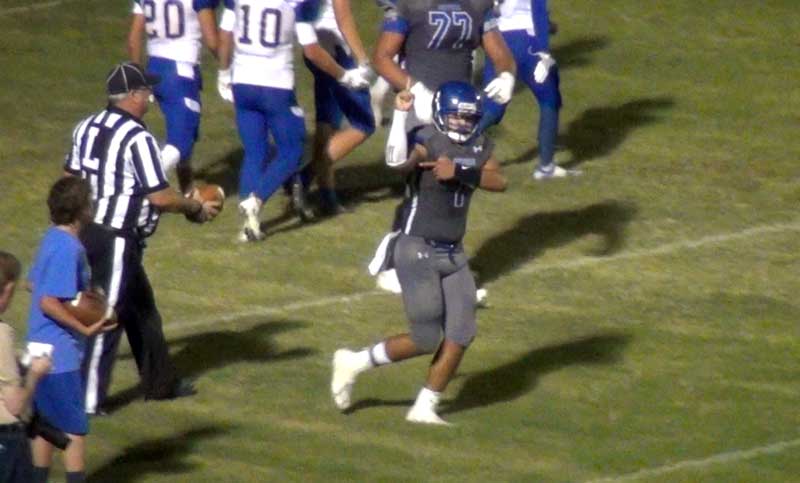 Jon Johnson Photo/Gila Valley Central: Manuel Aparicio points to his tattoo and to the heavens above in remembrance of his sister.

“I know that my sister is looking down on me on every play,” Manuel said.

After a roughing the kicker call bailed out Sahuarita on fourth and long from its own end zone, the Mustangs had perhaps their best play of the night on a pitch and catch from quarterback Daniel Valdez to Joshua Reyes.

Once again the Safford defense stepped up, however, and Jerick Arbizo intercepted Valdez. The Bulldogs capitalized on the turnover when Aparicio waltzed in from 5 yards out for his third touchdown of the night.

The biggest threat to the Bulldog’s goose egg came late in the third and at the beginning of the fourth when Sahuarita had second and goal at the 1-yard line.

The defense held its goal line stand, however, and time after time the Mustang running backs were stifled at the line or pushed back. On third and inches, JoPaul Arbizo burst through the line to drop Mustang running back Tucker Leinen for a loss. Aparicio then finished the defensive stand by not falling for a fake handoff dive and throttled Valdez to the ground as he attempted a bootleg to the right.

Safford’s young group of running backs then put the nail in the coffin as sophomore Robert White peeled off a 33-yard run and freshman C.J. Scrivner finished the drive with a 31-yard TD around the right side. Scrivner finished the game with 41 yards on 6 carries and his touchdown, and White nearly averaged 10 yards a touch, going for 38 yards on just 4 carries.