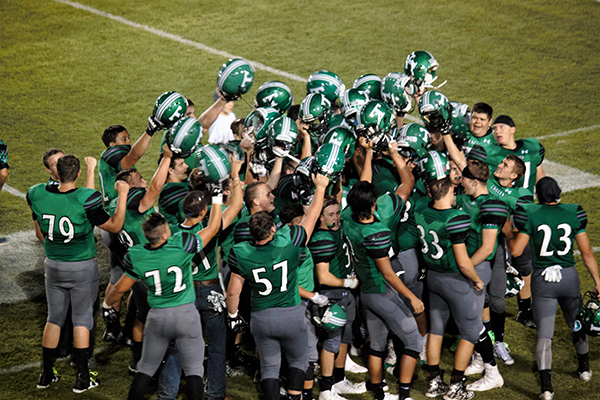 Safford and Thatcher were both on the road Friday night and both teams enjoyed the ride home after winning big over Coolidge and St. Johns, respectively.

Thatcher’s Jake Dunlap intercepted St. Johns’ quarterback John Robertson’s first pass of the night and the Eagles never looked back, winning 50-8. The Eagles made a good case to finish at the top of the 2A East after dstroying two of the top three competitors in successive weeks.

“We came out really hard this week, and the boys played really well,” Thatcher Head Coach Sean Hinton said. “We fixed a few mistakes and we kind of came out with a chip on our shoulder (because) we got picked to lose once again this week.”

After converted tight-end now running back Nate Lee broke off a 17-yard rumble down to the 1 yard line, Dunlap took it in from there on the next play and opened up the scoring on the night. Dunlap finished a perfect 4-4 passing for 56 yards and two rushing touchdowns for the game.

The Redskins converted a couple of short fourth downs on their next possession, but their drive again ended with an interception as Thatcher’s Aric Peterson plucked the ball out of the air and took it to Thatcher’s 40 yard line.

After Shane Cook turned a 5-yard pass from Dunlap into a 28-yard gain, Lee answered the call and gained 34 yards on the drive to set the Eagles back up to score again. Dunlap then waltzed his way in from the 3 yard line for his second TD, and Thatcher was up 14-0 after the 2-point conversion.

Tyler Roebuck then had a nice 25-yard punt return and Lee thanked him for the good field position by bursting untouched through the middle for a 39-yard TD. Lee would finish the night with 118 yards on 11 carries but did leave the game for a short while in the second quarter after getting hit in his calf on defense.

Lee got his chance at running back as Thatcher looked to fill the void after Kaleb Mattice blew out his knee in the first game of the season. Lee started in earnest last week and hasn’t slowed down.

“If we would have found Nate Lee a little bit sooner, we would have been able to beat Snowflake by a few touchdowns I think,” Hinton said. “We sure like Nate; he’s a big, physical back and we like to think of ourselves as a power-running team. His style of running really complements our offensive line and what we want to do.”

After another Redskins punt, Thatcher drove the ball down the field successfully and capped it off with a 4-yard TD run by Brandon Hayes to go up 28-0.

Thatcher wasn’t finished however, and its defense answered the call again as Dallin Cook gathered Robertson’s third interception of the half and took it back 32 yards for a pick 6 with just 15 seconds left in the half. Thatcher went into the locker room smiling, up 35-0.

The Eagles opened the second half just like the first and Trevin Clark capped of their drive with a 19-yard TD run. That put the Eagles up 42-0 and instituted the running clock mercy rule.

With 2.25 left in the third, the Redskins finally forced an Eagles punt and managed to put together a sustained drive for the first time of the night. Scoreless through three quarters, St. Johns got on the board with a 2-yard TD run by Trent Sherwood with 9:42 left in the game. The 2-point conversion made it 42-8, Thatcher.

“That one put a smile on our face for sure,” Hinton said. “We came out hard and put a country-boy butt whooping on them.”

Thatcher has a bye next week and then will travel to Eager on Oct. 14 to take on Round Valley (5-0 overall, 1-0 section) for what could ultimately be the 2A East crown. Round Valley dispatched Miami (3-4 overall, 0-2 section) 62-18 on Friday night.

“It’s nice to come in and get a win after the stretch we’ve had,” Safford head coach Mike Alba said. “We played a very tough early schedule out of conference. We were hoping for a better start but this was nice to get this win in our section.”

Safford scored early and often on its way to a 42-14 halftime lead, and Alba described the game as his team’s best all-around effort.

“Our kids came out aggressive from start to finish,” Alba said.