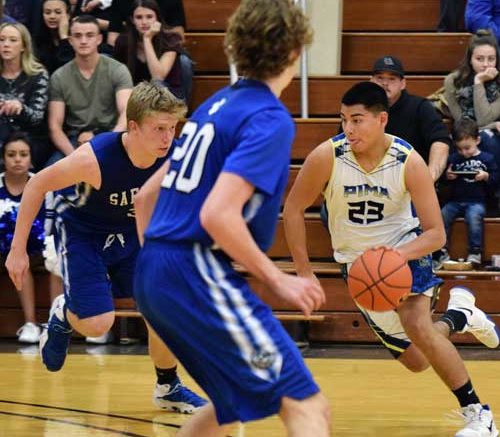 Photo By Raymundo Frasquillo: Frank Gutierrez has the number and the tongue wag to pair with him splitting the defenders like Michael Jordan, but the Safford Bulldogs were victorious in the 55th annual EAC Holiday Tournament Championship, 58-50.

Bulldogs bump off Roughriders in upset

Safford’s boys team joined its girls team as tournament champions by handing Pima (6-0 conference, 12-2 overall) its only loss to an Arizona team so far this year. 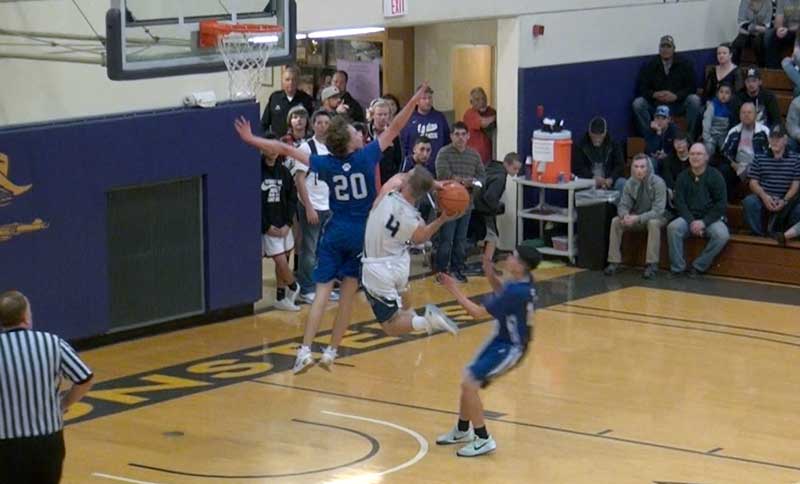 Jon Johnson Photo/Gila Valley Central: Safford’s Andrew Smith deters Pima’s Andrew Taylor from scoring at the end of the second period in the battle of the Andrews.

“We were honored to share a court with a team like that,” he said of Pima. “That’s a very well-coached and very good team. I’m proud of our boys for their effort tonight.” 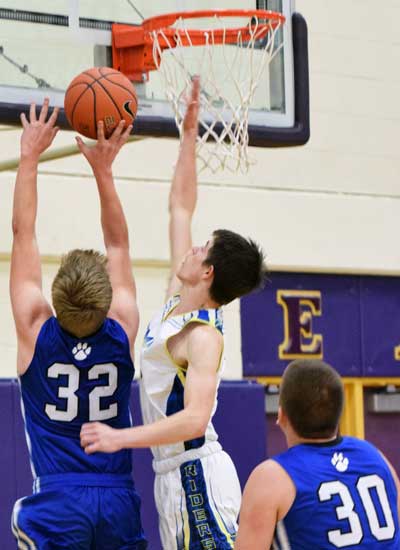 Photo By Raymundo Frasquillo: Pima’s Trey Thompson attempts to stop Safford’s Collin Thompson (32) from scoring in the battle of the Thompsons.

The game started out well for Pima, as it took a 10-4 opening period lead with on the backs of its two main stars, Trey Thompson and Dawson Pruszynski.

Safford fought back with eventual tournament MVP Drew Cochran showing his range by hitting inside and beyond the arc, and Andrew Smith filling in the lanes on the fast break as well as stroking it from deep. By the time the dust settled after the initial period, Safford had the lead, 14-13.

“We played hard, made sure to shut down and execute what we thought we needed to do,” Cochran said.

The second period was a defensive battle for both teams as Pima had a lone, 3-pointer by Frank Gutierrez in the left corner in the opening minute as its only field goal. The Bulldogs utilized a collapsing defense to double and even triple team Pruszynski in the paint, forcing the big man to pass it back out (rightfully so) to open perimeter players. The problem was the jump shots were missing their mark for the Roughriders, who uncharacteristically only had three made 3-pointers on the night. 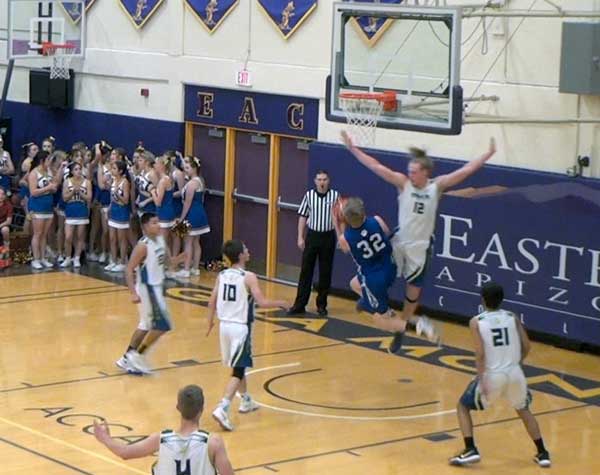 With jump shots clanging off the rim, Safford managed to capitalize a little by quickly moving the ball up court after gathering defensive rebounds. But it took a sleek 3-pointer to really make a difference as the Bulldogs went into half-time up just 5 points, 23-18.

Pima came out pressing in the third period, and after initially stifling the Bulldogs, Williams called a timeout to institute his press break. For the rest of the night, the Bulldogs continued to find open shots at the rim by successfully breaking the Roughriders’ press, which yielded some turnovers but not enough to make up the difference. 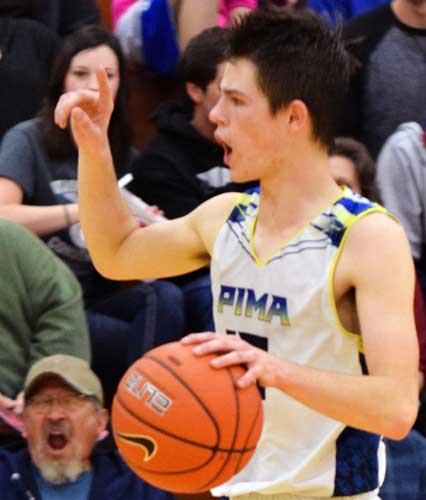 Photo By Raymundo Frasquillo: Trey Thompson calls out a play.

However, Trey Thompson came out like a man on a mission and scored 12 of his 19 points in the second half by breaking ankles as he continuously drove past those attempting to guard him and scored at the rim.

Pruszynski also perked up in the second half, scoring 14 of his team-high 20 points with his own inside/outside game and on fast breaks.

The problem is that while Pima started to score, the Bulldogs had the answer every time it got close with either a deep 3-point bucket by Smith, who finished with 11 points, or tough buckets by Cochran, who finished with a game-high 23 points.

While Pima’s two-man game of Trey Thompson and Dawson Pruszynski canceled out Safford’s two-man game of Andrew Smith and Drew Cochran, there was one intangible who made the difference in the game, and that player was Safford’s superb sophomore, Collin Thompson. 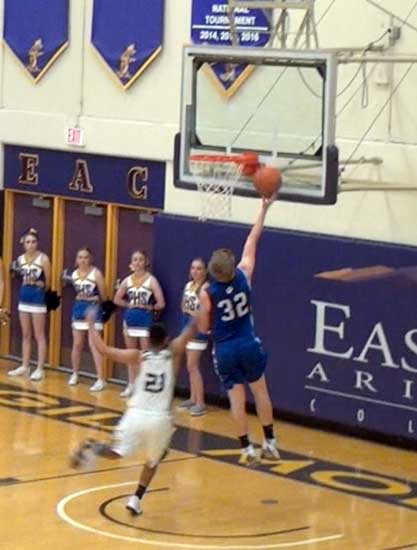 Jon Johnson Photo/Gila Valley Central: Collin Thompson takes it to the hole for 2 of his 15 points on the night.

Having to take on a tough defensive assignment most of the night guarding Trey Thompson, Collin also contributed greatly on the offensive side dishing assists to Cochran and others and taking tough shots in the paint up against Pruszynski, who also had quite the battle with Safford’s big man Stratton Baldwin to deal with. Both Pruzynski and Baldwin would foul out late in the fourth period.

Collin made his presence known throughout the game and had the shot of the night with a third-period buzzer-beating half-court swish that just escaped the hands of Pima’s Brayden Brown. After only gathering 3 points in the first half, Collin finished with 15 points on a well-rounded night.

After the third period had finished, Safford had increased its lead by 4 more points, 40-31. While the Pima faithful were nervous, they still had hopes of a fourth-period comeback victory. 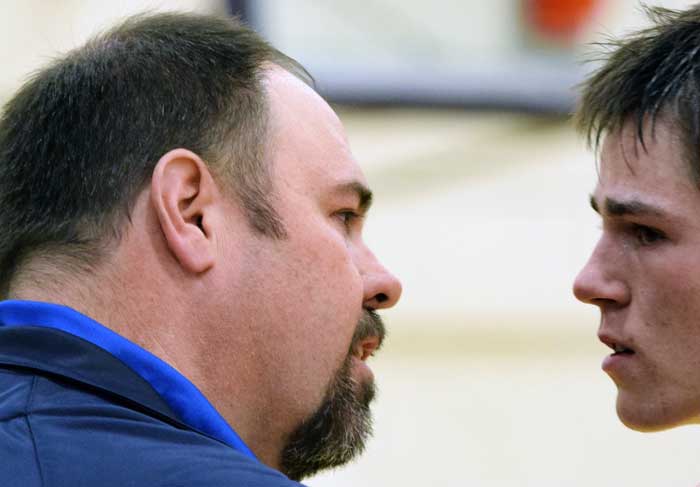 As it became evident that scenario wasn’t likely, frustrations ran high and after being called on a ticky-tack foul attempting a rebound on a teammate’s layup miss, Trey Thompson let the official know what he thought about the call by referring it akin to a certain bovine excretion. The outburst bought Trey a technical foul and a quick moment of reflection with his head coach and father, Cliff Thompson.

The teams battled throughout, and it was appreciated that Safford didn’t try to hold the ball and utilize stall tactics to shorten the game in the fourth with a considerable lead. That being said, high school basketball desperately still needs a shot clock.

A couple of streaking buckets by Pima’s Manuel Rivera cut the deficit to a respectable amount, and the Safford Bulldogs rejoiced with their well-earned championship win.

The two teams won’t tangle again until Jan. 25 when Pima will seek to take revenge on its home floor court.

“It’s not going to be as easy,” Cochran said. “We gotta work twice as hard. They’re going to come back harder.”(sic)