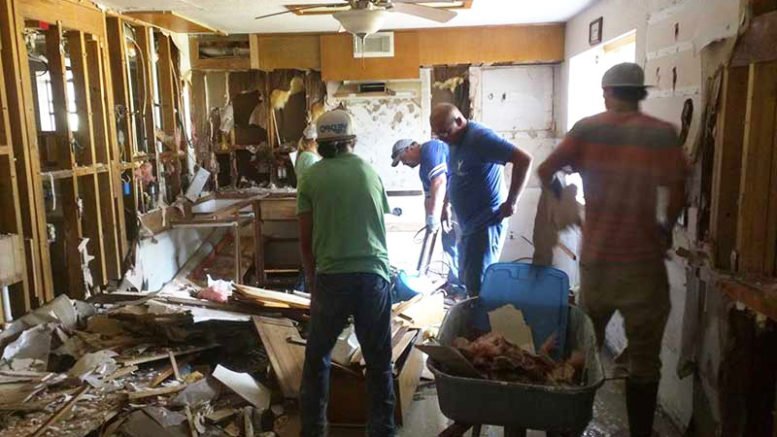 THATCHER – After cleaning, clearing, and drying up the flooded homes as well as delivering much-needed food and supplies, the Velocity Builders Team has returned after a long week of work helping hurricane victims in Texas. Here is what happened.

After hearing of the devastation of Hurricane Harvey, the Velocity Builder’s crew had an initial plan to head to Houston, Texas. But the flood waters had yet to recede and the demand for cleanup and restoration was likely months away. Instead, the team of Velocity Builders volunteered their time and traveled to Victoria, Texas and set up a work base camp. Volunteering in the neighboring areas of Port Lavaca and Rock Port, the crew was gone for roughly a week as they donated their construction and flood restoration services to the victims of Hurricane Harvey. 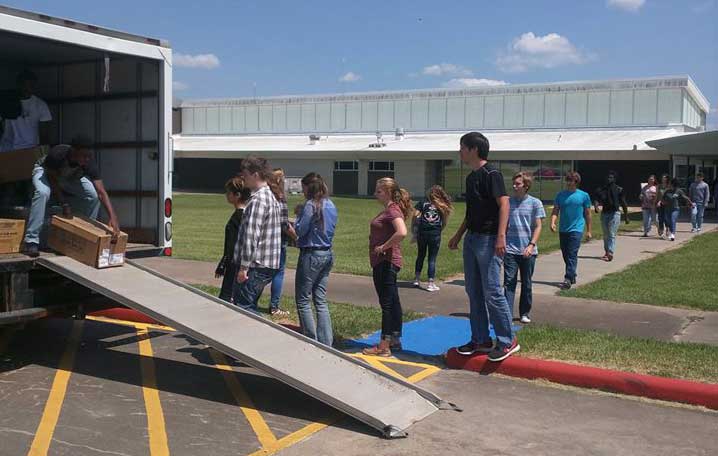 Contributed Photo/Courtesy Doug Gardner: Students line up to collect the supplies of food and sanitary needs to be sorted and distributed.

The Velocity team had enough equipment to set up drying machines in three houses at a time. Each house that the team worked on had active mold, including black mold. Aside from stripping and drying the interior of the homes, the Velocity teams delivered sanitary and food staples donated by the locals in the Gila Valley.

A box van filled with essentials was delivered to Sweeny High School. Sweeny is located in one of the areas hit hardest by Hurricane Harvey.  Donated supplies were also delivered to a Church of Jesus Christ of Latter-day Saints meeting house and a Baptist church in Lake Jackson.

Working within the community tirelessly performing 16-hour days for 12 days, the Velocity volunteer team mucked out and dried five homes.  The group worked specifically on the houses of the individuals who had walked away from their homes to help others,

“We would like to thank the community and especially our employees who volunteered to go,” Gardner said. “We definitely want to thank our employees that worked hard before and during the trip. Our office manager in here – with all the donations in here – she spent hours and hours and hours sorting and boxing and labeling. All the donations that came from the community that was both physical and monetary helped out with the trip, so we would like to thank the community.”