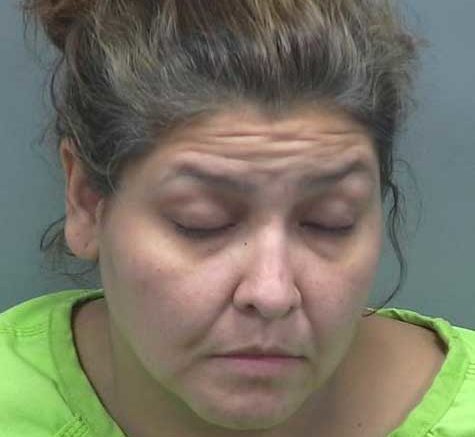 SAFFORD – On Wednesday night, authorities drove thru a parking lot of a local motel on 5th Street and noticed the dome light on in a vehicle with a man and woman sitting inside. The officer noticed that when the two saw the marked patrol vehicle, they seemed to move rapidly throwing items in the car and quickly knocked on a motel room door where someone inside let them in. The officer recognized the two people as local residents from  prior drug involvement, including drug sales. When the officer ran a check on the car he discovered that it was registered to another man living in Solomon. Using a flashlight, the officer noticed the couple was in such a hurry they left the keys on the seat, as well as a purse in clear view and the doors to the vehicle unlocked. Due to the situation and through much experience, authorities felt there was some type of criminal activity going on. The officer drove to the side of the motel and requested an additional officer to come to the area.

At about 9:00 pm, two men and two woman started to leave the room. The officer approached them asked them who the car belonged to. The woman who the officer had seen get out of the car earlier claimed it belonged to a “friend.” The other woman who claimed to be the renter of the motel room, later identified as Jamie Urrea, told authorities she had the phone number of the vehicle’s owner. The man and woman the officer had first seen in the parking lot were allowed to leave. Before they left, the officer found it odd that they retrieved their items out of the first vehicle, locked the doors and took the key with them as they left in a different car.

When the authorities asked Urrea if anyone else was in the room, she reported there was not, and allowed the officers to look for themselves. There wasn’t anybody else in the room,  but as the officers looked around, they noticed the floor was littered with torn drug packaging. There was some, foil, a butane torch with a refill bottle of butane on the table.

Officers noticed a black safe next to the nightstand, which is commonly used to store illegal items of drugs, weapons, or evidence of drug crimes. When asked who the safe belonged to Urrea reported that it was hers. When asked what was in the safe, she initially ignored the question and said that she was just traveling from Phoenix. When asked again, she reported there was nothing in the safe but told authorities she could not open it because she had left the key at home. As police were speaking with her, they noticed Urrea became very nervous and her body was shaking. She was asked if the safe was empty and she replied that it didn’t matter. She continued to say that she had done nothing wrong, but that she was not responsible for its contents.

After going back and forth about whose safe it was, she later told police the safe belonged to a male friend who asked her to keep it safe for him, but she did not know where he was or how to get a hold of him.  As Urrea continued speaking with police, she grabbed her cell phone. She was told to stay off her phone, and it was placed on the bed. Officers could see the phone had text messages on the screen, particularly one that inquired about getting a scale. Urrea was placed under arrest. Authorities asked her if she was going to cooperate, and she reported again that the safe was her male friend’s and she did not have a key. Urrea also reported at that time, there was a “weed” bong in the safe that was hers, but her friend had the key. The officer asked Urrea about other items that might be in the safe and if he had permission to open the safe. Urrea kept changing her mind and kept asking the officer what would happen if she didn’t cooperate. Urrea stated that she didn’t know what to do.

After more discussion, Urrea became emotional and began to cry. Officers allowed her time to compose herself and explained her options. She then told authorities again to open the safe. An officer retrieved a pry bar from his vehicle and used it to open the safe. Inside it contained two digital scales, a meth bong, and two bags of meth with a total field weight of about 35 grams. ( A gram of meth alone can yield about 200 usable doses.)

An officer stayed with Urrea as another one went to speak with the other male outside. He reported to the police that he came to visit Urrea because she knows his family. He denied owning any property in the motel room or having any knowledge of any illegal activity in the room. He gave permission to be searched and was allowed to leave.

The officer returned to speak with Urrea where she gave permission for police to look for any guns in the room but claimed the meth was for personal use. Through experience the officer recognized it was clearly not for personal use, but that it was for sale. While checking the room, the officer found the key to the safe as well as Urrea’s I.D. Urrea said she had picked up the meth in the Phoenix area.  Urrea was booked in the Graham County Jail for possession of dangerous drugs for sale, possession of drug paraphernalia, and use of an electronic communication device during a drug transaction.

Authorities impounded the vehicle and made contact with the owner. When he was told that it was in the Safford City Yard and that police believed that it contains illegal items, the man reported he had allowed a friend of Urrea’s to use his car. He then told the officer that a “repo” company was going to take his car any day. He was told a female had taken the keys to the car, but he did not seemed concerned. The owner of the car stated he did not have any other keys and when the officer asked his permission to search the vehicle, he responded that he would need to contact an attorney.