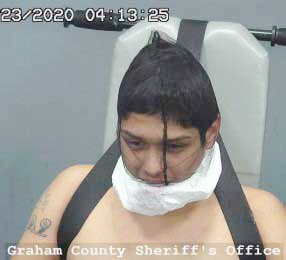 SAFFORD — What started as a citation for underage drinking turned into an arrest for aggravated assault on a police officer.

Safford Police observed a vehicle fail to stop at a stop sign and pull in front of a house at the intersection of Relation Street and 9th Avenue.

The passenger, identified as Richard Nathaniel Bencomo, was reported to be belligerent to the officer, but eventually admitted to drinking alcohol, despite his driver’s license showing him to be 19. Bencomo was cited allowed to call for a ride home.

As Bencomo was leaving, the officer could hear Bencomo fighting with the driver of the vehicle giving him a ride, so the officer followed. Bencomo exited the vehicle at 10th Avenue and 16th Street and threw something at the car. The officer attempted a stop but Bencomo reportedly started to run.

After another stop and start, and with the help of assisting officers, Bencomo was handcuffed. At that point, Bencomo started spitting at the officers, hitting one in the face.

While at the hospital to get medical clearance before being booked into jail, Bencomo allegedly threatened to kill everyone in the room, including medical staff.

Once medically cleared, Bencomo was fitted with a spit shield and booked into Graham County Jail on charges of disorderly conduct and aggravated assault on a police officer. He reportedly started banging his head on the holding cage before being transferred to jail personnel.

At the jail, a breathalyzer reportedly showed Bencomo with a blood alcohol content of .267.