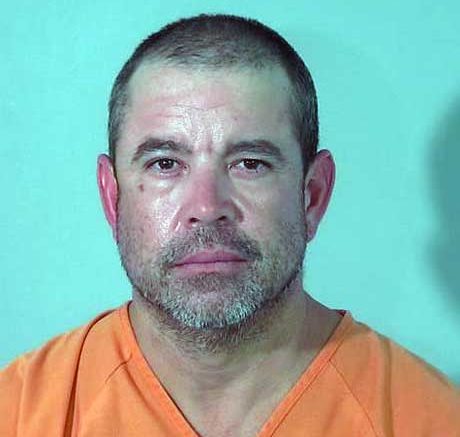 Contributed Photo/Courtesy GCSO: Abel Scott Peralta was booked into the jail on charges of assault and disorderly conduct.

SAFFORD – Abel Scott Peralta, 46, was booked into the Graham County Jail on Oct. 11 on charges of assault and disorderly conduct.

Peralta allegedly insulted the victim’s mother and then proceeded to assault the victim in the victim’s own residence. According to statements made to police, harassment from Peralta has been an ongoing problem for more than 1.5 years.

Officers were dispatched at about 10:37 p.m. to a residence on W. 9th Street regarding the assault. Upon arrival, officers interviewed the victim and several witnesses and were given an audio recording of the incident.

In the audio recording, a male voice said to be Peralta can be heard saying disparaging remarks about the victim and the victim’s mother. The voice then goes on to say, “I’ll (expletive deleted) you up.”

The victim said Peralta initially came across the alley unprovoked and started yelling and cursing at him. A third individual got in between the two men and pushed Peralta back onto his mother’s property.

Peralta was later located at a nearby apartment and was taken into custody. He allegedly said the victim had made disparaging remarks about his mother so, “I went over there and took care of it,” he said while punching his hand.

Peralta was then transported to the jail and booked on assault and disorderly conduct charges.

Woman booked into jail for assault with pruning shears