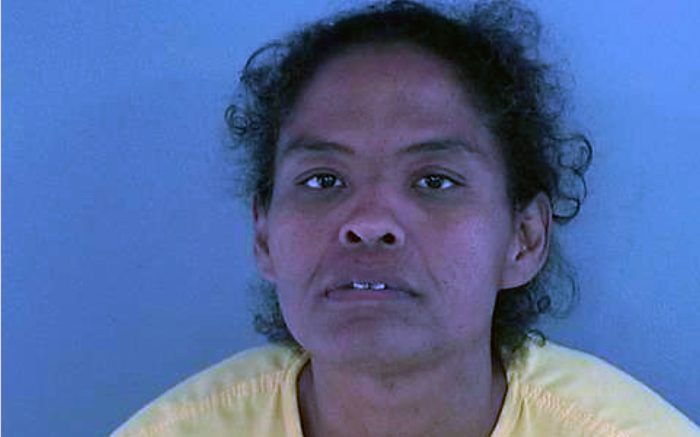 Contributed Photo/Courtesy GCSO: Evelyn Young was booked into jail Feb. 2 for her second assault in less than a month.

SAFFORD – A homeless woman was back in jail Feb. 2 after receiving her second assault charge in less than a month.

Evelyn Young, 42, was arrested and charged with assault and disorderly conduct after allegedly repeatedly kicking a man in his head as he was lying down on the ground.

Officers were dispatched at about 12:24 p.m. to an area near the Valley Motel at 1050 W. Thatcher Blvd. regarding a fight at a homeless camp.

According to several city of Safford workers who witnessed the attack, Young and another woman were seen assaulting the victim, who was lying on the ground. The second woman walked away from the scene prior to officers’ arrival and was not located.

The victim was found bleeding from his nose with fresh blood on his face and mustache. He advised he attempted to protect himself but was repeatedly kicked in his face.

Officers took Young into custody and noticed her right white tennis shoe had fresh blood splattered on it. She appeared to be intoxicated and refused to cooperate with the authorities, and instead yelled profanity and attempted to free herself, according to police reports.

The victim was transported by Lifeline Ambulance to Mt. Graham Regional Medical Center for treatment while Young was taken to the jail, where she was placed into a restraint chair due to her refusal to cooperate.

Last month, Young was charged with assault, disorderly conduct and criminal trespass in the third degree after she allegedly struck a male victim multiple times at Firth Park after he said she couldn’t sleep in his tent.

Young plead no contest to those charges Jan. 18 in Safford Municipal Court and was given a short jail sentence.