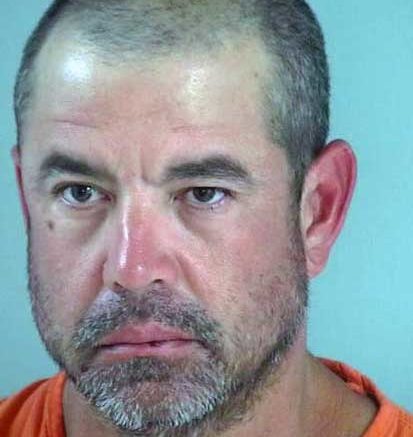 Contributed Photo/Courtesy GCSO: Abel Scott Peralta was arrested and booked into the jail on charges of reckless driving and possession of drug paraphernalia after fleeing from police May 25.

SAFFORD – You can run and you can hide from the long arm of the law in Safford, but sooner or later the officers seem to catch their suspect. On May 25, it was sooner rather than later, as a man who fled from police was apprehended near the Gila River after getting his vehicle stuck.

Abel Scott Peralta, 46, of Safford, was arrested and booked into the Graham County Jail on charges of reckless driving and possession of drug paraphernalia.

The chase began around 10:08 p.m. when a green Chevrolet Cobalt refused to yield to an officer after the Chevy ran a red light at the intersection of 14th Avenue and U.S. Highway 70, according to a Safford Police report.

The Cobalt, allegedly driven by Peralta, continued north across the highway onto the dirt road with the officer following. Due to poor visibility from thick dust spewed behind the Cobalt and the reckless nature of the driver’s actions, the officer shut off his emergency lights and backed off from the pursuit. The officer noted he later could see the Cobalt head eastbound on a farm road at a high rate of speed.

Unfortunately for Peralta, the police radios were functioning fine and backup units were staged at various spots to intercept him. Peralta attempted to avoid other units and ended up getting stuck in sand near the river bottom near the Eighth Avenue Bridge.

Peralta then fled on foot was was captured shortly thereafter. He told officers that he was just a passenger and that the driver had fled the area, but officers found no evidence of anyone other than Peralta was in the vehicle.

A metal marijuana pipe was found on Peralta and a glass pipe used to smoke methamphetamine was also located nearby the car. Peralta allegedly admitted to ownership of both items.

Nuttall’s Towing arrived at the scene and removed the vehicle, and Peralta was given a ride to jail, where he was booked on charges of reckless driving and possession of drug paraphernalia.