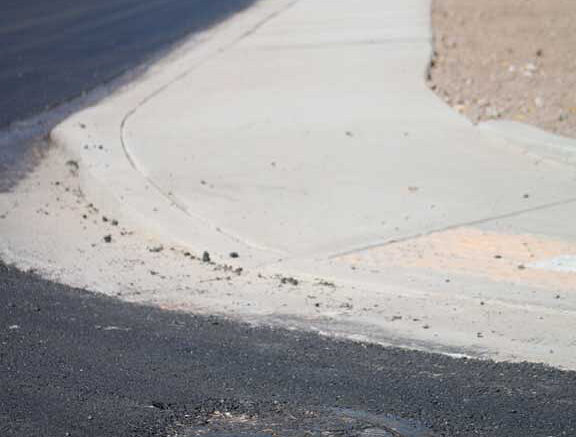 A manhole is covered by freshly-placed asphalt, an issue raised by the Safford City Councilk during discussion with the city's Public Works director. Other cerns about quality of work and safety were also raised. - David Bell Photo/Gila Valley Central

Led by Councilman Michael Andazola and echoed by Mayor Jason Kouts, staff was questioned about the quality of work performed by the contractor, Precision Asphalt and Paving LLC.

At issue is the quality of the concrete sidewalks, asphalt laid over other city assets, safety concerns and the impact to residents’ yards by the construction crew.

“I’m just asking if we can get this reconciled,” Andazola said. “I want to hear we’ve done a great job. I believe if the city’s going to put its name to this, we should be ‘fessing up to it.”

Lance Henrie, the city’s Public Works director, said the city is addressing these concerns with the contractor.

“This project isn’t complete; we’re not done with this project,” Henrie said. “We do have to go through and we have to give them a substantial completion letter with punch-list items. We’re not don; just because they’ve paved it, we’re not done.”

The work is the final phase of improvements to the east end of 8th Street, which included turning the street into a dead end before connecting with U.S. Highway 70, making significant changes to flood water drainage and working with the Safford Cotton Gin and neighboring farm to ensure that rain water runoff went into washes rather than homes.