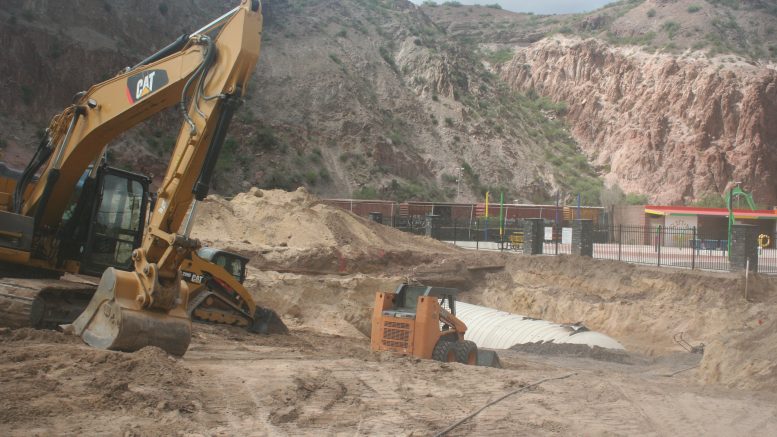 Photo By Walter Mares: A 25,000-gallon water recycling tank is installed to recycle water that drains from the Clifton splash pad to irrigate an adjacent soccer field. A majority of the money for the project was provided by Freeport-McMoRan, Inc. FMI also used its equipment to install the tank.

CLIFTON – There is something of a unique similarity between the town of Clifton’s soccer field and the Morenci High School football field that existed in Old Morenci. At the old MHS stadium, only one end of it could be used for field goal or extra point attempts. Using the other end of the field meant the football would roll down a steep mountainside.

Clifton’s new soccer field, which will open this spring, is located along the San Francisco River in Eastside. At one end of the field is a slag wall that is at the most three feet high and abuts the river. That involves a potential problem: soccer balls ending up in the river.

However, Clifton Town Manager Ian McGaughey said the town will install netting behind the goal closest to the river to keep balls from floating away.

McGaughey said, “We’ll put in the goals, a net to keep soccer balls out of the river and other amenities to make it a first-class facility.” He noted the field is already covered with grass except in a few spots. “We’ll work to make sure all of the field is grassy,” he said.

A particularly unique aspect of the project is that grass on the soccer field will remain green throughout spring and summer via recycled water that will come from drainage at the Clifton splash pad located adjacent to the soccer facility.

Splash pad water will drain into a 25,000-gallon underground steel tank installed by Freeport-McMoRan, Inc. last fall. The project was made possible, in part, by a $135,000 grant from the FMI Community Investment Foundation. The town also received  a $25,000 grant from Cenpatico, the behavioral health care coordinator for southern Arizona. 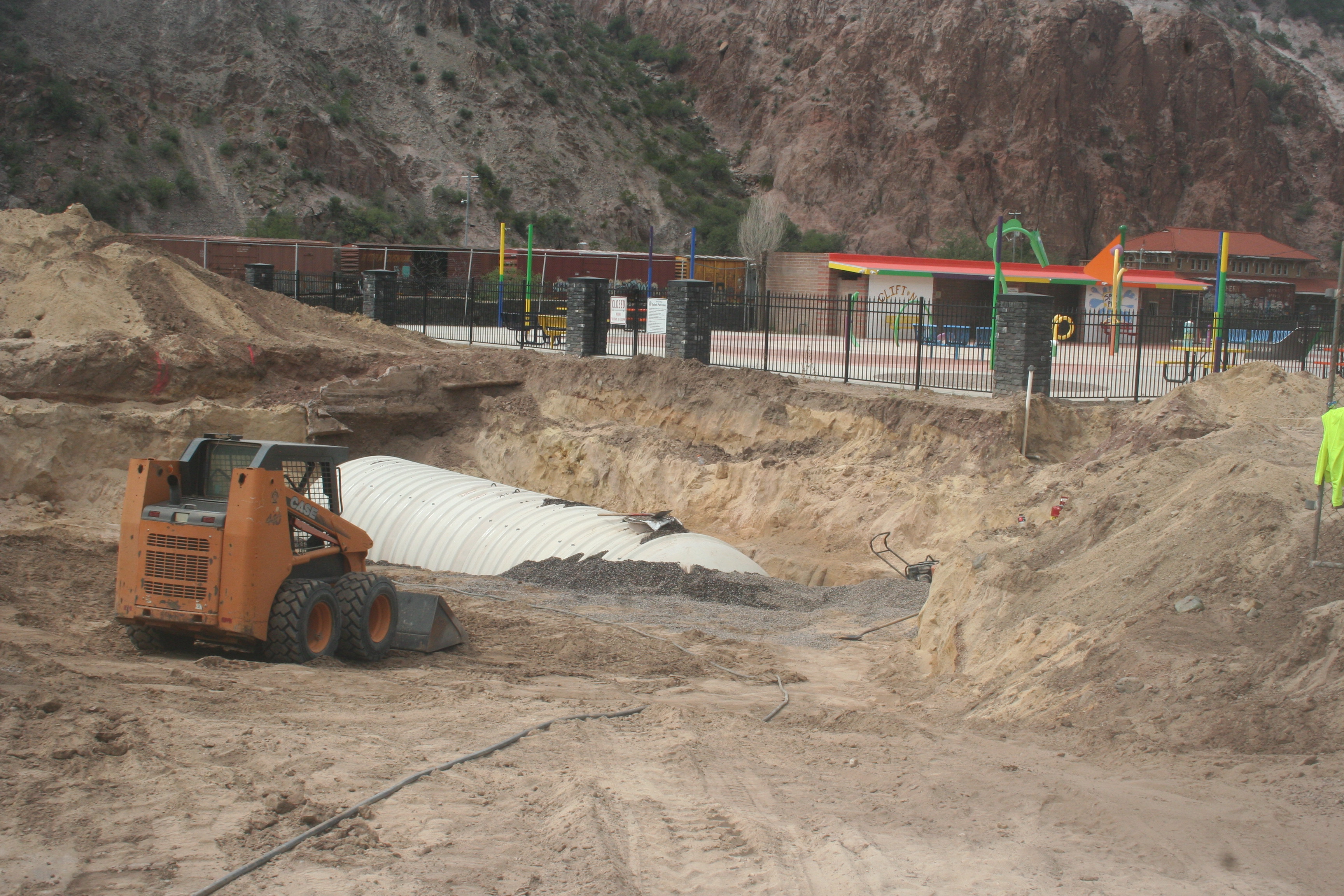 Photo By Walter Mares: A a 25,000-gallon underground steel tank was installed by Freeport-McMoRan, Inc. last fall. The tank will collect water from the splash pad for use on the soccer field.

Those passing through Eastside in September and October may have wondered what all the earth-moving equipment and large piles of dirt on the south side of the FMI guest house were all about. On the north side of the guest house, heavy equipment was digging a big hole in which to install the tank and its accompanying plumbing. 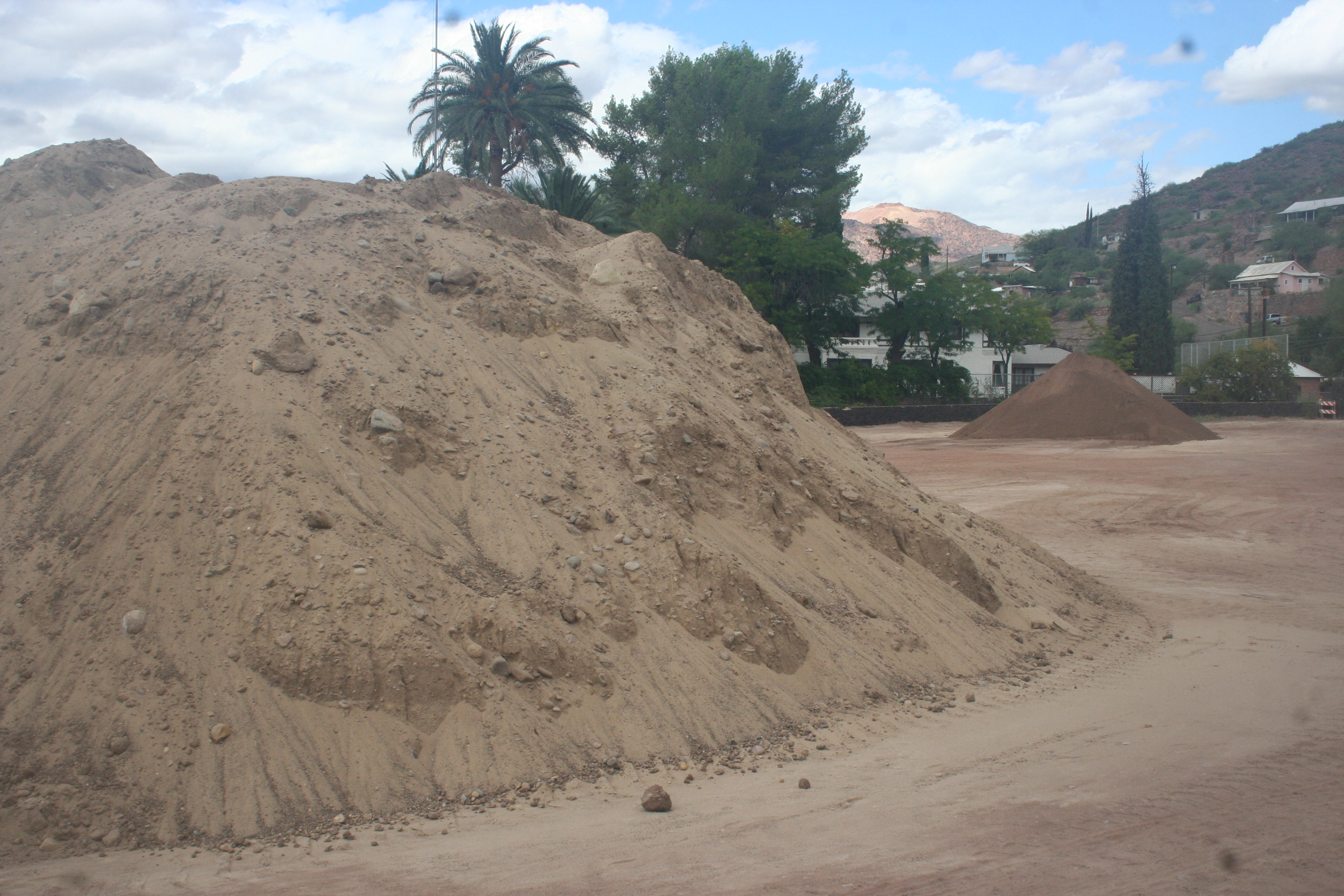 Photo By Walter Mares: Large piles of dirt are stashed in an open area next to the Freeport-McMoran, Inc. guesthouse while FMI installs a 25,000-gallon water recycling tank from which water will be used to irrigate Clifton’s first-ever soccer field. Water that drains from the adjacent splash pad will drain into the tank.

Freeport-McMoran owns a majority of and operates the giant Morenci copper mine. It is the largest open pit copper mine in operation in North America. FMI is also one of the world’s largest mining companies.

“FMI was not only generous, they were also forward thinking,” said Ahmann who, with McGaughey, did the grant writing for the town. She said when town officials met with those from Freeport, “We told them what our options were and what our finances were.”

Thus, the idea to recycle water for use on the soccer field was born.

The facility will be the first-ever soccer field in Clifton. Neighboring Morenci has at least three fields to accommodate soccer programs for about seven leagues that have long been in existence. The leagues include teams of all ages, from youths to adults.

The area which the soccer field is located used to be a residential area. That all changed after the October 1983 flood that ran at an estimated 90,000 cubic feet per second. It devastated much of the town, especially neighborhoods located along the river. Some homes were not completely destroyed or heavily damaged in the flood. However, since those homes were located in the floodplain, homeowners had to find other housing as they were not allowed by federal agencies to remain. That was the case for many homes in Eastside.

The splash pad sits where the Clifton municipal swimming pool once existed. It was closed in the late 1990s. At that time, some town officials said they feared a cavern existed underneath the pool because it was leaking water. No engineering study was ever conducted to back up the possibility of a cavern’s existence. Instead, it was far more likely water from the pool was draining into the river.

The pool was built in the 1920s and geothermal springs located along the river were used to heat the water. Clifton had high hopes of attracting tourists. However, the Great Depression that began in 1929 dashed those away.