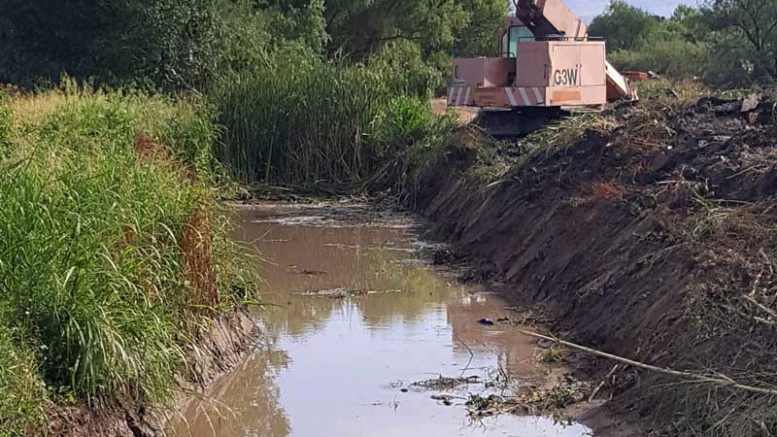 Contributed Photo/Courtesy town of Pima: A Gradall clears out a waterway in Pima in anticipation of debris-flow flooding from the Frye Fire when the monsoon rains hit.

PIMA – It is better to be prepared and have nothing happen than having something happen and not be prepared. That is the mantra the town of Pima is taking as it makes preparations for possible flooding from the Frye Fire. 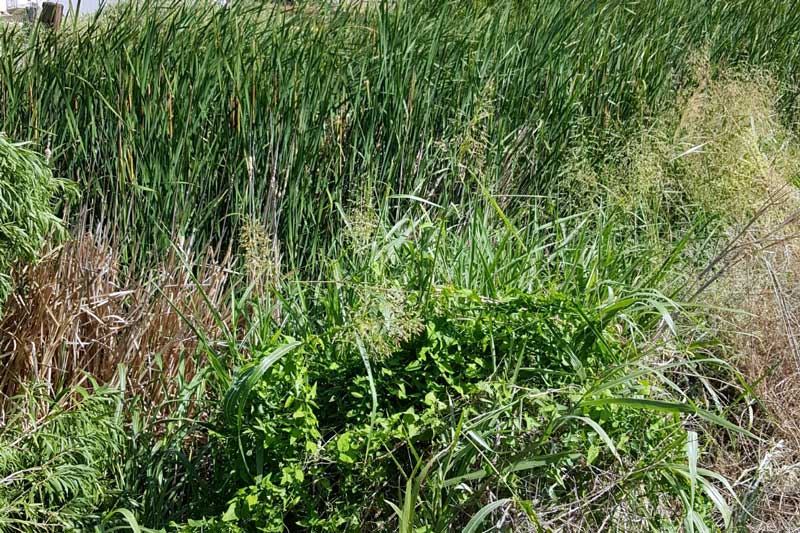 Contributed Photo/Courtesy town of Pima: Several areas were overgrown and already clogged clean water as it was.

With seasonal monsoon precipitation on the way, concerns about the fire damage on Mount Graham has switched over to protecting the areas downslope which could be affected by floodwaters carrying ash and debris. It’s the debris that has town officials most concerned.

“The ash being in our waterways isn’t going to hurt us very much, but the debris that could come down with it – the fallen trees, the pieces of trees, the limbs, things like that that they are anticipating coming down with it – that could be bad,” said Pima Interim Town Manager Sean Lewis. “It clogs everything up. Once you have something in the way like a tree or a bush or a bridge that’s not cleaned out that stuff (debris) will be held up there and that’s where the flooding event occurs.” 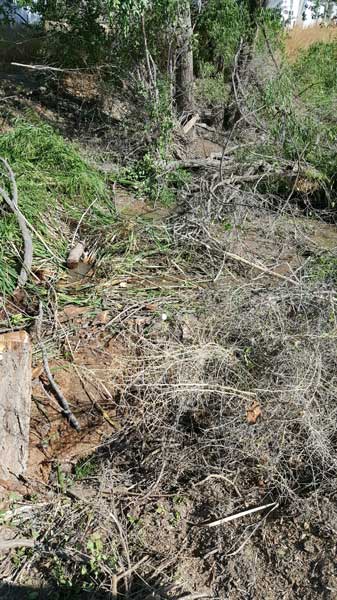 Contributed Photo/Courtesy town of Pima: Workers with chain saws cleared out the more dense brush ahead of the Gradall’s operations.

The Graham County Board of Supervisors previously passed a resolution Friday declaring a state of emergency for the Gila Valley due to the possibility of flooding. Graham County Health Department Director Brian Douglas submitted a grant application to the USDA for flood mitigation, with the priority being for Pima due to a doubled flood risk since the fire burned hottest above that area and in that watershed heavy rainfall could likely spill ash and debris into the town. The town of Pima has already received a 10-day grant that is paying for the waterway clearing and has applied for a larger grant to build a dike near 1200 South to funnel water into Rogers Reservoir.

“There’s so much potential for flooding coming from the mountain because of the fire – the lack of any plants or anything like that that is going to hold the water back,” Fletcher said. “And because of the heat on this side of the mountain in the old burn area, there’s a lot of ash and that seals off the land, so if we get some rain there’s not going to be a whole lot of it soak into the mountain. It’s just going to wash down on us, and we’re just doing everything we can to be prepared to channel the water into a natural flow and keep it in the balance of the waterways so that we don’t get any flooding here in town. “

After the remnants of Hurricane Newton hit the Gila Valley in September 2016, the Matthewsville Wash train bridge two miles west of Pima washed out after debris clogged up the normal flow of water and the torrent eroded the cliff side.

Lewis said the town has begun to clear out the waterways of salt cedar, bamboo, cat claws and other plant species that are already a nuisance and slow down the flow of clean water.

“When you then introduce the burned logs, the timbers, things like that, then you have a complete blockage,” Lewis said. “So, we’re going ahead of the potential rains and cleaning out the waterways through town.” 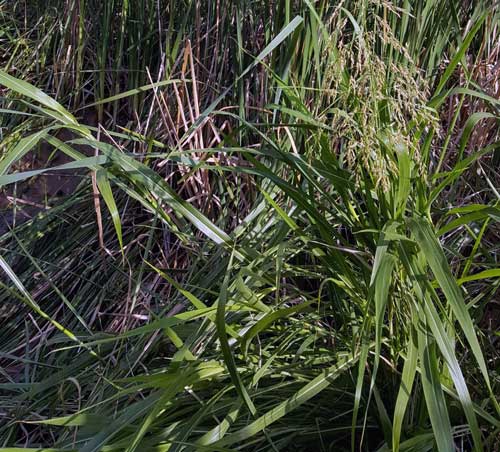 Contributed Photo/Courtesy town of Pima: Overgrowth like this is being removed to clear the waterways and being used to build up other low-lying areas.

With the grant, the town has hired a contractor with a Gradall, which is a type of excavator with an extending arm that is designed to dig and clean canals, as well as a couple of backhoes. Town crews go ahead of the Gradall with chainsaws and backhoes to clear a path. So far, the crews have worked on some smaller ditches through town and began work at Mud Hollow on Monday. Lewis said the work has been fruitful.

The program is beneficial on two fronts as all the muck that gets cleaned out will be hauled away and utilized in other areas to build up places that have been washed away or where dirt berms can be utilized. The town is working with Graham County on the project and said the county will utilize a good portion of the muck as well.

There are four watersheds that come down off Mount Graham with two of them, Ash Creek and Mud Hollow, that come together and join right in the middle of Pima.

The Ash Creek watershed begins at Ash Canyon, the aptly-named area that saw a significant amount of heat during the Frye Fire. 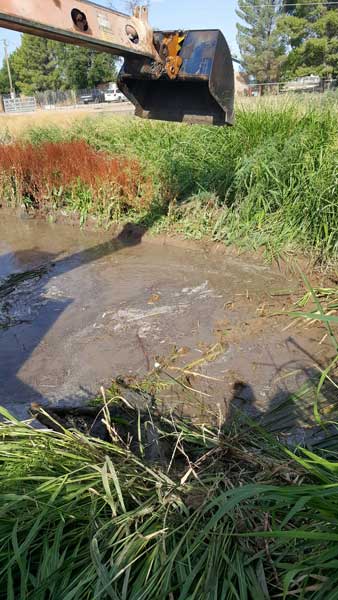 Contributed Photo/Courtesy town of Pima: A Gradall clears out a waterway.

As the watersheds join, they head northward toward Pima and run into the Union Canal, which crosses the town from east to west along its southern border. Pima also has three washes or rivers that carry water during storm events, including Ash Creek, Mud Hollow, and Cottonwood Wash.

“All of the rain that comes from Mount Graham (in the Pima area) drains and eventually runs into the Union Canal,” Lewis said. “The Union Canal could be completely empty and it still cannot handle that much water coming into it. So, the Union Canal breaks or breaches, and that’s what flooded us (in 2014).”

Lewis was referring to an incident in September 2014 where tropical storm Odile let loose with heavy rains that flooded Ash Creek and a torrent of water traversed through Mud Hollow and overwhelmed the Union Canal, causing a breach in two areas, above Main Street and near 800 South.

The town is also helping with the implementation of sensors on the mountain that will alert of water flows and tell how much is on the way. Additionally, it has applied for another grant to pay for the construction of a dike along 1200 South that will utilize concrete barriers to channel water to Rogers Reservoir. The town has already contacted some contractors to build the dike and should know shortly if they will be approved for the grant.

“We’re really getting ready for anything,” Fletcher said. “I hope that everything doesn’t happen, but if it does happen, we want to be ready and help protect our town as much as we can.”

Pima also has a pile of sand in front of the town’s shop on 200 East across the street from Dan Hinton and Pima Head Start. The town also has free sandbags but encourages only residents who are in an area with a high-potential of flooding to utilize the sand and bags due to a limited supply. Assistance will be provided to those who need to fill sandbags but aren’t physically able to do so, according to Fletcher.

“We’re going to do what we can beforehand, and if we don’t need to do it, at least we know everything’s cleaned out,” Lewis said.