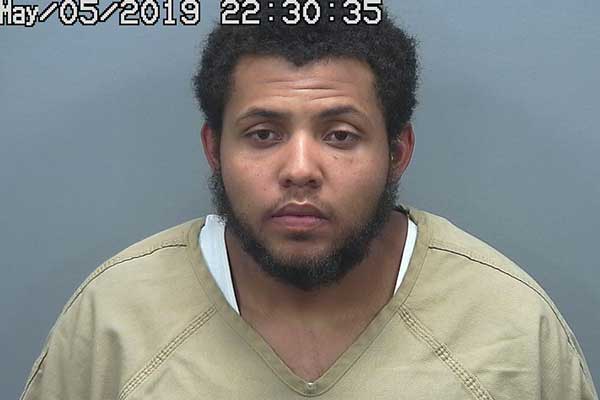 Goodrum, however, made an abrupt left turn onto 11 Street. The officer eventually found Goodrum parked on 8th Avenue and 13th Street. The officer approached Goodrum, informed him of the probation warrant and told him to get out of the car.  Goodrum asked if he could call his probation officer but the officer denied the request.

As Goodrum stepped out of his vehicle, the officer asked if he had any weapons on him. Goodrum said, “Yeah,” and started to reach for something with his right hand. The officer stopped him and handcuffed him at that point. While conducting a pat search, the officer found a .45 caliber Sig Sauer with nine live rounds concealed in Goodrum’s waistband.

The officer read Goodrum his rights and walked him toward his patrol car. Goodrum told the officer that the handgun was not his and that somebody had left it under the seat in his truck. He claimed that he had the gun on his person because he didn’t want it under the seat. After Goodrum was secured in the patrol car, the officer made a closer examination of the handgun and discovered that the serial number had been ground off.

When the officer removed the handgun from Goodrum’s waistband he had placed it on the driver’s side seat of the truck. While examining the firearm, the officer noticed a baggie lying on the driver’s side floorboard, which had a white residue inside. Another officer arrived and assisted searching the vehicle. Two baggies with crystal-like substance inside were found. The substance appeared to be methamphetamine.

The pickup truck had a bed-size toolbox in the back. When the officer asked Goodrum about it, he said that they would find all kinds of (stuff) in the box. When authorities opened the box, they found five more firearms in a green duffel bag. Two of the newly discovered weapons had the serial numbers ground off. One of the weapons was a sawed-off shotgun, which appeared to be shorter than the legal length of 18 inches. Two backpacks were also found in the toolbox. One of the backpacks had a 9 mm handgun, which dispatched confirmed was stolen.

Authorities also found a large amount of heroin, a digital scale, 2 large meth bongs and ammunition. They also recovered a wallet that had been reported stolen by a recent burglary victim.

Goodrum was transported to the Safford police station and his car was towed from the scene. While being interviewed at the police station, Goodrum denied ownership of any of the items found in his vehicle. He said that he knew the wallet was stolen but claimed that he had picked it up off the ground at an undisclosed location in Thatcher. Goodrum also denied using meth or heroin.

Goodrum was booked into the Graham County Jail on the warrant, weapons offenses, possession of stolen property and driving on a revoked/suspended license.