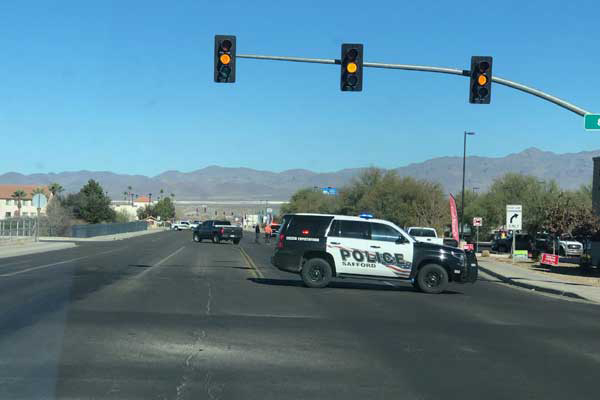 20th Avenue is closed to traffic while Safford and Thatcher Police officer investigate a fatal accident involving a vehicle and a person in wheelchair. - Dan Curtis Photo/Gila Valley Central

SAFFORD — Safford police were dispatched to the 700 block of 20th Avenue this morning at approximately 10:10 am in reference to a motor vehicle collision with a pedestrian. Officers from multiple agencies responded to the scene and located a male laying in the two-way turn lane of 20th Avenue, between Walmart and Home Depot. The vehicle involved was located in the Safeway shopping center.

Officers and ambulatory personnel began treatment of the male, who was transported to the Mount Graham Regional Medical Center. The man was later pronounced dead at the hospital.

The female driver and vehicle were contacted by law enforcement personnel for investigation. A drug recognition expert conducted an evaluation of the driver, which resulted in no signs of impairment from substance abuse.

The investigation is ongoing, but based on witness statements, evidence collected from the scene and video surveillance, it is believed that the male was operating a motorized scooter and was leaving the south entrance of Walmart heading westbound onto 20th Avenue when he was struck by the vehicle.

The victim and driver have not yet been identified. Gila Valley Central will update when more information becomes available.